Inter shows a lot of heart as the team displayed effort and pride, if not quality

Inter wins at home 1-0 against Parma with a lot of players that weren’t considered good enough just 9 short months ago. Watching this game I think that I can say that Parma looked like they were in better physical shape. After the fact, I think that the consensus best player for Inter was Jonathan – more on this later.

When I was writing the preview, I said that the only criterion I can judge this team by is their attitude. I can’t judge the talent, because it’s all in the infirmary. I can’t judge the team’s preparedness because there’s basically a taping tendon to bones session scheduled in training. All I can do is just see if this team will fight or roll over.

If it fights, then viva Strama, as far as I am concerned. Benitez couldn’t get someone to lend him money for the soda machine, let alone get a player sweat, bleed and fight for the team. Gasperini, I get the impression, had people laughing at him behind his back. And by the time he left, the only emotion I think Ranieri got from players is the ol’ side of the eye nasty glare. Leo motivated people, but I wrote at the time that I thought he was tactically naïve – which I was willing to overlook, having just lived through "Mr. Charm" Benitez.

Obviously, if the team decided to roll over then, morte Strama. But that wasn’t the case, here. , for all its faults, works hard. They have a lot of nice athletes, if not great ball players, so working hard against them is essential. And I thought the team worked as hard as they could, considering I don’t think that there is a lot of gas left in the tank. The goal came at the end after another foray into the Parma penalty area, so it wasn’t an event in a vacuum.

Getting to the performance of the players, there were ups and downs and I am going to say it right here, I do not agree with the Curva on the subject of Schelotto. Do I think that he had a bad game? Darn tootin’. Do I think that he’s had a series of bad games? Darn tootin’. Do I think that he’s a wasted transfer? No, I do not. And I don’t think it was a bad one either, although time might prove me wrong on this one. I’m sure that I am in the minority on this and that I will have ample time to further defend my reasoning in the future, so I will drop it for now, only to say that he had a bad game.

And its only on the final ball that I think he failed at. He obviously got into the area with no difficulties. He ran well, the effort was there. He made many more passes than he didn’t (92% pass success according to Who Scored?) or than say, Gargano on his best day ever. But when given the opportunity to score, the young man couldn’t do it. And he wasn’t the only one who had a bad day shooting in what was not a beautiful match for those that like the technical/tactical battle of 2 finely honed, well trained and sharp teams.

And Schelotto is a prime example of this. He’s pressed into service because of injuries. He was a cast off from his own team in which he was sat in the stands for a month before he came to Inter. When he got here, like Rocchi, he had to get on the fast track to shape while learning about how the team plays as well. This isn’t the situation that makes for elegant football. But right now it’s what we got. And yesterday, it showed. Now I am not making excuses for this person – if given a whole summer to train with the team and get into shape, he still can’t do more to help Inter, then he needs to go. But he’s not playing well right now, and this is why. I am, by no means, saying that it’s okay.

Also on the down list, in my opinion, is Alvarez. Alvarez showed a lot in recent weeks about regaining form, but I don’t think that he did so much yesterday. Is he tired from the midweek game? I can’t see how he can be. He should have a lot of energy stored up from all those weeks sitting on the bench. To his credit, I saw Alvarez play defense more than I think I ever saw him – this is intended to be a compliment for yesterday and a criticism of every game I have ever seen him play before this one. If this is a sign of things to come, fantastic. If it’s merely a blip on the radar, then I am not happy. Palacio, when on the field, ran rings around this guy and still managed to put the ball into the net from the same position while giving up 5 years. Right now, I can’t imagine Alvarez not being on the sell list. And I am rooting for him, but if he wants to stay, he needs to produce either goals or effort. We got some effort yesterday. He can give more.

If you asked me who were the top 5 players for Inter yesterday, I would have no problem telling you: Handanovic, Jonathan, Kovacic, Zanetti and Rocchi.

Handanovic did his job by preventing at least 2 goals. A decent keeper should be able to stop 1 sure goal every 2 matches or so. But Handanovic had great positioning on a break away and he showed athleticism on at least one other spectacular play. Inter had a short black out, about 10 minutes long in the first half in which the defense lost it’s head and Handanovic had to basically keep the score down with some good positioning and a lucky post. That positioning did as much as anything to force poor percentage shots. The post hit was a long, curving banana by Valdes in a desperate attempt to beat Handanovic who had every other shot completely locked down. It was a good solution to the problem and only centimeters off target. Handanovic just exudes professionalism between the sticks when he’s on his game.

Jonathan, unlike Alvarez in my opinion, is using the fact that he has no wear or tear on him all season to absolutely bring it these last few weeks. He’s the freshest man in all of Serie A, and all it took was for him to be god awful enough to never get chosen. But he’s there now and he’s not making nearly the mistakes he was making in the beginning of the season when everyone was as fresh as he was. So I say let’s ride his comparatively good form just as long as it lasts until we sell his ass this summer.

There is not a single bigger difference maker on this team right now than this guy, Mateo Kovacic. You guys are going to get sick of me writing about his kid this summer. But I am entranced every time I watch him play. He runs, he passes and he directs the ball to the right people and then makes himself available to get the return pass and advance the field. There is possession in the midfield. There is something to build on for the future. This kid is phenomenal right now at 18 freaking years old. He touched the ball about 100 times yesterday and had about a 90% pass completion percentage, but that’s not the most impressive thing I saw. Yesterday as I watched the game, about 3 times I saw him make these long through passes to Rocchi that were having a hard time getting through. So what he did was start making through passes on the diagonal to Jonathan, Schelotto and Kuzmanovic that got through and were just so dangerous that you just thought that something would happen from these. Sure enough the goal was off a through ball to Jonathan that he laid up to Rocchi right in the middle of the penalty area. It was just a mature and patient thing that showed understanding for the scheme and how the players were arrayed.

Imagine what might happen when he can speak Italian…

Lastly I want to talk about Rocchi for just a minute. Here’s the thing, I know that everyone had a joke or a gripe about him joining the team – and this includes me. But consider his style of play and not the specific man or his age or his declining physical ability. Can you get that in your head? Okay. That’s the kind of guy up front that will do well with this team. A forward who is athletic enough to operate at times alone, who can pass well enough to be part of the build up himself, who can hold the ball for a second while others join him in the attack and finally someone confident enough that will take a shot at every half opportunity. Most importantly this mythical player needs to be enough of a presence in the middle defense by himself to open space on the flank for others to work with. While it’s humorous to make fun of Branca or Strama or whomever made the decision with Rocchi – again I count myself amongst them – I give someone credit for finding a good fit for a 5th choice forward, cheaply and without a real contract. It could have been much, much worse… and yes I have about 3 names – that don’t necessarily belong to this team - that make me shudder. Have a guess, its fun! 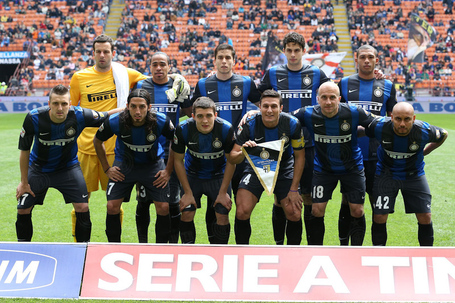