There isn’t much to say about this one, tactically other than, the best team on the day won 3-1. Other than Alvarez, there weren’t any forwards on the field but Inter still managed to score a goal. So there clearly was some desire to do something. But I think that, just as obviously, once it was a 2 goal gap there was a lot less steam. Is that just bowing to reality or is there some lack of fight? I don’t know.

Ranocchia and Chivu were both "gritting their teeth" in this one, supposedly. Ranocchia will have knee issues until the day he dies at this point, so I suggest that as long as he’s on this team, we get comfortable with this story. I don’t know how much longer the team will put up with Chivu, because my patience is totally run out. He has something like 10 league apps and still at the upper level of earning level. But let’s be honest, now isn’t really the best time to evaluate because all the judgments are going to be tainted by the current decrepitude. After the last kick of the season, and all the tempers cool a bit, that will be the best time to evaluate the positions as a whole.

Right now, I am favoring a vet clear out for perhaps the 3rd season in a row. My early bird prediction? That opinion won’t change too much.

I will say this, if our midfield of Kovacic and Kuzmanovic was in effect when we had Cassano, Milito and Palacio on the field at the same time, the attack would have been breathtaking. It better be, because I don’t think either one of these guys is worth much defensively. Strama already has leaked some ideas for next season that include stacking these guys - with Kuzmanovic as the midfielder and Kovacic as the attacking midfielder. Maybe we might run Obi, or , or Guarin, or someone next to them.

In the attack, Alvarez is looking a different guy than we saw all year. He’s lately become a lot more aggressive and it’s paying dividends. Last season he was much more diffident when moving forward and would have been happy to pass or take a long shot. Now he looks like he wants to move into good position in the area and score.

But all that kind of skirts the issue that the team that ran onto the field just wasn’t good enough – nor should it have been. With something crazy like 13 injuries, fully 2/3ish of which are major contributors – first team or first-ish off the bench – there is not a team in Serie A with that kind of depth.

And if that sounds like I am making an excuse, okay sure there might be an element of that. But it’s also reality. is a good, if thin, team and we were playing kids against men. With a full compliment of players with fitness, we gave a good game. Without those guys, we were spanked. And it’s okay. We should have been. I don’t agree with people who say that Inter, despite the circumstances, should be better. A great coach once said, "You are what your record says you are." I used that quote before against other people using injuries as an excuse. And I am going to say it to myself – we aren’t a good team. Whether that "goodness" means that we don’t have first team talent or depth of talent it doesn’t matter. We are what we are on the table, right now. Does this mean that I have no hope for the future? Does it mean that I forget what people are saying about us right now? Not on your life. I won’t forget. Just like I didn’t forget that people were crowing about our cutting Lucio last July… 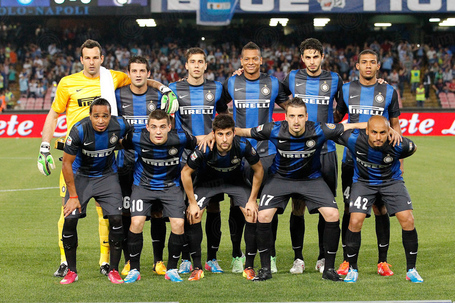