There we have it ladies and gentlemen. Pazza Inter at its finest. Yesterday’s game was amazing on all levels and I couldn't be happier with what took place. What a response by the team to pull a victory out of a rather bleak looking situation.

Share All sharing options for: Pazza Inter 2 v 1 La Viola - The Game That Actually Was

We all know what’s and whose coming in this section of the write up. Firstly, I will like to take a moment to talk about my new favourite pre-Madonna Freddy Guarin. A lot has been said about his performances in recent weeks and rightly so, as he hardly been living up to the hype and playing to his potential. His performance last night was again one to be forgotten. He misplaced passes, gave away possession, and constantly made the wrong decisions both offensively and defensively. Freddy’s lack of defensive work was the reason for Fiorentina’s whooping 61% possession stat in the first half. He should be dropped no questions asked.

But for who? This is the question I posed to myself this morning when thinking back on all these happenings. I came to the realization that Guarin is the best option given the current squad’s handicaps. We all know that Mateo should be starting, but I for one do not what to play the prodigal son until he’s fully fit. The same goes for Il Principe. Taking this into account we’re left with 2 options:

1. Play an individual (e.g. Kuzmanovic or Olsen) who isn’t ready either mentally or physically for that position or;

2. Drop Alvarez into the midfield 3 and place either Belfodil or Icardi at point with Palacio as second striker.

Both are viable options with the latter more so than the former, but neither I believe that WW will implement as he wouldn't want to offset team balance by shifting players when they are all playing so well. What we’re left with is a waiting game. We must now all understand the dynamic of the situation, myself included. We must bear with it until Kovacic becomes health or until the tactical system changes in order to account for our faults.

Secondly, I want to talk about the ugly scenes that took place at the San Siro when Guarin was being substituted. The boos where loud and clear. The entire stadium was fed up with Freddy and his play and he reacted in the worst way possible to the jeers. Drewseph summed up my thoughts quite nicely:

Booing Balotelli after he throws fit after fit and wears a Milan jersey — understandable. Booing Vieri when he goes out of his way to antagonize the club and refuses to celebrate his goals — also understandable. Booing badly performing players when the team is completely out of sorts and playing like garbage for weeks upon weeks — probably misguided, but understandable as a sort of outlet for general frustration.

Booing a player who hasn’t playing great while the team as a whole is doing extremely well — totally lame and counterproductive.

Too true. The fans at the stadium are only going to make things worse for Guarin if they continue to boo him during games. Hopefully, the words of Moratti and Mazzari reach their ears and they curb their negative attitudes before it really starts to have adverse effects on our team morale.

Juan Jesus. The penalty he gave away was quite 2012 of him. I hope that this was just a hiccup and an incident like it doesn't happen again.

Jonathan. In the first half I saw a Jonathan who was unsure of what he was doing when it came to the final 3rd. He wasn’t sure whether he should look for a pass or try to beat his man. This usually left the team in limbo and him losing the ball. 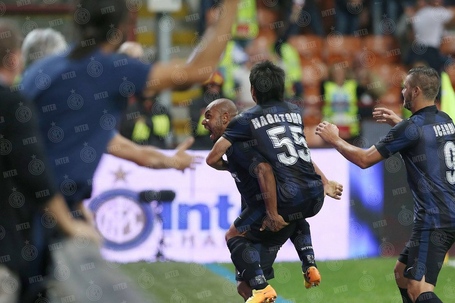 Mazzari ability to change tactics on the fly without making the team lose its balance astounds me. Even though I want to say that Montella help Walter by taking off their main goal threat and their most creative player, I have to give credit where credit is due. When the second half came, the team, most notably Jonathan, were completely different. Jonathan, for example came out with conviction and drive. Tactically, if I’m not mistaken, he was told to overlap and beat his man which he did to great effect.

Alverez and Cambiasso had monster games. They both look like reborn players under this new regime. Ricky is starting to look more and more like Kaka in his prime (I would like take a moment to laugh at the people who laughed at me when I said he had the potential to be a player like Kaka in his prime) and Cuchu is starting to look like his old self with a hint of Van Nistilrooy. I mean, come on! Did you see that finish?! I believe that these 2 will keep churning out performances like this all year long. The difference between the players this season and last is fitness and coaching. Clear ideas communicated properly goes a long way in the grand scheme of things.

This game saw the true test of our character. For the first time under Mazzari we found ourselves chasing a game. The team responded wonderfully and dug deep to give a response worthy of the title "Pazza Inter". If you asked me, we wouldn't have won this match had we not gone behind. Their penalty was exactly what we needed to kick our asses into gear. Juan gave us a blessing in disguise, but one I wish we didn't need.

+ Mazzari can change tactics on the fly without sacrificing balance

+ Ricky and Jonathan continuing their resurgence

+ Kovacic looking fitter by the minute

+ The quality of finishing displayed by both Jonathan and Cuchu

- Jonathan indecisiveness in the first half

- Guarin’s response to be booed

- The stadium booing Guarin with such venom

- Breaking Bad is coming to an end 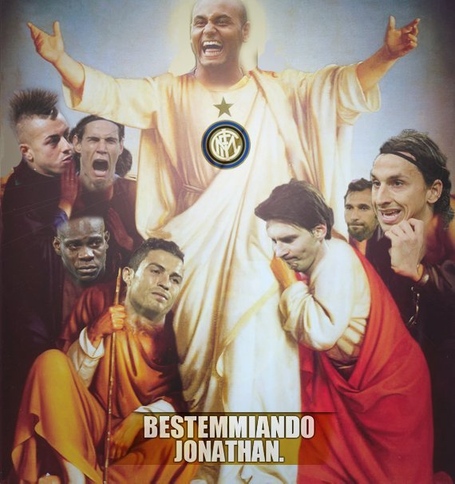