Inter start 2014 off with a sputter as they lose to Lazio at the Stadio Olimpico.

A new year always brings out a fresh outlook and hope for the upcoming twelve months.  This is potentially more pronounced with sports, as players and fans alike want to start the year out on a good note.  With 2014 underway, Inter started the second half of the season's campaign in the Italian capitol, away to Lazio.

Lazio underwent a change of their own the weekend right before the restart of Serie A, as they fired Vladimir Petkovic and hired a former biancocelesti coach in Edy Reja.  As difficult of a ground the Olimpico has been for Inter, the change of managers for Lazio undoubtedly made the task more challenging.

Inter have also struggled this season coming out of lengthy, international breaks.  Would this trend continue even though players were off for the holidays and would Inter start 2014 with a flash or a fizzle?

The match started at a good pace, with both Lazio and Inter possessing the ball and trying to attack.  As the minutes ticked by, the home side started to assert themselves and placed the Inter defense in precarious situations.  Right after the ten minute mark, Jonathan misplayed a ball that ended up bouncing over his head.  Luckily, no Lazio player was able to pounce on the miscue.

Reja had to make a substitution early on, as Konko received a concussion and was replaced by Cavanda.  This did not interrupt the flow of the home side, and they continued to go at the Inter backline.  Jonathan and Nagatomo were placed under pressure, as crosses were flying over their heads into the penalty area.

The biggest splash in the first half came ten minutes before halftime.  Dias had fouled Guarin hard for the second time in minutes, and in return, Guarin fouled Lulic.  The Colombian received a yellow but Lazio's Radu was not satisfied and started getting physical with Guarin.  Radu also received a yellow and Guarin somehow ended up on his back.  Despite players from both sides surrounding referee Damato, no one was sent off.  Half time could not come soon enough and both sides went in with the score tied at 0-0.

The second half was a continuation of the first for Inter, although Mateo Kovacic's introduction in the 60th minute did spark and help connect the black and blue.  Not even two minutes passed before the Nerazzurri's first real chance at goal as Nagatomo's wicked header forced a save from the Lazio keeper.  Things were looking better in attack, especially when Diego Milito made his highly anticipated return to the field in the 75th minute.

Unfortunately Inter were not able to capitalize on any of their possession, as Lazio scored on a Klose volley after Candreva crossed the ball into the area.  The home side seemingly pulled the goal out of thin air, especially after the Nerazzurri seemed to finally be up and running ever since the introductions of Kovacic and Milito.  None of the Inter defense had marked Klose, who was able to float in between Jonathan and Ranocchia.

Javier Zanetti was thrown on as Mazzarri's last substitution, with the manager taking Ranocchia out.  Inter's best chance came courtesy of Milito and Palacio.  Il Principe had the ball on the left, steaming towards the penalty area when he passed it over to Palacio, who was not able to find space to pull the trigger.   La Beneamata were not so fortunate on the night, as Lazio took all three points with a 1-0 score line. 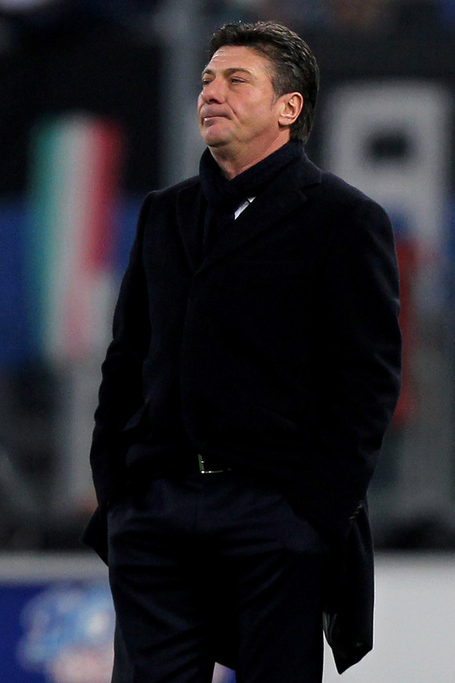 Candreva was a thorn in Inter's side tonight, as he challenged the Nerazzurri everywhere possible.  There was no place the ex-Juventus player left untouched.  He ran at the Inter defense down the flanks and through the middle.  Even though Juan was able to defuse his threat throughout the match, he made the Milanese side pay after crossing the ball that turned out to be the undoing of Inter on the night.

The tactical formation of Mazzarri does not link the midfield and striker well, which forces the Nerazzurri midfield to resort to long balls over the top to reach Rodrigo Palacio.  Palacio is also forced to track back for touches on the ball.  El Trenza did so during the match, taking the ball off different Lazio players but unfortunately not resulting in anything as he usually is the only one in attack.  His role changed after Milito came in, not to mention nearly 85 minutes had passed by the time he had a real chance at goal.  With Milito back and Mauro Icardi returning, it will give Palacio the help that everyone has called for.

Finally, a quick word on Fredy Guarin: After his reaction to being substituted in the 75th minute, I think the Colombian's time in the Inter shirt is slowly coming to an end.  (Editor's note - If/When Fredy Guarin goes to Chelsea and becomes a really good, consistent player, I don't even want to hear the whining of Interisti saying that we should have kept him!)