Forget the sacking of Jose Mourinho - the real news today is obviously Inter Milan's new leaked kit, which may or may not actually be the kit they'll wear next season!

Forget the sacking of Jose Mourinho - the real news today is obviously Inter Milan's new leaked kit, which may or may not actually be the kit they'll wear next season!

The leak comes from the historically accurate kit-leaking site Footy Headlines. The overall concept of the kit is on par with what one might expect from a typical Inter Milan jersey, but with one big added detail: a bright Nike-yellow accent. 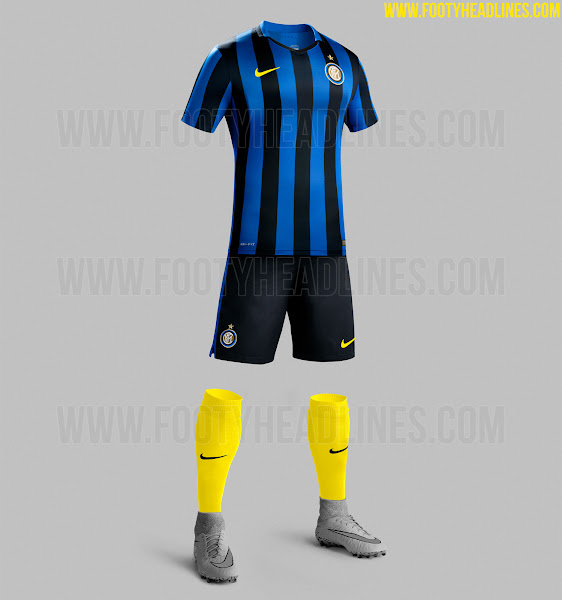 Another thing you'll notice in this link is the absence of the giant Pirelli logo which normally adorns the Inter shirt. That's because Pirelli's sponsorship contract with Inter expires at the end of the current season, and it's not a sure thing that the two parties will renew the old agreement. (As you may recall, Etihad has been heavily linked to take over the contract next season.)

While yellow (or gold) has traditionally been a common accent color on Inter Milan jerseys, the use of such a high-visibility, almost neon yellow is a fairly new concept. Yes, Inter have a third kit which is predominantly a bright yellow color, but as an accent color the yellow has almost always manifested itself in a much more subtle manner.

I quite like this leaked design. I love that it's both classic and modern. I'm a fan of neon colors as accents on jerseys in general (Japan's World Cup kits with the neon pink accent were dope), and I think Nike has executed their game plan to perfection here.