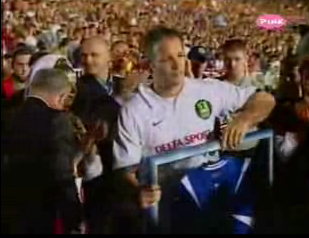 Jesus what the hell. I don't care what the Novi Sad citizens here say, that wasn't a football match, it was a travesty. Those of you that watched it know what I'm talking about. Those of you that haven't, you should feel lucky. That moment where Sinisa's little son took a shot at the goal (in an Inter jersey!!!) and Vlade Divac pretended to slip up in order to let him score made bile climb up my throat. But I do admit, Figo bullying the bespectacled referee made me laugh. Let me get this straight - I love Sinisa, I'm a big fan of his, a huge fan, but a player of his calibre deserved a decent, comptetitive testimonial. This looked more like a family picnic.

And the "full-strenghth Inter squad"? Hah! It had Choutos damnit. I'll admit, Samuel, Adriano, Cordoba and Zlatan were there too but hey. Choutos. Poor guy. Fabian Carini had national team commitments, otherwise I reckon he'd be there too. Fabian who? Exactly.

Zlatan's interview was a laughfest. His Serbian (Bosnian, Serbo-Croatian, whatever you wish to call it) was hilarious. These two lines are my favorites:

[The words that are italicized in the transcript were said in English.]

The fact that he can't remember the Serbian word for "happy" aside, you gotta give him props for trying. And his blunders with conjugations and declinations looked really adorable. After all, Serbian is a pretty tough language, and he is a football player.

They did an interview with Vieira too, but I can't find it on YouTube. He looked pretty disgusted with himself. Being dragged to a small, unexotic country by a man that called you "black piece of shit" and being forced to watch a completely pointless, boring excuse for a football game surely isn't something you'd call pleasurable. Also keep in mind that Vieira was injured at the time. Speaking of which, Patrick Vieira got injured when he collided with Roma's Rodrigo Taddei. Rodrigo-Ferrante-Freaking-Taddei. Am I the only one who finds that hard to believe? Anyway, moving on.

If you really really want to see what happened, there is a pretty decent compilation of the entire thing here. The fireworks were pretty neat, I guess, but I dare you to push the slider to 02:20 and not be disgusted. I dare you.

How the hell did "Sini" get the Inzaghi brothers and Vincenzo Montella to appear on this thing is beyond me.