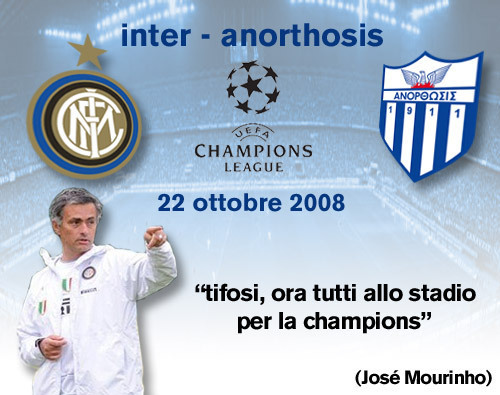 Anorthosis is even on points with Inter in Group B, having beaten Panathinaikos (3-1) and drawn Werder Bremen (0-0). In fact, our standings are exactly the same across the board. Anorthosis are at the top of the Cypriot League and last year's champions. They have won every single one of their CL qualifying rounds and are undefeated this year. Clearly, Anorthosis Famagusta are not the minnows we had hoped.

Inter counter this with being at the top of their form. Morinho has said that the team is finally becoming the one he imagined. Zlatan is undoubtedly completely recovered from his injury woes and in the scoring mood. The boys are confident and want to win. Still, according to Mourniho, all this confidence could come around and bite us in the collective ass:

This match has several hidden dangers. You never know how a side will react after playing a wonderful game like we did in Rome. We would not be the first team to slip up after a fantastic display, so we'll have to do everything we can to avoid this.

This is a critical game in our march towards Roma and the Champions League final in May. Mou is counting on a win from both this game and the return match. Anything less would "complicate" things.

True, right now we are the favorites to win, but Anorthosis are the loveable underdogs that everyone roots for. I have no problem with them continuing out of groups, just so long as we finish at the top. So lets take a little look at... 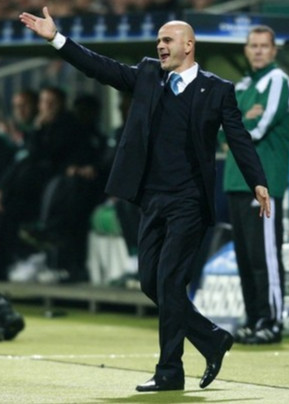 As I said, coach Temuri Ketsbaia brings a very successful team to Milan. He has built an international squad that includes such players as Greek defender Traianos Dellas, French midfielder Cedric Bardon, and Brazilian forward Savio. After looking at their lineup in the Panathinaikos game and scanning through their web page, I have decided that I have no idea what their formation will be. Goal.com is predicting 4-5-1:

On the injury front, Portuguese midfielder Paolo Costa is out so Bardon will likely take his place, and Captain Nikos Nikolaou is a maybe to start. In their last Champions League game, they beat Panathinaikos 3-1, but a closer look at the circumstances shows that one of the Anorthosis goals was a Panathinaikos own goal. The other two were clear defensive errors from Pana. From the highlights I have watched of their CL games, it looks like Anorthosis play a defensive game and will likely stack the back and hope to catch us on the break. 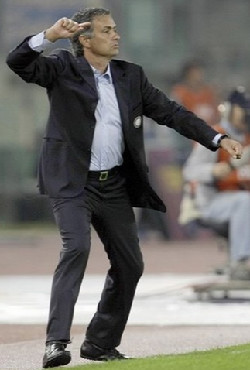 Well, we are on track and ready to win. Toldo will start in goal, and hopefully Adriano was not late for training today and can actually play. At least he is on the squad Mou has called up:

If I were to choose the lineup it may go a bit like this:

As long as we treat this game like it is Roma at home - that is, dont underestimate the opposition and keep our wits about us - we have a shot of going to the top of the group. We have a strong squad, and, as players return from injury, finally a little wiggle room at the back (knock on wood, light candle, thow salt). I think this game will be difficult, largely because we will have to break through a 9-man defensive wall without over exposing ourselves (and not in the dirty way). Anorthosis are coming to Milan expecting to loose but hoping for a draw, which means to me that they will play like they have nothing to loose. I am going to be conservative here and predict a 2-1. We will beat them, but they will make us sweat for those 3 points. 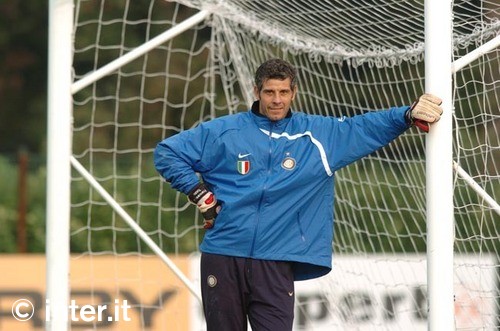