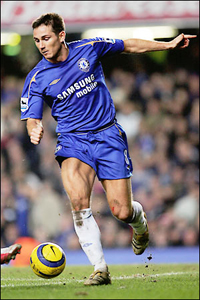 The will-he wont-he rumors about Frank Lampard have just heated up a bit. According to Channel 4 - Football Italia:

Frank Lampard arrived in the peninsula this weekend to complete his £7.5m transfer to Inter.
Reports emerged last night from France Football that the deal had been struck and it is now believed the Chelsea midfielder is already in Italy to undergo a medical.
The Italian media claim he arrived in Positano last night and will be in Milan to put pen to paper later today.
Lampard is provided with a four-year contract worth £5.8m per season – almost a £2m increase from his Chelsea wages – and the club receives £7.5m.
The England star had only one year left on his contract with the Stamford Bridge side and was eager to reunite with new Inter boss Jose Mourinho.

So we should all be happy, right? Wrong.

Inter have denied that Lampard is a done deal and Chelsea say they are not going to let him go without a fight.
Scolari wants him and the club would like to hold him to play the last year out on his contract. A "club insider" had this to say:

Frank is priceless to Chelsea and is not for sale at any price. There are further talks planned with Frank and his people and a very lucrative contract offer will be made to him.
In the unlikely event he decides to turn down a new contract offer we would rather hold him to the final year of his existing deal than entertain the thought of allowing him to join another club.

Now, Lampard has always said he would prefer to stay with Chelsea, just that he would like a 4-year contract. Chelsea have only offered him a single year due to his age. Really, this sounds like a bargaining tactic and the sad truth is, there is nothing Chelsea can do. If Frank wants to leave, he can - for about 8 million euros. As much as the clubs say otherwise, they do not own payers - players are not chattel. Besides, why would you hold someone who does not really want to stay. Madness.

Just in case, lets learn a bit about Lampard, shall we?

Frank Lampard was born June 20, 1978 (buon compliano!) in London. He comes from a football family - his father, Frank Lampard Sr., was a full back for England and West Ham then coach for West Ham.

From what I have read, he has been a hard-worker for Chelsea: he is Chelsea's top scoring midfield player ever, in 2006/7 he had the most game appearances by any Chelsea player in any one season (62), and "No-one of his age has enjoyed more Premier League football and no-one plays more often at Chelsea."

Oh, and although he missed some of this last season due to injury and bereavement (his mother died - we are sorry for your loss, Frank), his equalizer in the CL final this year gives him 20+ goals a year for the last three seasons (110 goals for Chelsea in total). Not bad for a midfielder. And anyone who saw that CL goal and the look on his face when he scored... I tell you, it brought a tear to my eye. Pure drama.

I think everyone can agree, aging or not, Frank Lampard is a quality player - at least he has been for Chelsea. My question is: will he be for Inter? He claims he is fit and has many years of world-class football still in him. Certainly Mourinho holds his abilities in high regard. There has been a tradition of top-notch English players failing specularly in Italy. I think this is a thing of the past, though. Football is global now. Players are much more flexible, and fans are used to players from all over the world on their teams. If we can pull this off, it has the potential to be quite a coup for Inter. 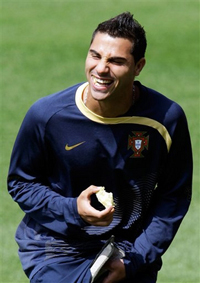 Although there has be a lot of "he is coming" then "no he is not" surrounding his possible transfer to Inter, most of the reports are now decidedly in the "he is coming" camp - and not just on Goal.com.

Reports are that Inter and Porto have agreed to €35million in cash. There was some talk of a Pele going to Porto on loan for next season, but apparently that is no longer a requirement. These same reports claim that Inter and Ricardo have already agreed to personal terms and he is coming to Milan for a medical next week.
So there you go.

And while Branca was meeting with Porto about Quaresma, they may have also discussed Bruno Alves. Alves is thought to be second choice if Carvalho does not pan out.

La Gazzetta says that Inter a still interested in Mancini, and the stumbling block is the transfer fee. Roma want 15 mil euros but Moratti says he will outlay no more than 10. Inter tried to sweeten the pot a bit by offering either Suazo or Crespo, but the salary of either player is more than Roma's salary cap allows.

Our old friend Alvoro Recoba will leave Inter this summer. His contract expires on Tuesday (July 1) and I think everyone agrees, a new one will not be offered. Apparently Qatar have shown interest but he is holding out for spot in Serie A - Palermo or Bologna to be exact (Bologna are after Celtic's Nakamura, though, so there may not be room for Recoba there).

Recoba (El Chino) came to Inter in 1997 from Uruguay and was part of the squad that won the UEFA Cup that season. The next year he went to Venezia where he had 11 goals and 9 assists in 19 matches. Not bad. El Chino returned to Inter for the 1999/2000 season where he had his best showing: 10 goals in 28 Serie A appearances. In 2001, it came out that his papers were a forgery and he was punished with a 4-month ban. For the next four years, he played well, but by 2006/7, he announced his decision to leave Inter, citing his lack of playing time.

Torino did not work out well for him, either. My last real memory of him as a player is his incredulous head-shake from the Toro bench as Inter beat Torino 4-0 at the San Siro. Poor guy.

I will remember Recoba's time at Inter fondly - although I really only caught the last few years of it. When he was on, he was a joy to watch.

Aguri El Chino. I am sorry it didn't turn out better for you at Inter. We had a great run, there, though, didn't we?