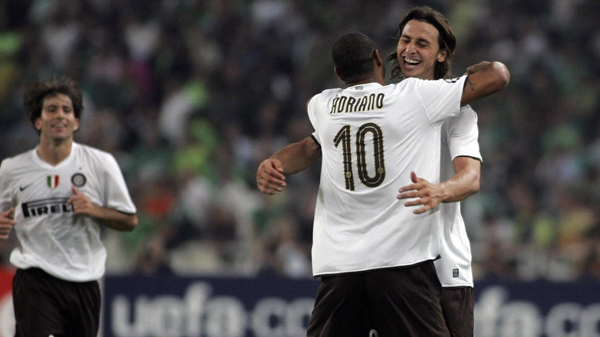 First of all, that Champions League game was fan-freakin-tastic. We finally got that win I wanted: 2-0. But better yet, Ibrahimovic had a brilliant game, putting aside his reputation for checking out, and Adriano made his triumphant, goal-scoring return. Ibra played such a good game, in fact, that Henk ten Cate, Pana's coach, thinks that Ibra is "the best striker in the world" right now. Mancini played well, bagging his first goal in the black and blue. Maicon continues his wonderful form and I thought Marco was better with his distribution. We walked away from Athens with 3 points and smiles all around. I am feeling confident for Sunday. Bring on Toro!

Well, first I thought we might like to relive it a bit (just turn away at about 2:33 when Pana catches JC totally flat-footed. Thank goodness for the woodwork!) Enjoy: 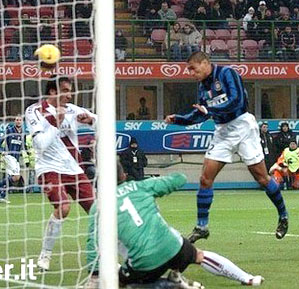 Where: Stadio Olimpico, Turin
When: Sunday, 3pm local time (6am Pac, 9am East)
How to Watch: "Live" on Fox Soccer Channel or find a stream here.

First of all, I know this preview is early, but I have to go out of town this weekend (family junk) so it is now or never. In addition, since I wont have access to a computer until Tuesday and Inter must be represented here, my Significant Other has agreed to watch the game and post the review. He has injured his back and is doped up on vicodin so be gentle with him.

Well, we know Muntari will not be playing - he has been handed a 3-match ban for the red he received against Catania (Inter are appealing the ban). Add to that Samuel, Stankovic, Rivas and Jimenez who are all still on the injury list.

So, what about a line-up? I think it will be very similar to the CL line-up:

Another interesting addition to the squad is Obinna. Victor Obinna has been added to Inter's squad roster and given the shirt number 21. Apparently he is training with the first team but I have no idea if he will get any play time. I suspect that come Christmas, Obinna will find himself at another team on loan. We just do not have the space right now.

Torino have been on a bit of a run, and right now, they are actually above us on the table (due to goal differential). In their first fixture, Toro pummeled Lecce 3 to 0 (ouch). Then last week, Torino scored two more against Reggina; unfortunately, one of those went into the wrong net and the game finished in a draw.

To add a little boost to their step, Torino had a mid-week friendly against the amateur team Busca today. The game was a route, as was expected, and at the whistle, it was Toro 5-0 Busca. I guess they figured that since everyone else had a mid-week game, gosh darn it, then so were they.

Here is a possible line-up (courtesy of C4):

Here is what happened when we played in Turin last year:

We won, but just barely. It was last spring and Inter was in their blue period. Still, we hunkered down and got the three points. Last week at home, we were not exactly stellar - though the boys had their moments. And of course, everyone always always ALWAYS brings their "A" game to Inter. Still, I feel confident about the game this Sunday. Although Inter's record against Torino is better at home than away (lost 15 league games at home, 30 in Turin), Inter has not lost a game to Torino since 1994. Right now, Inter is in great shape physically and mentally. The team knows we can win, Mourinho knows we can win, I KNOW we can win. I just wish I could be home to see it.