Inter is hosting Lecce, new to the Serie A this season. Without knowing much at Lecce, I'm expecting another Inter victory.

Luckily Johonna's recent Calcio Italia has review of the three new teams (Chievo & Bologna). The coach that lead the Gialorossi to promotion was Guiseppe Papadopulo. Despite his good work for Lecce last season, the board gave him the boot. Calcio Italia says he was replaced by Mario Beretta because "his only fault was to not be 'cool' enough for a new entry into the top flight." Sounds like the old coach just wasn't media friendly enough. 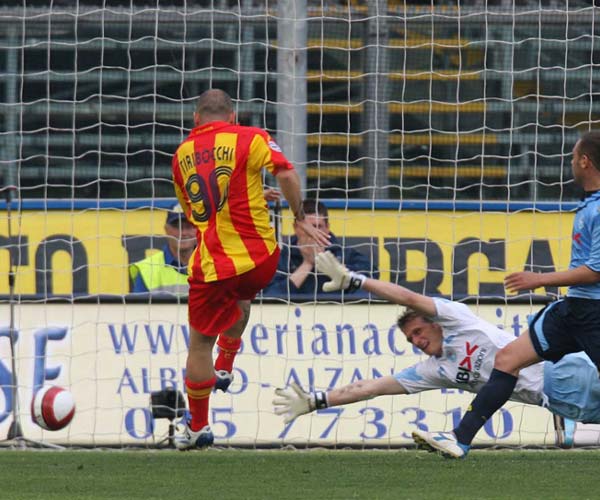 Lecce's star is striker Simone Tiribocchi. He had mixed results at his previous club, Chievo. He scored 19 goals last season. He had successful partnership with Elvis Abbruscato (now at Torino).

Lecce started the season with no losses until losing to Bologna 1-0 at the Stadio Dall'Ara. The team was hit with the tragic death of one of their coaching staff, Antonio De Giorgio was struck by lightning during a training session. Spooky.

By all accounts they are scrappy team and lucky to be in Serie A. Let's hope their just another wrung in the scudetto ladder.