Share All sharing options for: Inter Scrape Past Genoa in Coppa Italia 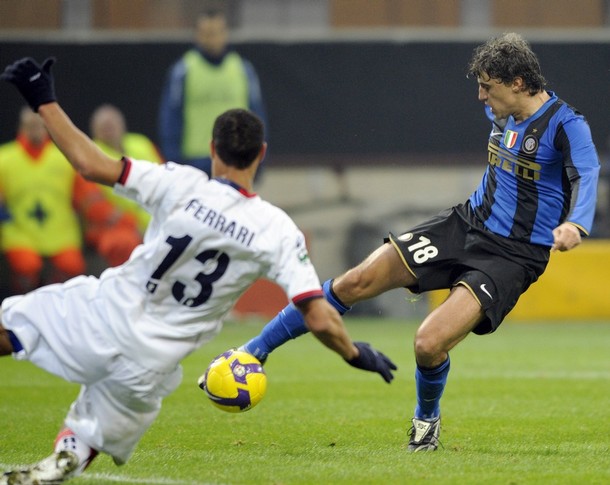 Yep, Inter managed to pull through in extra time for a 3-1 win over Genoa at the San Siro today (or last night depending where you are). It was a grind. No matter how hard Inter knocked, Genoa keeper Alessio Scarpi would not let a ball through. On the up side, Maradona was in the stands to scout for the Argentina National Team so all our Argies were on their best behavior. Even Crespo and Burdisso. Adriano managed to pull himself out of his funk with a nice header, while Cambiasso got his first of the season. Ibra rounded out the scoring with a audacious nutmeg through Scarpi's feet. Genoa played a hell of a game, and Marco Rossi's equalizer was simply beautiful. Still, when you are playing with 10 men, by the time 100 minutes rolls around, I bet you just plain get tired.

The line-up was not exactly what I expected, with Chivu finding himself in a central midfield role and Crespo (whoops) up front with Adriano:

At the half, Obinna came on for Muntari, then towards the end, Cambiasso took over for Jimenez and Ibra for Adriano. Jimenez was ok, especially given all the time out he has had, but boy, did Cambiasso make a difference. I still dont like Chivu in midfield. He was adequate, but not great.

I was able to find some highlights of the game - set to C'e Solo l'Inter for some reason (available in high quality at youtube):

As you can see, Crespo had some great shots on goal and a super work rate during the game. Of course, he did not score, but he was on target and on side so that is a huge improvement for him. Also, he gets extra marks for passion. I am sure that if I could lip-read Spanish after some of those miraculously saved shots, I think my eyes would be burning. Welcome back Crespo, I knew you were in there somewhere. Mourinho is also happy with him saying:

"Hernan was unlucky not to score, but was lucky to have a pleased coach."

Genoa went to 10 men early in the first half when when defender Giuseppe Biava was sent off for a last-man foul on Adriano (according to ESPN and Channel 4). True, Adriano had his feet taken out just outside (like a couple inches) the box, but when he came down from the tackle he was in the penalty area. The penalty was only given after consultation with the linesman. Adriano's penalty was stopped by the keeper so the ref's error came to nothing.

Muntari had a spectacularly horrible game. He was booked in 34th minute and was extremely lucky not to have picked up a second. According to La Gazzetta, Muntari should have been shown a second yellow for a foul on Vanden Borre. I admit, I was working during the game and only half watching for parts of it. I did not see the foul in question so I cannot speak to it. I will defer to La Gazzetta. I will say that I was glad to see Obinna come on in his place for the second half, though.

With this win, Inter book a spot in the quarterfinals and will take on Roma next. No one was injured, and a couple players got a chance to work some kinks out, so maybe this coppa thing is not so bad after all. True, we let a goal in and probably should have put the game away in a lot sooner, but you cant fault Inter for Genoa's great keeper and no one could have stopped Rossi's goal. In the end, I am happy. Chivu, Jimenez, Adriano, and Crespo all showed improvement in their game; Burdisso did not give me a single gray hair; and Zanetti had a beautiful strike (saved of course). Hopefully we will take this momentum with us to Bergamo on Sunday. 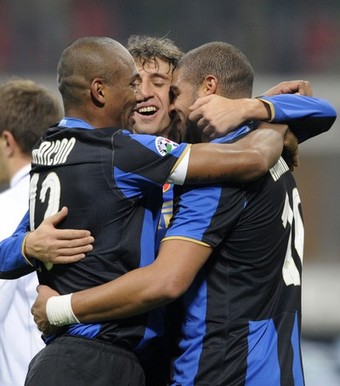