Share All sharing options for: Atalantian Punishment and Coppa Redemption 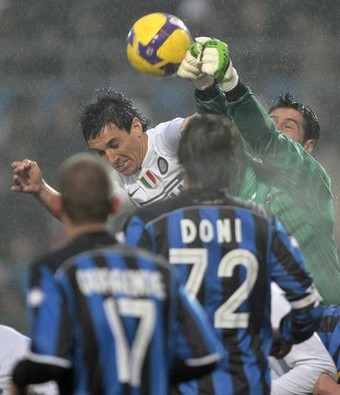 Alright, so we lost. No, not just lost, we were soundly spanked. Atalanta kicked our collective butts to the tune of 3-1. It happens and there is no use crying over it. Hopefully, the squad has learned something from the loss and will be much improved against Roma in the Coppa game tomorrow. I have yet to watch the whole game - I couldn't get past the first half and those 3 goals in 20 minutes. We did manage to pull one back I hear, but man, it was brutal. Worse yet, there goes our goal differential.

For those of you interested in horror films, here are the highlights.

Well, if you believe the players, Mourinho, and Moratti, just about everything.

For Julio Cesar, it was a sad day: "We made a slow start and we were below par. Del Neri's team played much better than us and we have to admit that they deserved the victory."

Cordoba's take on the game is much like my own. He said: "Atalanta played a lot better than us. They played off by heart and this caused problems for us. It was a terrible day and we have to learn from our mistakes so we don't repeat them, and look ahead... We play again on Wednesday and we'll have to play an excellent match against Roma to get back our game and morale."

Moratti flat out blamed Mourinho: “I don’t think it is possible to see a worse Inter than the one we saw yesterday. Mourinho makes the choices that he wants and we support him. He decided everything, even on the winter preparation..."

For his part, Mourinho agrees, it is all his fault: "..this result is our fault. I have broad shoulders and I prefer the criticism to fall on me rather than on my players... If we talk about today's match I confess that the coach is the face of his team, the only person responsible for the defeats. We played our worst match of the season. I'm the coach, I'm not touchy, and I'm open to any type of criticism."

So there you go, criticize away.

But that is the past, now we have another game to think about.

Mourinho has made his call-ups for the game:

Much as I thought, Quaresma, Mancini and Balotelli are on the list. I am sure that Balotelli will get some pitch time, but I am just not sure how to work Quaresma or Mancini in.

As for the line-up, Mou says:
"The group on the pitch will be the same as in the last matches, the one I consider the strongest possible, and Ibrahimovic, Zanetti, Muntari, Cambiasso and Maicon will definitely play."

Note that Cordoba and Maxwell are both off the list. I guess this means a start for Chivu in defense and Samuel will pair with Burdisso in the center. I still cant remember if Rivas is any good. In front, I think Adriano will start, but that Balotelli will play. Whether he plays well is a different story.

Ok, so to wrap up, Inter has looked into gaping maw of mediocrity and I hope it scared the pants off them. Sunday's game will have to be the "what not to do" for the rest of the season. Roma are a good team and will be difficult to beat. Not that we cant, but certainly they will be fighting tooth and nail. I will hope for a positive result, but I am much more focused on the league this season. The darkness that is Juventus is beginning to close in and the tiny prick of light our 3 points represent may not be enough to hold it back.

Still, even in the face of defeat

And congratulations to Ibra who won 3 Calcio Oscars: best player, best foreign player and best goal in 2008! He still needs to do something with his hair, though. 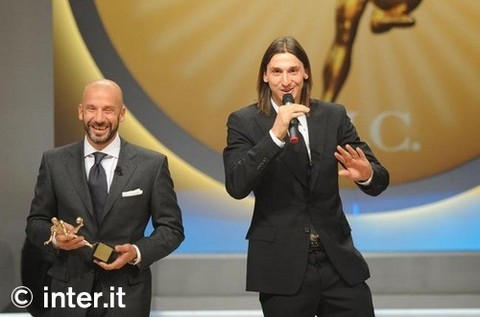