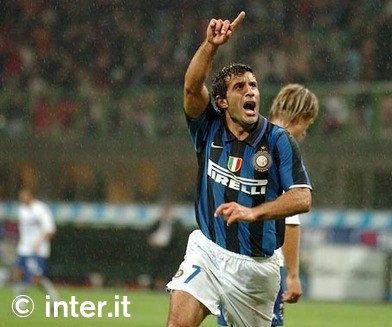 This game officially begins the second half of the season. Inter went to Genoa to play Sampdoria in the first game of the season, ending in a frustrating 1-1 draw. Last time Sampdoria came to Milan, Inter crushed them. Well, to be fair, Ibra crushed them, but Figo got one in too (see how happy he is in the picture). In any event, Inter put 3 past Samp's keeper and managed to keep a clean sheet. Without a doubt, a second result like this would make all Inter fans ecstatic. I think, though, we are all starting to see that last season has no bearing on this one. Really, I think it is best if we just forget about our past glories and concentrate on today. I think we have seen that if you dont keep a close eye on the game at hand, it can come around and bite you in the rear. As always, this game is a must-win if we wish to continue our fight for the scudetto.

Just for fun, here is what happened last September:

Unfortunately, the Samp page here on the Offside appear to be another casualty of real life (anyone want to blog?). Sampdoria have been in a bit of a slump lately. They had a small break last week when they knocked Udinese out of the Coppa Italia on penalties. In the league, though, they haven't won a game since mid December when they put two past Reggina. Sampdoria's poor form has seen them slip to 15th place.

Mazzarri has called up 19 players

As you can see, Cassano is not on the list. He has been ruled out due to "neck problems." We shouldn't celebrate yet, though, as it looks like Pazzini will be making his Sampdoria debut. I am sure he will want to prove his worth to Mazzarri and the fans. He may be dangerous.

Much more worrying for Sampdoria is their defense. Only three players are available so it is thought that Palombo will drop back and cover. Palombo does not seem worried, saying:

“The Coach knows that he can put me wherever he wants and I’ll do my best. I have played as a defender in other occasions, so there are no problems. Of course it will take me a little bit to get accustomed to marking an opponent again, but when Mazzarri explains tactics I hear it all.”

Hopefully he will provide some gaping holes for Adriano to waltz through. Really, I saw the game against Roma a couple weeks ago, and Sampdoria do not look all that good.

After suffering a bit of a setback last week, Inter are looking to at least maintain their tenuous grasp on first place. We are, of course, without Ibra for this game - he is suspended for accumulating too many yellow cards. In addition:

Technical reasons... What the heck does that mean? That they technically suck? Or that they are technically going to another team? Ok then, who does that leave?

Mourinho has called up basically the rest of the squad:

There has been some speculation that, in the absence of Ibra, Mou will revert to a 4-3-3 tomorrow. Mourinho is being cagey about his line-up, saying:

"The important thing is to play well as a team and do it well. If this happens, one or two strikers will play, or Adriano and another striker or two wingers. Attitude is the important thing, and like I have just said, playing like a team. We can win the match if we do this."

So, we will all just have to wait until tomorrow to see.

I am not watching the Juve Fiorentina game so I dont know if Juve have managed to close the gap. Really, it shouldn't matter. We need to play like we are 6 points behind instead of the doodie that passed for football last week. The Coppa game was better and Adriano showed that he still has it in him to lead an attack. Boy, if ever Quaresma and Crespo were to shine, though, this is the time. We really need a couple goals from them.

It looks like Cordoba and Maxi are back in the mix. Really, the fact that they did not play midweek may have been more about rotation than bad form. Still, the back line did concede 3 goals (yikes) last week (it still hurts every time I write it).

So, lets all hope that Crespo remembers how to actually get the ball in the net (please oh please) and that Samuel and Cordoba are back to their November form.

It is not over yet. Even if Juve win and we slip to second for the night - we are not dead yet. Lets try to keep a positive attitude, there is the whole second half of the season to go.

In the words of our suave Portugese leader: