Share All sharing options for: "Genoa are better than Inter" - Genoa 0 - Inter 5

Some may have forgotten the above statement, but I haven’t. And its statements like this that gets people into troubles. Not because I believe that there is a large a huge Karmic vortex that punishes hubris - although I could be wrong, it certainly seems like that often enough – but because it indicated sloppy thinking. Anyway, in the short term I am happy that the sentiment was proven false, but in the long term I think that this may say more about perception than reality - more on that later.

Anyhoo, in a game like this more than one person stands out. I have three Inter Players of the Game:

Highlights after the break: 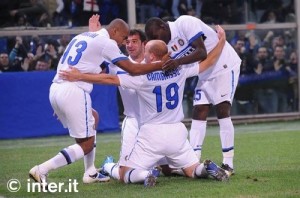 Bonus Stat: Inter playing away: 11 goals for 2 against.

There isn’t much that surprises in the game stats. I worry that the cautions are amassing. The Bonus Stat is a little weird. 9 of those away goals were scored against 2 opponents. The ultimate reason I will get to later, but the practical reason is that teams are opening up against us.

I am not breaking my own rule on hubris by saying that we have a good team; I am just stating a fact. One would think that coaches as savvy as those in Serie A would organize their squads appropriately. That is, be cautious; hit on the counter – like Bari. But, Milan and Genoa have decided to play us as though we were a bottom half of the table club. As I said earlier, I may not believe that there is a Karmic Vortex that punishes hubris, but it sure feels like it sometimes…

Maicon: I don’t know if it was Maicon or Mourinho that kept him back to protect against the Genoa trident, but he pulled off an effective smart, tactical game, if not offensively spectacular one. That being said, he scored. This is the reason he’s better than Alves. 7.5

Lucio: He defended, he pressured, he intercepted and he attacked. Lucio was the steal of the Mercato and he’s the reason I have no sympathy for cash strapped Italian clubs who have trouble defending. Plus, it took him no time to become accustomed to Serie A. 7.5

Samuel: When he looked like he was injured, we all almost panicked. Why? Because he’s a damn good defender and he’s consistent, just like he was on Saturday. 7.0

Chivu: Chivu played well, if not spectacularly so. He was solid. 6.5

Zanetti: It was his toe poke tackle between the legs of a Genoa player that sparked a glorious pass from Sneijder to Mario for the goal. Plus, I don’t think that I have ever seen him so vocal. Zanetti made sure that he made his points to the ref and other Genoa players. 7.0

Cambiasso: Cambiasso is a great player to have in conjunction with an AM like Sneijder. He can collect the ball and pass it up to the forwards or 3/4ista relieving them of any defensive duties as he runs for 2. I was worried when he came out that 3 might not be enough to win. Plus, he was the catalyst for the first goal. 7.5

Muntari: See, this is how Muntari is effective. He collects, he hounds, he pressures, he energizes and then he makes an easy pass to someone else to start the offensive work and taking the odd long range shot. 6.5 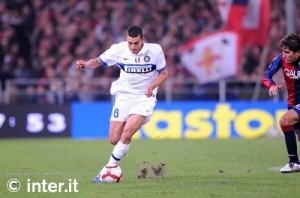 Sneijder: What a great fit for the team, even if he didn’t see it at first. Mourinho did, and it’s paying off in spades – even if it’s early in the season yet. I don’t think he took one shot at goal, but all the work he did for others was excellent. 8.5

Stankovic: Wonderful game. He attacked and he defended. He made that signature, diagonal, slashing runs that he was famous for half a decade ago. He really ran his heart out. 8.0

Balotelli: He was a decoy out wide, he came back to the defense to defend, and he took a beating from the Genoa defense that was clearly frightened of him. He was the lone striker and managed to score a beauty of a goal – the same shot that Stankovic missed earlier and the shot that Ibra would always miss in seasons past which frustrated the hell out of me. 8.0

Vieira: Came on at half time and was adequate. Even he couldn’t mess up a perfect pass from Sneijder. 6.5

Mancini: Came on for Sneijder. Was adequate but lost the ball just outside the area because he was trying to juke 3 guys. If this game taught us anything it’s that we don’t need to do that anymore. Pass the stupid thing. 6.0

Cordoba: This is no reflection on Cordoba, but I was cursing when he came on. We need Walter Samuel. Thankfully we have the depth that allows us to utilize Cordoba. N/A 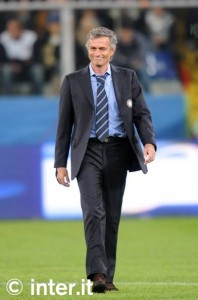 Mourinho: Who saw the 451 formation? That would be me. I called it on Friday, only I thought that it would be Quaresma instead of Deki due to international fatigue. I also said that I would be happy with a draw. I am happy I was wrong on those two accounts. But that shouldn’t dim the brilliant job that Mourinho did on Saturday. He motivated and prepared an injury depleted squad to go out and dominate a very good team.

The short and sweet analysis is that Genoa – the professionals who should have known better - believed the hype that the media was spewing.

Inter was in crisis again, this time it’s an injury crisis. Mario was going to have to be used and he has already been painted as a poor player, despite all the evidence to the contrary. Mourinho, if we remember our press clippings, is a rubbish manager anyway – all the out of work managers/Juventini say so at least – so he wasn’t going to be able to create anything, right? Ibra is gone, and the Italian Media had been telling people that he was the whole team for three years. People, forgetting that this was the Italian Media talking, believed them.

And besides, Genoa was the better team anyway. Their own president said it, so it must have been true. Check out the players, coaches and fans during the game. They believed that they were going to put a pasting on us, just like Milan did. The press certainly thought so, judging from the near obits they were writing this past week.

The resulting media whiplash from this game will make some of us believe that we have a better team than we do. I suggest that you have a good time with the positive stuff that the media will give us – it won’t last. We will lose a game, or win one by a single goal and they will be trying to tear us a new one soon enough.

Just try to remember that we have a good team, despite the punditry. 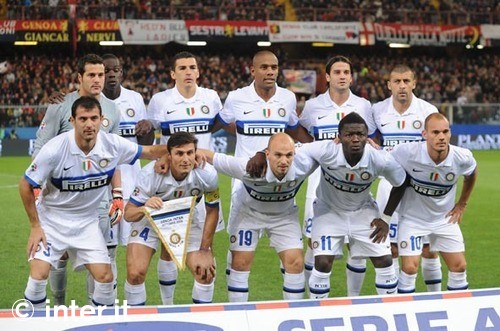