Let’s get this out of the way right now – when a defender takes out the back leg of the forward heading to goal, and doesn’t touch the ball, it’s a stone cold penalty. If Julio Cesar gets called for his "penalty" a week or so ago, than this is definitely one.

With that out of the way…

There is a reason that there is a song called Pazza Inter. 1-0 at the first thirty minutes. 4-0 at the next fifteen. 4-3 at the thirty after half time. 5-3 at the last. It was harder than it should have been, but only because we made it harder on ourselves. It’s not like this team doesn’t already beguile and tease enough on a regular day.

If nothing else, my arteries got a good workout.

It says something that the reason I thought that was because I don’t have a whole lot of faith in Cordoba anymore – Cordoba, a player that I always had a lot of respect for. I still think that he’s better than most of the #3 CBs out there, but that’s not really saying a whole lot.

Anyhoo, here’s my Inter Player of the Game. No real surprise is it? 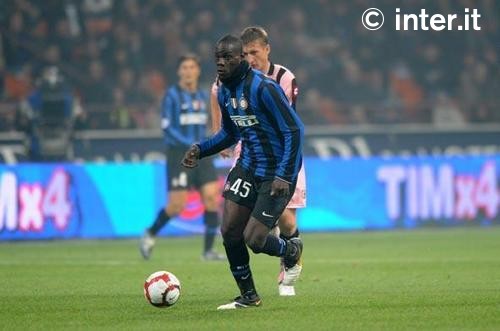 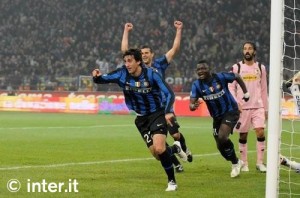 The game stats shouldn’t be a surprise to anyone who watched the game. Inter dominated the first half and could have been 5 or 6 goals up at half time. During the second half, Palermo went on a run and Inter tried to stem the bleeding after falling asleep.

Zanetti has now played in more games than anyone at Inter with the sole exception of Bergomi. If he manages to stay healthy and motivated, at his current rate, he can overtake Bergomi in 2 years.

Cesar: I thought that Cesar had a good game up to the second goal. By the time the third goal went in, I thought he should have had gotten one of those. I consider all the goals defensive breakdowns. 6.5

Maicon: This is the first game in a while that I thought Maicon was into the game and pressuring the other team. Nice, classy game. 8.0

Cordoba: This was a shocking game from someone who should know and show better. 5.0

Samuel: Samuel was the rock in the back line. He also kept the ball alive so that Cambiasso and Mario could put the ball in the net. 7.0

Chivu: I grow less and less enamored with Chivu as a fullback. Average. 6.5

Zanetti: He was the leader out there. He brings Mario back into the group. He’s selfless in his role with Maicon. Oh yeah, he played well too. 7.5

Cambiasso: I thought that Cambiasso was a step short and was just average. He needs to get his wind up. We need him. 6.5

Muntari: Muntari is definitely back from the funk of earlier this season. He tackles, he made smart passes, he ran up and down the left line. He did his job and he did it well. 7.0

Stankovic: Personally I didn't think that Dejan did a whole hell of a lot in this game other than take a shot or two. He made some passes, but he wasn't the factor here that he had been. 6.5 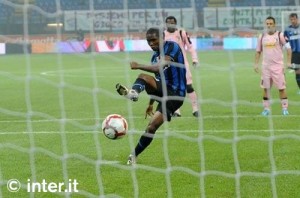 Eto’o: Sweet strike to score his second and he had 2 that threatened. He scares the defense so much when he’s out there it opens up for others. And he was on one foot. 7.5

Balotelli: Lately – even on the Offsides main page – Mario is being dragged through the mud. They say he’s a red card waiting to happen – he’s had 2 in his senior career. They say he throws a fit – he stood on the field disappointed. They say he’s selfish – he has more assists than goals. They say he’s a cancer – the team has never been closer. We know who’s saying these things, right? It’s a crime that he’s not on the Senior National Team – but then again, look at who’s the manager… He was the best attacking player on the field, and he only played a half because he was sick as a dog. 9.0

Santon: He didn’t do much, mostly because he wasn’t on the field a lot. He did pressure more than Chivu did. 6.5

Milito: Milito is good enough that even after a long layoff for injury he can step in and score. How about that team depth at forward!? 7.0

Motta: Like Santon he wasn’t on the field a lot. He did get a shot on goal and I don’t think he was a negative. 6.5 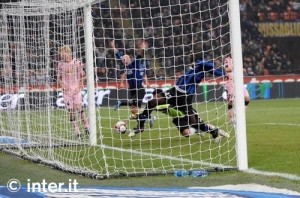 Does this game tell us anything new about our team? I think it does. It tells me that we have massive depth at forward this season with Mario, Milito and Eto’o, all of whom scored. And while it’s nice to have the pedigree up front, I think that it’s more important the direction that Mourinho is taking the team the short while he’s been here. For example, many are down on the transfers Mourinho made 2 seasons ago, but I agree with the theory behind them. Quaresma and Mancini didn’t work out, but the job that was set aside for them – pressuring the outside edges of the other team, using the width of the field – is a vital part of Inter this season.

I really see a difference in the team that Mourinho puts out and the team that Mancini and his predecessors used. It’s a very in your face, high pressure playing style that we just weren’t arrogant to try under Mancini. Mancini was much more cautious, in my opinion. The pressure that we are able to generate with new-ish contributors like Milito, Eto’o, Muntari, Motta, Santon and Mario is fantastic. Yes, I put Mario in that group even though he played some under Mancini. I think that Mario is much more at home in the current style than he was under Mancini. 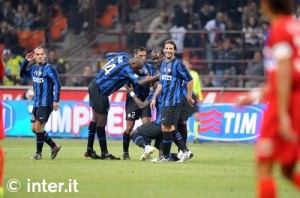 Does this mean more silverware? That’s too hard to predict – and really I don’t like doing it. What it could mean is more solvency, which might be more important. We brought down the transfer budget. We brought down salaries. We are restructuring renewal contracts. We restructure the Primavera and the senior squad facilities so that they are both supervised by the same guy. Lastly we put a product on the field that people will want to fill a new stadium to see.

Last year it was Mourinho’s plan to ease everyone into his idea for Inter. This season, we are transitioning into it. 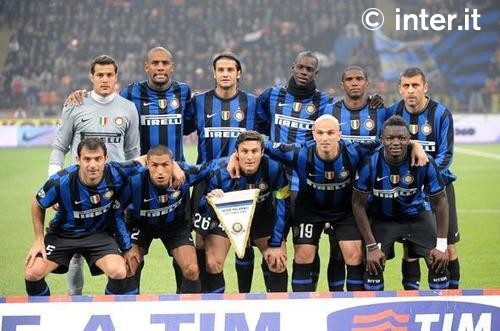