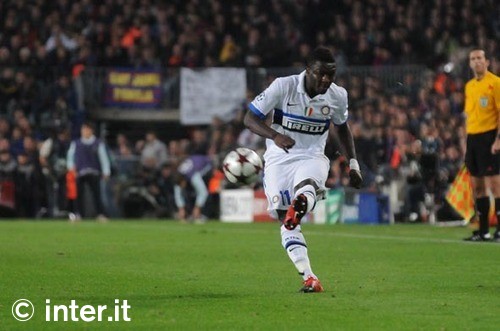 Right now I am the least plugged in individual regarding the game yesterday. I haven’t gone through the comments here and I haven’t read any of the post game stuff as this Thanksgiving stuff is really knocking me out. Frankly, I think that I am better off as most of THOSE PEOPLE really don’t have too much to say anyhow. I am willing to bet we lost this game because we don’t have too many Italians or something… sigh. But I wanted to make sure that there was something here for those who aren’t in the States for this crazy time known as "Black Friday Week".

So here are my thoughts on this delightful little sojourn. Feel free to disagree, although I probably won’t be around much to dispute anything with you. I admit that my next few statements won’t be anything that anyone wants to read. But I have to say, I think that they definitely fit the facts better than "It was an off day"… yikes.

If I was a fly on the wall in both dressing rooms, I probably would have heard two very different coaches’ speeches. In one, I would have heard something to the effect that a loss would have ended their Champion League season and let’s do this for the city. In the other I probably heard something to the effect that everybody already knew that the two Soviet teams drew – Sneijder, you sit – the rest of you, don’t get hurt, this game is meaningless.

And the resulting game is exactly what we got. One team played their little hearts out and the other didn’t run too hard.

The draw in the former Soviet Union meant that a win in Milan and Inter are in regardless of the result yesterday. Everyone knew it before the game started. With Fiorentina and Juventus coming up in key matches and the final Champions League Matchday more vital, Barcelona became a chore. We had to show up. We had to play it. But we aren’t going to risk anything or anyone. Sneijder was a no-go. Yeah, yeah, he was injured, but if it was important enough he would have gone. If he’s on the filed against Fiorentina then we know that Mourinho could’ve played Sneijder.

Does this mean that we played to lose? That losing was the plan?

Noooooo. It means that we didn’t risk anything or anyone. That, from what I can tell, we went into the game saying, “A draw is nice – if not, then no biggie.”

Cambiasso only played a half. This is an indicator that this game was snuffed at the start. Cambiasso is the ideal type of midfielder to have on the field when playing Barcelona. As is Muntari, by the by. Playing these guys a half each in this game means that we were saving them for someone else.

Stankovic started. If this game were crucial I don’t think he starts, and we waited an age to bring on Balotelli. In a more crucial situation if we go down by 2 in the first half – he gets in much sooner. 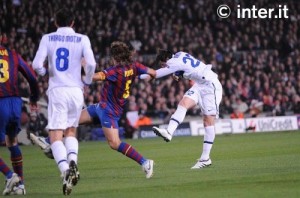 The biggest indicator that this game was a training session was the appearance of Ricardo Quaresma, The Ghost as I have heard him called. 2 goals down and we take out Milito is not the way to fight back into a point.

How about Mouorinho’s body language? There was a distinct lack of energy there especially regarding bad calls or the length of time Barca players were allowed to roll on the floor. He looked pretty disinterested to me.

Am I suggesting a Biscuit between the two teams? It’s not unheard of and I wouldn’t put it past either side, as it’s a deal in which both sides would benefit, but I don’t know that I, personally, buy it. Barcelona keeps the score down, gets a boost going into their derby and gets it’s much needed win; we rest and don’t run to hard and take on a Fiorentina that worked hard for its win – and more importantly have a better chance to keep the status quo in the run up to Juventus, who have a tough game this weekend.

Watch how many people will fail to read that last paragraph correctly.

But speculation aside, the result didn’t surprise me. I know others were looking forward to a back and forth game where both sides would attack and drama would ensue. But this is the Champions League, folks. “Safety” is the name of the game, not “football”. Safety tip number one, in MAD’s book: Make sure that you are in a position to win the Cup that you have a good shot at winning. That Cup isn’t given in the Champions League, that’s for sure. That Cup is a crap shoot after the group stages – and really, most teams are only in it make 10 or 20 or 30 million Euro anyway. The Big Ears Cup is pretty incidental.

The Serie A Championship is a better bet. And like I said, I haven’t read anything or listened to anything regarding interviews that confirm or deny what I have said. I am just speculating reasons that confirm what I have seen yesterday. I know that there are a lot of people upset about not getting a good game. The British commentators made sure that was clear (By the way, I love listening to British commentators talking about a game in which neither team was English or Scottish. It’s like watching a dog turning his head to figure out what you said). But if you thought that Inter were gong to come out with guns blazing, Serie A be damned… then you haven’t been paying attention. 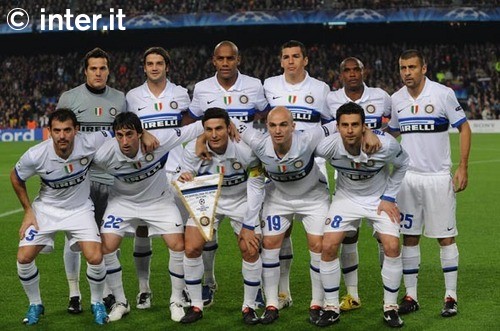