Share All sharing options for: Inter v Fiorentina: The Italian Kings of Europe Come to Town 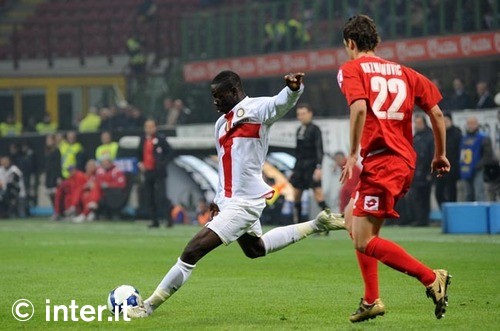 While the rest of us struggle in our respective groups, Fiorentina have swanned through and booked their place in the knock-out rounds of the Champions League. Good for them. Certianly, given our midweek performance, they will come to Milan in high-hopes of taking three points back to Florence. Funny thing is, they could be right. Barcelona was a swift kick to the crotch for the team and fans alike. Still, Inter have proven over the years that even though we suck in Europe, the boys still manage to bring it for Serie A. I just hope that since Inter lived up to reputation midweek, we continue to do so this weekend by keeping that Serie A steam-roller on track.

What: Internazionale v Fiorentina
Where: San Siro, Milan
When: Sunday, November 29, 3pm local time (6am pacific, 9am eastern)
How to Watch: Fox Soccer Channel is showing this live. Of course, you can always find a stream (MyP2P, Rojadirecta, Ustream, and ATDHE.net).

Inter actually have a pretty good record against la viola; Fiore haven't won this fixture since May 2000 (when they kicked the crap out of us 4-0). Of the 72 times Fiorentina have come to Milan, Inter has won 41 games and drawn an additional 18 (that leaves 13 games Fiore have won). Last year Inter won this tie 2-0 thanks to two set-piece goals from Ibrahimovic. It wasn't a great game (Santon almost killed Comotto), but the squad did what they needed to and the points were ours. The highlights:

Luckily, I dont have to do much of anything for this section as Tim already has his preview up. Check it out if you would like a purple-tinged take on the upcoming game.

Basically, Jovetic is back, Mutu is still out, as are Natali and Gamberini. Donadel is disqualified.

Fiorentina sit at 6th place on the table, with 21 points (11 less than Inter). They have allowed 12 goals and scored 15, although only 6 of those have been away from home. They are a good team with a good coach. Just thinking about them is making my stomach start to churn a bit. 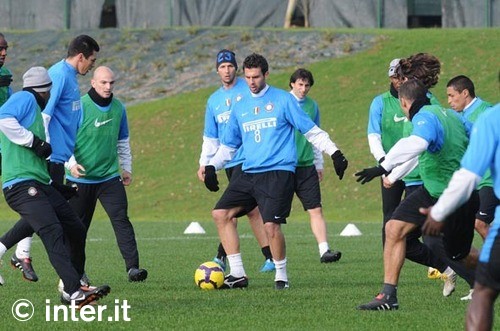 Come on, Boys, lets shake of those Spanish blues and get back to what we do best - winning in the Serie A.

Mourinho has called up everyone who is not injured. That means the whole first team except for Obi, Santon, Sneijder (all injured) and Belec (who is playing for the Primavera today). Everyone - even the disqualified Maicon, it seems.

Basically, between injury and the Juve game next week, Inter are between a rock and a hard place. Sneijder, as I said is injured - still. Maicon is suspended, and, as Santon is injured, that means Zanetti will have to play defense. So we are at -2 in the midfield already. Add to this that Muntari, Stankovic, and Thiago Motta are all one booking away from suspension and I think you all begin to see our problem: what the hell are we going to do in midfield? 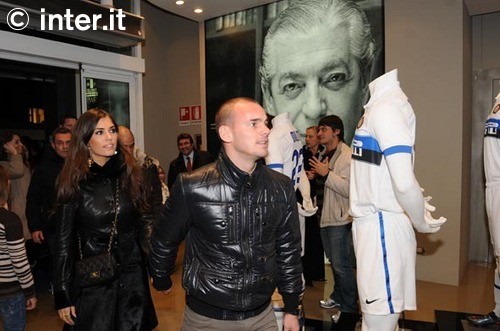 Sure, Sneijder is fit enough for gala store openings with his fiancee but as for actually putting a foot on the pitch, not so much. I hate international friendlies.

We cant risk Stankovic unless we know Sneijder will be ready next week. I wouldn't bet on it. Similarly, if Sneijder will be out for Juve, then we need Thiago Motta for that game, right? So we can't risk him either. Muntari, well, he is probably the most replaceable of the three, but he is also the most likely to pick up a card. Cripes - this is starting to feel like I am crossing wits with a Sicilian when death is on the line.

So what does that leave us with? Patrick Vieira (shudder). I just dont see how he does not feature in the game tomorrow. I am trying desperately not to sink into melodrama here. The only things that are keeping me from a black funk are the tryptophans coursing through my blood from all the leftover turkey and the fact that all of this will play out while I am fast asleep. Somehow, the fact that I wont be watching it live seems to resolve me of responsibility for the outcome. Whew. 'Cause I think this is going to be a grind.

Mourinho was terse and cagey in his press conference today. The journalists kept trying to draw him into talking about things he didn't want to like the Champions League and the controversy around Balotelli.

One thing that caught my attention, though, was his lukewarm endorsement of Samuel Eto'o. Mourinho was asked if he is happy to have Eto'o back to which he responded:

"I'm happy with the performance of my team, a team who is first in the championship where after 13 matches played they have won 10 and drawn 2 and is first with 5 points. In the Champions League we are second, if the group were to end today, we would already be qualified from a very, very difficult group, we still have a home game that will tell us whether we deserve to close the qualification. Who is the coach of a team that is first in the championship, which is second in the Champions League and that in 18 official games played in a large percentage of these matches with quality and has scored a lot, this coach must be in general satisfied with his team. Eto'o is a player of this team, I do not speak of individuals but the collective and as a coach, so in general I am satisfied with my team: because they have not lost any of the objectives they had set out for itself at the beginning of the season."

Not the most glowing of praise, then, for what was supposed to be our new super striker. Personally, I think he is largely done; whatever spark he may have had just seems to have gone out. He was wonderful for Barcelona but that was because he loves it there. Quite frankly, I just dont think his heart is in Milan. He agreed to come because really, what choice did he have? What other club was going to pay him 11 million euro? I think he is a perfectly nice and professional guy, but I just dont think he will ever be the player he was for Barca. When he played for them it was for passion; for us, it is a job. 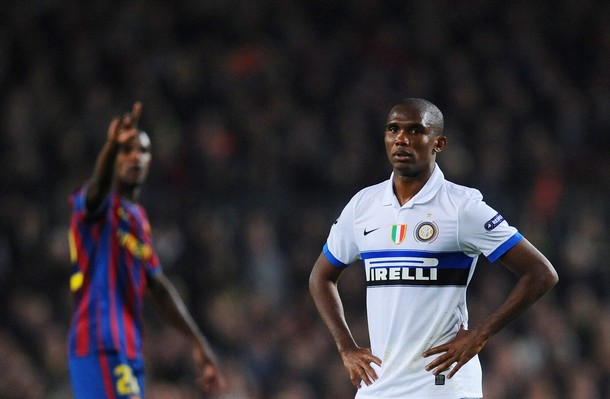 Probably wondering what terrible thing he did to warrant his banishment from Barca-eden.

I know, Ibra was similarly mercenary in his loyalties, but at least he still played for personal glory. Eto'o has won everything already and has nothing to prove. I am sure he would prefer to win, but I just dont see that killer instinct in him anymore. If our Champions League hopes are pinned to him, we might as well give up now. He just doesn't care enough anymore. But maybe I am judging him too harshly. Maybe it is just as he says and is still suffering from his foot injury. I am willing to give him a few more games, I suppose. Come Christmas, though, if he hasn't shaped up, I think I will revisit this topic.

Ok, so I think I should wrap up before I fall into a huge grumpy heap on the floor. I am intentionally not dealing with the whole issue of the racist chants towards Balotelli - I think my position on the subject is quite clear. Besides, I am sure there will be more to talk about on the subject in the coming week.

Lets just try to keep our heads together - one game at a time. Lets just focus on these three points first. We have the talent to beat Fiorentina - the lads just need to keep their wits about them and play like they own the place (which they do!). I know the whole blog has been gloom and doom - but that is because I tend towards melodrama. Despite our midfield woes and the absence of key players, I think we can totally take them. Totally.

Here is a little footage about this year's Inter store and all the great stuff none of us can buy: