Allow me to summarize my reaction to the first 84 minutes of this game: Here we go again.

I thought: another game in which we are the better team and not necessarily acting like it. Oh, we had most of the possession… even in the first half if that means anything. We had more corners, way more shots on target, and more shots in general, etc., etc. But we weren’t putting the ball in the net. Which is not the norm when we play in Serie A. We have a fantastic offence in Serie A. In Europe, we squander chances, it seems, even against the Anthoris Famagustas of the world. I can only hope that the team that shows up against Barca is the team that won the second half and the game in Kiev.

I also, before I get to the meat of this review, I wish to share an experience. I watched the Barca game and heard the commentators talk about our "group of death" about 3 times. After our game yesterday, I read about our "group of death" and our "group of champions" several times. Why do I bring this up? Well, I used these phrases two weeks ago and a frequent visitor to this board told me I was full of it and an apologist for my team. It's nice to be vindicated, again.

Okay, my Inter Man of the Match: 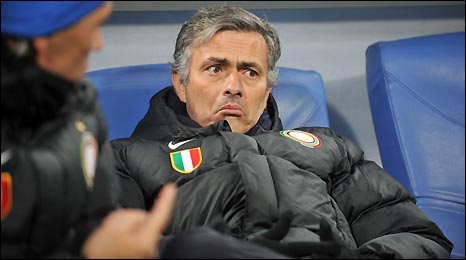 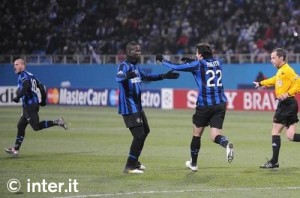 Yep that’s right. 19 shots on goal and 8 were on target. Meanwhile we only had 1 shot on target… and it went in. It was a perfect European game by our boys. Did someone mention “Bad Luck” in the comments during the games yesterday? I have no reason for mentioning it… nope no reason at all…

Cesar: He one shot against that required a save. One. It wasn’t even a hard shot. It did seem deflected, so I will give him that. Otherwise, yikes. 6.0 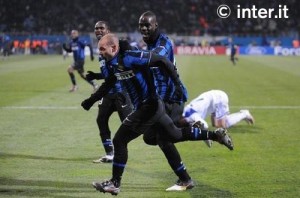 Maicon: He couldn’t maraud his way forward too much because he had a forward in front of him, but he wasn’t as solid as I thought he should be considering the situation. 6.5

Samuel: Once again, our best defensive player was Walter. He almost scored again, too. We made a great purchase when we bought him. 7.5

Lucio: He had the worst game of his short Inter career against this very team a couple of weeks ago. But he bounced back beautifully. He pushed forward and pressured like he was brought on to do. 7.5

Chivu: He had a decent outing, which is his norm nowadays. None of the back four looked too bad yesterday, since they didn’t have too much to do. 6.0

Zanetti: Solid, solid, solid. Maicon didn’t look like he was handling his area very well and Zanetti came in and shored up the right. Wasn’t his greatest passing night but he contributes in so many ways its hard not to overlook one bad aspect of his game. 6.5

Cambiasso: Cuchu has looked out of sorts in some games since his return from knee surgery. This was one of those games. He is at least as much at fault as Chivu for the goal. He was subbed at halftime correctly. 6.0

Stankovic: Deki has been so solid for us this season that’s its even more glaring when he’s having only a decent game. He took some shots and worked his ass off. I can’t really fault him for that. 6.5 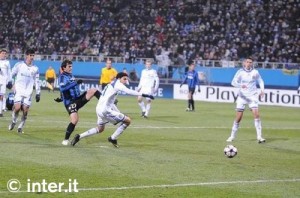 Sneijder: Here’s the thing. Kiev is a big powerful team. They play the power game at least as well as we do and it bugs us when we can’t run over people – which is why we had so much trouble with these guys. I think Sneijder was a little intimidated. He stays out of Schmujko-land because in the second half he took it to Kiev and he finished off a goal that noone would have thought any less off him if he didn’t put in that extra effort. PS. I think that the pass to Milito for the fisrt goal was a wayward shot. I don’t think that I care too much though. 8.0

Eto’o: I am really disappointed in how Eto’o played. He had 2 golden, and I mean golden, opportunities to finish off these bastards and he whiffed on both of them. No one ever said that he was a clinical striker, but c’mon. 6.0

Milito: He really came on in the second half. His goal was deflected which was lucky and his effort not only saved the ball from going out after Muntari put a rocket on net, but his excellent shot and subsequent defelection is what served up the goal for Sneijder. 7.5

Balotelli: Was brought in too provide a spark and perhaps a goal. That’s exactly what he delivered. He provided a spark and missed a 1v1 with the keeper, Ibra-style. 7.0 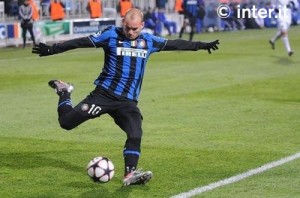 Motta: Handled midfield duties very well – he pushed up and fell back and was relatively effective. Definitely the right choice to bring in for Cambiasso who was struggling. 7.0

Muntari: He was the last gasp sub that Mourinho could possibly bring on. It was his blistering shot from distance – on net – that the Kiev keeper fumbled that allowed Milito and Sneijder to capitalize. He played a wonderful 15 minutes or so. 7.5

Mourinho: I don’t always grade Mourinho, because sometimes the game doesn’t need to be determined by a sub or a change in formation. This game, needed both. And what a job he did. Quick what does Milito, Muntari and Sneijder all have in common? Remember those people that kept coming onto this board and jeering at Mourinho’s mercati? Funny, huh? 9.0 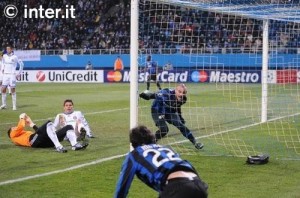 It goes without saying that if we were playing against a Serie A team, I would have been more upset. My ambivalence towards the contemporary so-called Champions League has been well documented. I have been told that I don’t like it because Inter can’t win it… which is funny since Inter has won it twice. So that’s obviously not why I just don’t care about it. The format really bugs me. The format used to be called the UEFA Cup in days gone by – a format which Inter has won 3 times. But with this format it’s not really a Champions League. It’s The First Two, Three or Four Domestic League Table Spots League, really.

For those who don’t know, the current format and rebranding is an effort for UEFA to keep the top teams in England, Spain, Germany, France and Italy from forming a European Super League whose TV deals would bypasses UEFA’s accountants – like the Premier League’s in England bypass the FA. Which is why it’s so inclusive – to keep enough teams happy so that they will keep the UEFA leadership in place.

It’s also why I don’t consider it too prestigious. It’s panem to keep the mobs (in this case the teams) happy enough accept leadership. So as long as they are dishing out huge plates of money I am happy for my team to do well enough to maintain a further financial advantage over the majority of Serie A.

That being said, I want my Beloved to do well. I just wish that we didn’t have to wait until the second half of all these games before we decide to lock it down and press. If we could ramp up to gear faster, I think that would be ideal. Of course, if we could have had our major contributing players not just getting back from injury… that would be ideal too. 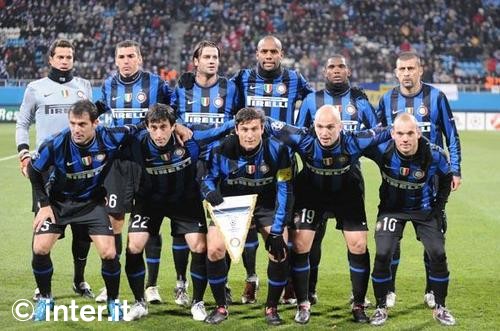