The Derby on the European Stage - Gregor's First Derby

Share All sharing options for: The Derby on the European Stage - Gregor's First Derby 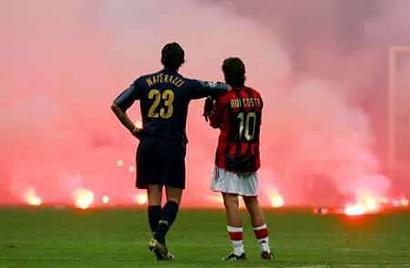 While we await Sunday's derby, let us turn our attention to the other, non-Serie A meetings between Inter and AC Milan. Over the years, Inter and Milan have met approximately 100 times outside of the championship (I say approximately because the last tally I could find outside wikipedia was from 2007). Of these, four were meetings in the Champions League. There is no easy way to say this, but... Inter did not win a single one of those matches. We managed to draw two of them, but the other two, both in 2005, were losses. Our last UCL tie, April 4, was the infamous game in which Dida was struck by a flare thrown from the Curva Nord. In the end, the game had to be abandoned and Milan went on to the finals against Liverpool (Milan lost the final on penalties). I in no way condone fan violence, but the incident did produce one of my favorite Derby images (see above). Despite being on opposite sides, Materazzi and Rui Costa watch the madness as friends, or at least as colleagues; opposing combatants united in the face of real violence. The image reminds me that while it is fun to be a fan, you should never be a fanatic.

On that note, we have one more Derby remembrance. Gregor has offered his experience with those two April games: 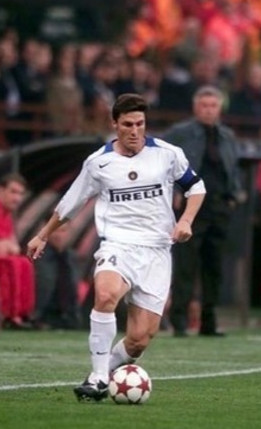 The 2004-05 Champion's League quarterfinal match-up between Inter and Milan was the game that made me the die-hard Inter fan that I am today. Before this game I had never followed any teams and I had hardly ever watched any games. I had been a player for a few years so I had a passion for the sport but so far I had not found any teams to commit myself to. In that season however my cousin, a total AC Milan fan, had started to get me into watching a few Serie A games. I remember seeing parts of a few Inter games and one player that I was really impressed with was their right back Zanetti. Now, back then I had no idea about the history that Zanetti had with the team but I was very interested in the team that had their right back as captain. I was looking for a role model that played in the right wing-back position (the position I still play today) and I believed I had found one in Zanetti.

At this time I was only beginning to develop a fondness for Inter but my attraction was mostly directed towards watching Il Capitano play. I was glad to see Inter advancing in the CL rounds but I had no idea what it meant when Inter drew AC Milan for the quarterfinal. My cousin however certainly had an idea of what it meant and invited me to watch the games. I guess she expected me to cheer for her team but when I began to applaud Inter she realized I was becoming a fan of the enemy! Soon the intense emotions of the Derby erupted inside our room and we had ourselves one exciting game! Even though Inter lost it only strengthened my appreciation of the team. Seeing the cocky AC Milan players boasting over their win got me angry and I wanted my role model Il Capitano to come back and lead our team to a total victory in the second-leg! Oh, and I had already developed a hatred of Shevchenko!

For the second-leg match I had ordered a Zanetti jersey and was very excited to see Inter win against Milan. Well, win they did not but what a game that was! I can't remember ever being so fired up during a match before or since that one. The emotions I had during that intense match-up had built the strong foundation I now have for my love of Internazionale. I remember being so distraught and upset after the results of the decision to disallow Cambiasso's goal and the infamous performance by the Interistas following the call. 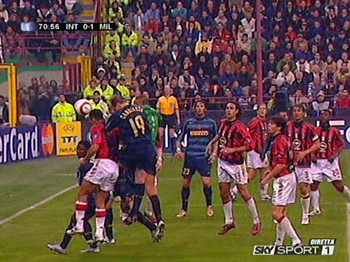 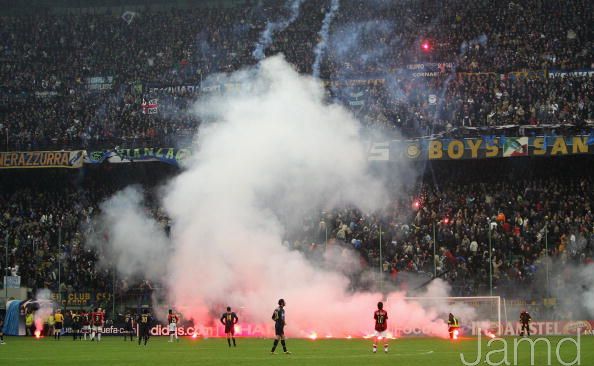 The infamous performance by the Interistas

After that momentous match I began to follow Inter with heated interest and developed a great hatred for our cross-town rivals AC. Every derby since then has awakened some of the fiery emotions I experienced during the 04-05 quarterfinal Derby. Since that 2004-05 season I was so pleased to see Inter perform magnificently well under Mancini. I became a fan during the revival of a great team and I'm hoping that we ride this surge of victories for years to come! This coming Derby has gotten me filled with all of the old emotions I had during that first Derby I witnessed. Hopefully we can continue our dominance and show AC that they have no chance of catching up with us this season! Oh, and it is always such a delight to brag about a victory to my cousin!!
FORZA INTER!!!!

So, once again we see that even in defeat Inter finds new fans. As for the Sunday, it is neigh upon us. I dont know about you all, but I am starting to feel the pressure. I suspect that I will get through tomorrow on nervous energy alone - at least the obligatory Valentines Day dinner out will distract me for the evening. In any event, I will get a preview up tomorrow and we can hash out formations and whether or not Maicon will play.

I want to thank all of you for your contributions to the blog - this has been a whole lot of fun for me. I hope the readers enjoyed it also. Maybe we can do it again some time. Please feel free to email me with comments or complaints, tips or suggestions at johonnars [at] gmail [dot] com.