Share All sharing options for: Inter 0 - 0 Man United - It So Could Have Been Worse 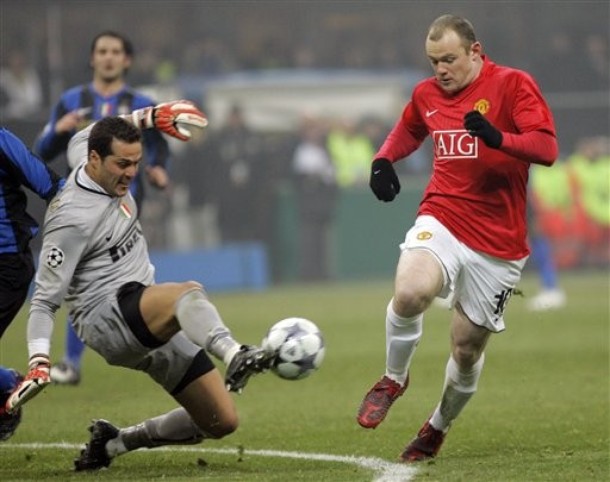 Ok, so we didn't win... But then, we didn't lose either. Plus, thanks in large part to the wonderful man above (Julio Cesar), we did not concede one of those terrible terrible away goals. Really, I think Ibra summed up the whole game pretty well:

"We have a one hundred percent chance of qualifying. We go to Manchester with two results out of three in our favour. We didn't manage to take the lead but we stopped them from scoring, and this certainly isn't a disadvantage. It was a wonderful match tonight. The first half was theirs but the second was ours. Manchester are a great team but so are we. We matched them blow for blow tonight, now we will go to Manchester to win."

He may be overstating Inter's game a little, but that is to be expected. I think you will all agree that is so could have been worse.

I would put a video here, but UEFA does not want anyone to enjoy 3 minutes of a game unless they pay for it first. Besides, there is really not all that much that I want to see again.

First, there was the first half. It was horrible. Inter looked nervous and gave up way too many free kicks. Plus... well, plus everything. If there was a "what not to do" for football, it would show that first 45 minutes with big red arrows over half the Inter squad. And what the hell Rivas was doing out there is anyone's guess. And Muntari.... Just what was he thinking? [I can feel my blood pressure rise just thinking about it] 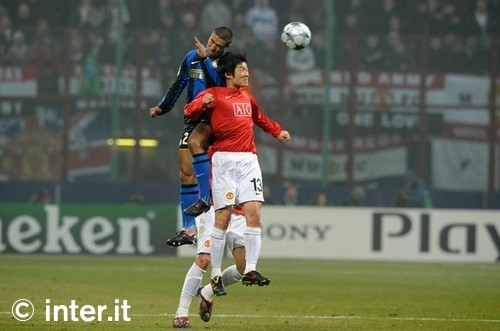 Cordoba came on for Rivas in the second half and things went a lot better. Still not good, but better. If only Adriano.... well.... was actually there yesterday. We had some shots - none of them on target though. I would be more upset, but as I said, I am not going to get emotionally involved with this competition.

Cambiasso played a good game, and, with some loveliness by Zanetti, they were able to stop Rivas making too big a fool of himself. There was a bit of a fracus from the bench when Toldo and Figo came out to protest against the referee not calling a nasty foul on Muntari - he got a crunching kick to the googlies, and while I probably should say something about O'Shea getting all ball, it really looked painful so I wont joke. In any event, the ref saw nothing wrong with the crotch-tackle so on play went and Toldo got a card. [on a side note, Toldo has done something with his hair and is looking good!]

Towards the end, Mourinho went for a much more attacking formation, taking off Adriano and Muntari in favor of Balotelli and Cruz. Balotelli at least tried. Cruz was almost nonexistent. We really need a striker (or two) this summer.

On the upside, we have met the monster and it wasn't nearly as frightening as we thought it would be. Sure, Cristiano Ronaldo has tricky feet and takes a wicked free kick, but we have an 18-year-old left back (isn't he just cute as a bug?). They have Wayne Rooney, but we have Julio Cesar (see above). They have Berbatov, but we have a 36-year old right back come midfielder (with thighs of steel!). Now, if we could just get our strikers to actually shoot on target, we may have a shot. Granted, that is a big IF. 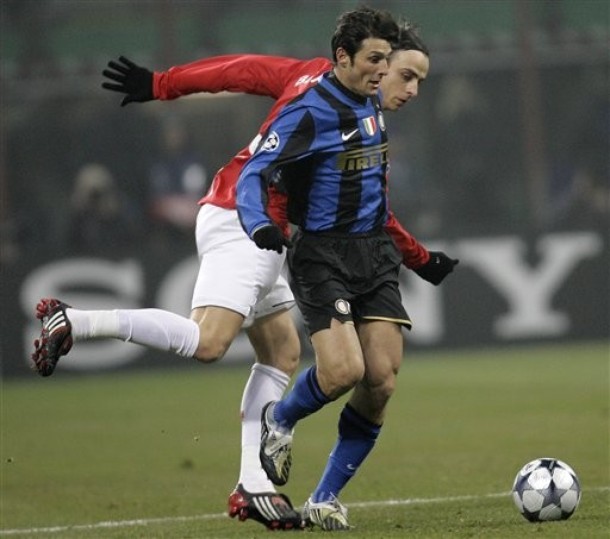 Zanetti The Wonder Man shuts down Dimitar "off sides" Berbatov

There is no use crying over the spilled milk of failing to score. In a couple of weeks we will know whether we will go through or not. All I can say is: at least we did not lose. No matter what Juventus and Roma supporters say, I think it is better not to lose, even if you are the away team. Of course, winning would have been better.

This weekend we have Roma while Milan is going to Sampdoria (meh) and Juventus entertain a sagging Napoli. In their current forms, I dont see either team taking points from Milan or Juve. It will be up to Inter to keep the pace - these are three points we cannot afford to throw away. While I am ambivalent about the Champions League, I want the Scudetto this season. I want it badly. So, instead of wondering what might have been, lets concentrate on the task at hand: putting those wolves down for the fourth time (and I thought only cats had 9 lives!).

Javier Zanetti has still got it. Thighs of STEEL, baby!