Heading Down to Lupiae - The Other Giallorossi

Share All sharing options for: Heading Down to Lupiae - The Other Giallorossi 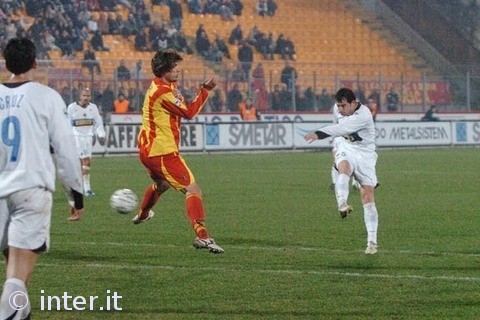 What: Lecce v Inter
When: Saturday, Feb 7, 6pm local time (9am pacific, noon eastern)
Where: Stadio Via del Mare, Lecce
How to Watch: Fox Soccer Channel is broadcasting it 4 and a half hours late (1:30pm pacific; 4:30pm eastern). If you want to watch it live, find a stream ( Justin.tv, Rojadirecta, Ustream, and ATDHE.net).

After being held at home by one relegation contender, Inter are off to visit another. Lets hope this time things go a bit better. Inter have a history of beating the snot out of Lecce, especially in the 1990s. A little perusal through the archives shows a 6-0 in 1999, 5-0 in 1998 (Ronaldo hat trick), 1-5 in 1997... it just goes on and on. I am not looking for anything so spectacular this time, but three points would definitely be nice. When they came to Milan, it took a late goal by Cruz to finally send them off. This time, I would like a more decisive victory.

For Inter's last game in Lecce, we have to go way back to 2006 (notice the kit in the photo). That game ended 0-2, with goals from Figo and Stankovic.

I found this super awesome highlight reel - it is even available in HQ!

Talk about continuity: although this game was played three years ago, with the exception of Veron and Favalli, Inter could field this squad on Saturday. Well, that and Adriano is suspended, but at least he is still at the club.

Yet another dead blog. Really people, there must be someone!

Ok, what do I know about Lecce...
-- the area was first settled by Greek colonists (although the name Lupiae is a later, Roman name)
-- there are lots of Rococo buildings in the city 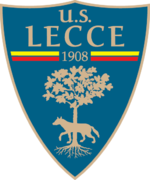 As for the football team... um.... They have a great team crest and horribly ugly kits. Is it just me or do they look like they should all be working at an Orange Julius? Bleck.

Beretta has called up 20 players:

Midfielder Giacomazzi is disqualified, while Munari and Vives are injured.

As I recall, Papa Waigo can be dangerous. In addition, Tiribocchi has 98 goals and is looking for 100. He is going to want those goals like no one's business. The team is riding high after their win over Siena last week. Hopefully, this means the squad will play forward instead of 9 in defense like they did when they came to the San Siro.

Cruz is still a little sick so did not get the call. Balotelli has finally gotten the call - hopefully he will actually get on the plane this time. Apparently, he is finally doing what Mou wants, or so he says:

"Objectively there are three ways a player can work with me: not do what I want him to do, do something because I ask him to do it, or do it without me asking him to. Mario is at the second stage right now, he's doing what I want because I ask him to do it. It will be perfect if he can get to stage three, he will be the player you all say he can be. But at this moment I'm happy he's past the first stage."

Doesn't this sound like something you would yell at your kids when they forget to do their chores? If he plays, I just hope he doesn't suck. The rumors are, though, that Mancini will start ahead of both Crespo and Balotelli. Really, none of the options put my mind at ease. Why oh why did we not pick up a striker... Oh well. We will just have to make due.

For Marco, this will be a homecoming. He was born in Lecce and his father played midfield for the team.

I dont think I need to stress how important it is that we win this game. No more slip-ups, no more stupidly dropped points, we need three points. We must assume that both Juve and Milan will win. I dont think I need to reiterate the unspeakable horror that will result from either of those teams winning another scudetto (shudder). We must fight for all that is right and good by taking full points at Lecce. Milan and Juve are up to Reggina and Catania this week - we can only worry about our own match.

What do you say we go late-Twentieth Century on their ass and beat them like it is 1999? I would make a prediction, but those scare me. Lets just win - I dont even care by how much.

How cute is this? Good thing he didn't leave, what would Chivu do without him? 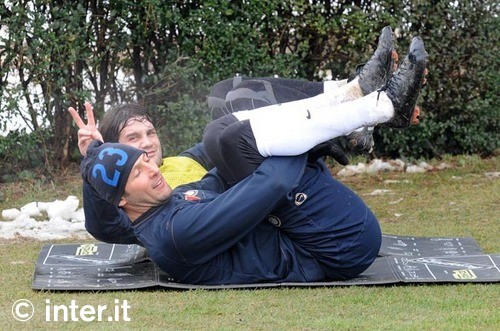