Inter 2-0 Fiorentina: At Least We Still Have The League

Share All sharing options for: Inter 2-0 Fiorentina: At Least We Still Have The League 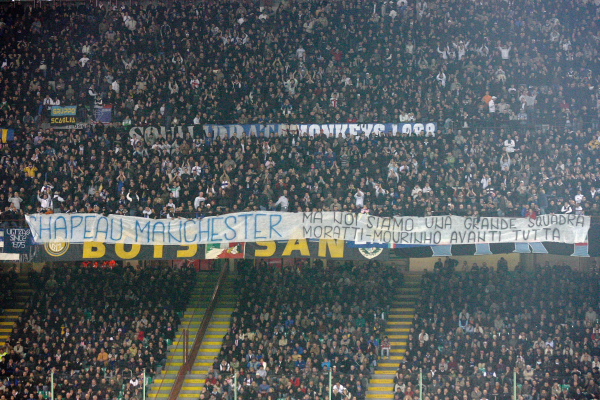 "Chapeau Manchester (?). But we have a great team. Moratti-Mourinho forward all." Despite rumors to the contrary, at least part of the Curva still supports Mourinho.

Alright. So we got knocked out of the Champions League. Sure, it sucks, but what are you going to do about it? All I can say is "Better Luck Next Year." For now, I am quite happy with winning our 17th Scudetto. I missed the CL game, but although we lost, it didn't sound like we played so badly. I am sure that everyone is disappointed, but I still say that we simply do not have the bench to make a real run at Europe. We need more than one striker that can score. We need another Stankovic (maybe even an upgrade) and another Cambiasso. The same 15 guys cannot play every league game, every TIM cup, and Champions League game and expect to win all three competitions. Something has to give. In this case, I think we would be extraordinarily lucky to continue in the TIM Cup and we have already been ousted from the CL. We better freakin' win the Scudetto!

But this is supposed to be about the Fiorentina game. The first thing I thought when I watched this game was that we look tired. The second thing is that the pitch is TERRIBLE. Here are the highlights, see for yourself: 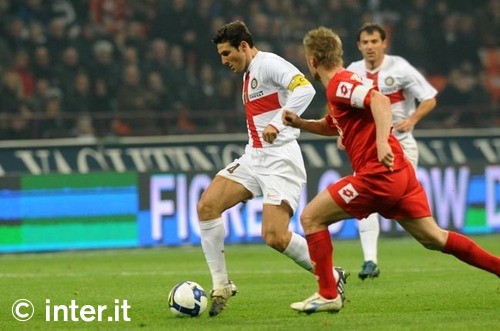 First off, lets recognize our captain for his amazing achievement. This game was his 634th appearance for Inter, matching Giancinto Facchetti's record. Javier Zanetti has been a rock for the squad - leading from the front. I can think of no other player I would rather have as captain of Inter. He is stalwart and tireless with great hair and amazing thighs. Plus, he has a heart. He and his wife, the lovely Paula Zanetti, run the PUPI Foundation which helps underprivileged children in Argentina. In the words of Mary Poppins, he is practically perfect in every way. When he hangs up his boots in 2011, it will be a sad day for Inter fans and Italian Football. But we still have two more years with Javier so lets not give in to maudlin eulogizing (like some bloggers who shall remain nameless). He still has a lot to give to both club and country.

Standing next to him in midfield on Sunday was Esteban Cambiasso. Another workhorse for Inter and all around good guy - he was making his 200th appearance for the team. Even when everyone else on the pitch is having a terrible day, you can usually count on Cuchu to give his all.

But back to Fiorentina, again.

As I said above, the pitch was terrible. I think it was the deciding factor of this game. There was a whole lot of sliding about which I think was partly responsible for the huge card haul for Inter. We picked up a whopping FIVE yellows, including one for Julio Cesar who was cautioned for protesting which is terribly out of character. Santon was lucky to escape with only a yellow for his dangerous tackle/collision with Comotto. It was his first Serie A card, so maybe the ref cut him a little slack. Samuel was another who saw yellow - he will miss next week's match against Reggina. Balotelli and Muntari round out the list - and really, if there is a list of players who have been carded, they are the first two one would expect to see on it. Balotelli, because he is just too impetuous; Muntari, well, because he is Muntari, I guess. To be fair, though, Muntari's "foul" was never a yellow. 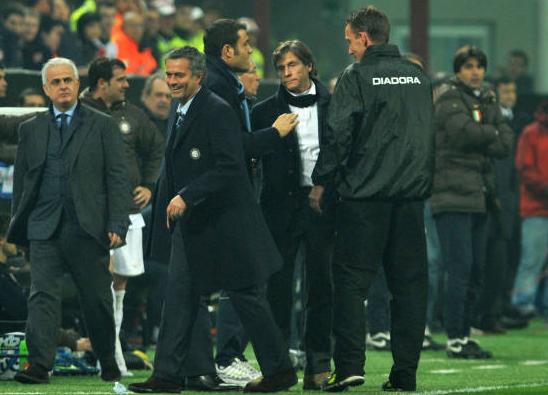 Mou sees red, figuratively and literally - I wonder what he said.

On their side, Felipe Melo was also lucky not to be sent off. He was the only to see yellow for Fiorentina, which apparently raised Mourinho's ire. Mou had a bit of a go with the ref in injury time and was sent off for his troubles. The Curva Nord didn't seem to mind, though, as they sung him off. Mourinho watched the last 2 minutes of the game from the special door in his bench area - technically, he was off the pitch.

UPDATE: Mourinho has not been disqualified for the Reggina game. Instead, he has been "formally reprimanded" and fined 10,000 euro. Fiorentina, on the other hand, have been fined 12,000 euro for the racist slogans some of the away fans chanted at Balotelli (rumored to be "you eat bananas"). I dont care how much you dislike Mario as a player, that is just unacceptable. I expected better from Fiorentina fans (dont ask me why, but I did). 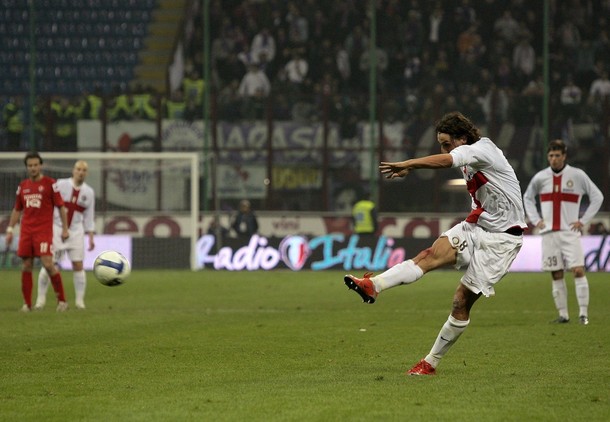 The game itself was a bit of a snoozer. Inter was tired and I can't help think that moral was a bit low - Ibra in particular appeared a tad dejected. Even so, he pulled it out for two set-piece goals. This brings his league tally up to 17 and makes him the second highest scorer after Di Vaio. 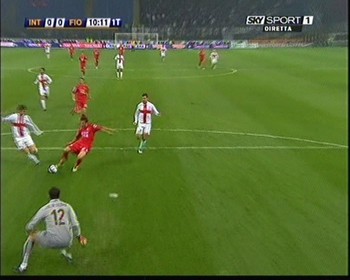 Julio Cesar goes one-on-one with Mutu and shuts him down. I love Julio Cesar.

We had a couple good strikes - Stankovic and even Santon were getting into the action, but in the end, we could only score on set pieces. Not that I mind, a goal is a goal, but we did not look all that creative in attack. Fiorentina, on the other hand, had at least 3 one-on-one situations in front of goal. Two were expertly blocked by Julio Cesar (double his pay - he can never leave us), and the other was horribly flubbed by Mutu (it just wasn't his day).

Figo came in at the half for an inured Chivu (please oh please let it not be serious). Figo was ok... Or, as the S.O. put it: "He is not playing poorly, he is just Figo-y." or something to that effect. Personally, I think that Figo played the best game he can given his age and the horrible, terrible, dangerous pitch conditions. It is clear that this will be his last year. If we win the Scudetto, at least he can go out on a high note (the CL would have been higher, but we are moving on with our lives).

More worrying than Figo's form is the fact that if Chivu is actually injured, the only central defender we will have available for the Reggina game will be.... NELSON RIVAS (cue the whinnying horses and the clap of thunder). He didn't horribly suck during the 10 minutes he had against Fiorentina, but with him you just never know. We have a week to sort things out so lets hope things improve.

Ok, so lets look at where we stand: there are 10 games left in the season (Reggina, Udinese, Palermo, Juventus, Napoli, Lazio, Chievo, Siena, Cagliari, and Atalanta). Thirty points may be a bit too much to ask for, but I think that 24 is totally do-able. We may just have to write the Coppa Italia off. Sad but true - I just dont think we will overturn a 3-goal deficit. Well, not unless we find that early-season joy and go 4-nil on them. It could happen, I suppose. Right now, the league is ours to loose and I will be sorely disappointed if we dont finish first come May.

Of course, now more than ever Juve will be gunning for us. I dont think they have any intention of settling quietly for a Coppa Italia and second place. Next weekend could be crucial for us. A win against Reggina (which is by no means a certainty) and a win for Roma (hey! it could happen), could be just what we need. And hey, Napoli may finally find whatever it needs to get back on track (although I think Dida still has some game in him).

So lets all buck up and get serious about this Scudetto. It is so close I can almost taste it!

Er, it looks like ESPN is having a bit of a glitch. According to their table, Crystal Palace is well on their way towards winning their first Serie A Scudetto! Wont they be surprised! 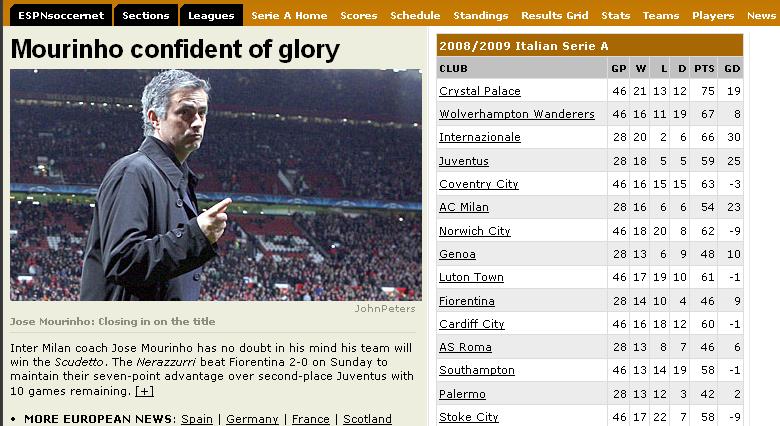