Share All sharing options for: A Few Loose Ends 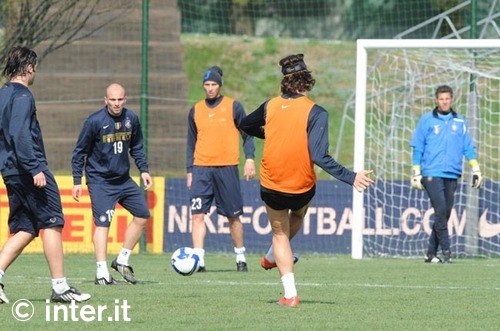 The international break is almost over and I thought I would tie up a few loose ends before we get back in the swing of things. Dont forget, this Sunday, we are back to work against Udinese (yikes!). It has been a busy week for our international players - even Mourinho has been out traveling. Oh, and Marco, Chivu, Figo, and Coroba are back in full training. We may get through this season yet!

First of all, as I am sure most of you know, Maicon was seriously injured during the Brazil - Ecuador game. It is not clear how long he will be out, but he is not even coming back to Italy for 10 days. There is some speculation that he will be out for the rest of the season. With only two months left, they may be right.

This is so not good.

Of course, that doesn't stop other clubs from wanting him. Antonio Caliendo, Maicon's agent said: "Yes, there is an interest from Real Madrid, but they are not the only ones because Maicon is the number one in his position." Good think he is under contract until 2013! 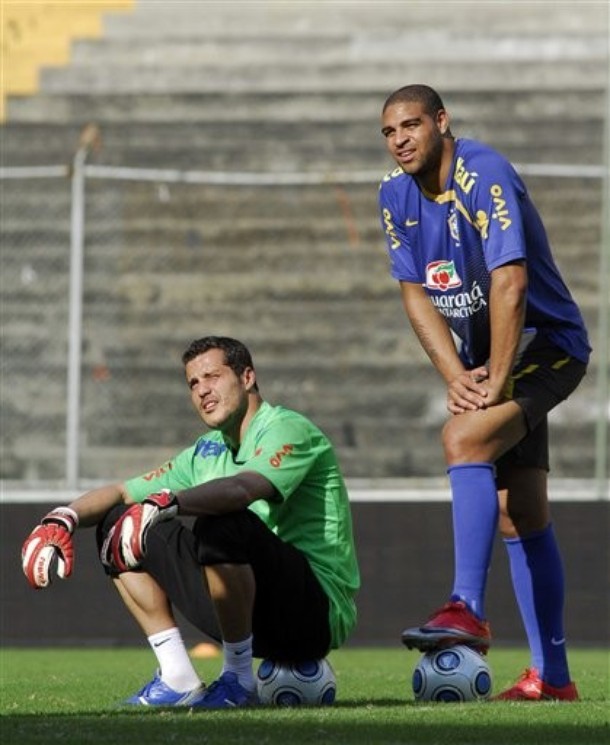 Dunga better not break these two!

Our other Brazilians seem to be doing well. Adriano did not play in the game against Ecuador as he had picked a knock to his ankle in training (I wish I could find where I read that - you will all have to take my word for it). He seems to be training again so may feature in the Peru game. Lets just hope he comes home unscathed. Julio Cesar, as always, has been stunning. I think the world has finally found out about him. What ever we pay him, we really should double it. 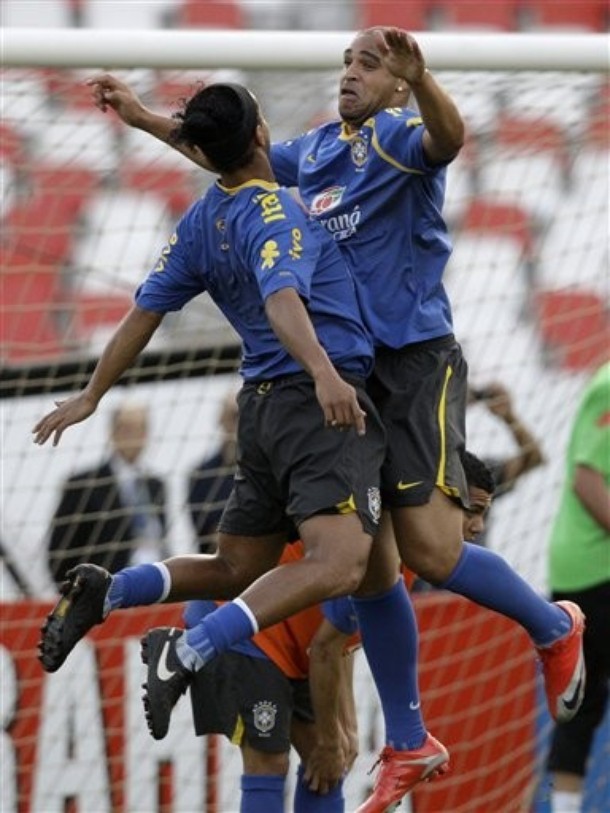 Somehow, I dont think Ronaldinho is a very good influence on Adriano.

On a down note, Adriano has found his way back to the tabloids. The Spoiler, quoting the Brazilian paper Extra, says that upon returning to Brazil, he had a blow out, all night long party at his villa. Robinho and Ronaldinho were there... along with a bevy of WAG wannabes and a famous transvestite model. Grrreeeaaaat. 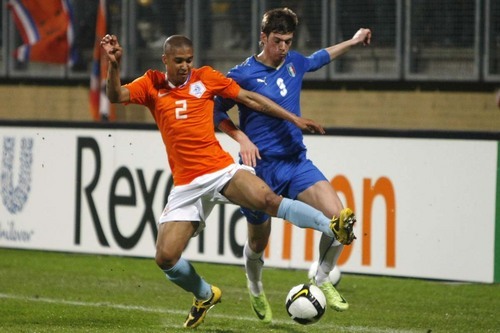 I hope all the hype doesn't go to his head.

Balotelli and Santon got the call-up for the Italy U21 team. Everyone (read: the press) seems to be impressed with Santon. He played on the right tonight (his "natural" position) so maybe he can help pick up the slack with Maicon out (didn't his Primavera coach say that they used to call him the white Maicon?). Balotelli picked up a knock to the head - I think he got cut - and had to be subbed out in the second half. This international break has not been good for us.

There is not much word from Argentina. They beat the snot out of Venzuela, 4-0. Zanetti played a full 90 for that game. Bolivia is next but no word on the squad yet. I know it is a great honor to play for your country and all, but after the whole Maicon thing, I can't help but hope both Zanetti and Samuel sit this one out.

In other news, Moratti was at a Milan-based Inter club where much of the membership is comprised of police officers. He said:

"The police offers do a very valuable job in our city. They are a very respectable institution and they are respected by everyone, by me first of all. And the fact that they are Interisti makes me like them even more. (Smiles) I drive without committing any offenses... and I'm very pleased to be here among very kind, polite and nice people."

Which is super funny (and ironic) given that Maxwell has been fined 6000 euro for driving without a license. It turns out that his Brazilian drivers license is not valid in Italy. Even worse, it was a Chrysler that he got ticketed in. I wonder if Brazilian licenses are valid in Spain...

On the coaching front, Mourinho has been in the US making sure the training facilities are up to snuff for this summer's tour and giving interviews to ESPN:

He is in favor of FIFA's proposed 6+5 rule and claims to want a more Italian Inter. I think it is admirable to bring youth players into the team, but I think it is also true when he says that rebuilding this way may mean a year without trophies (or "reducing winning potential"). The question then arises: is it worth it? Is building a more Italian club (whatever that means - we have players in our youth system from all over the world) worth losing for a season or two?

I will leave you all with that question to ponder over - oh, and a few Julio Cesar photos.

Contemplating his toes in the pool: 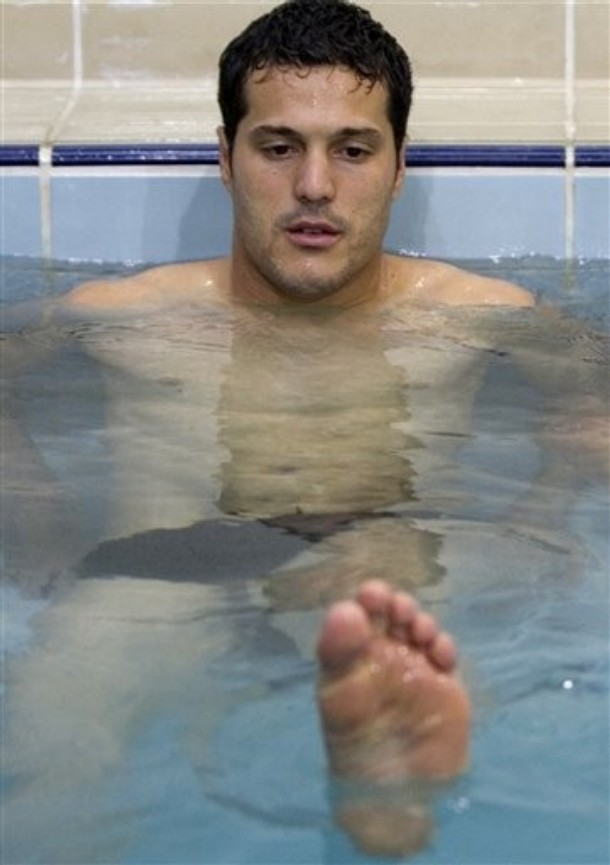 And cavorting with the enemy: 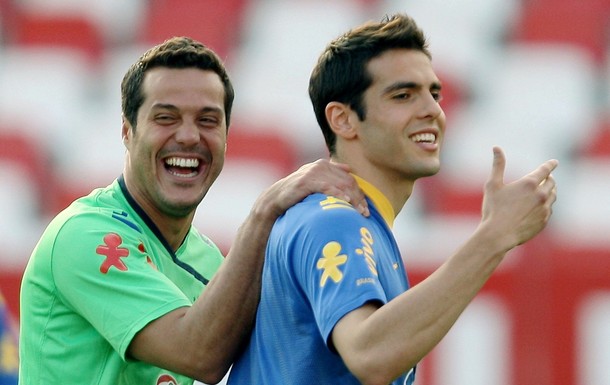