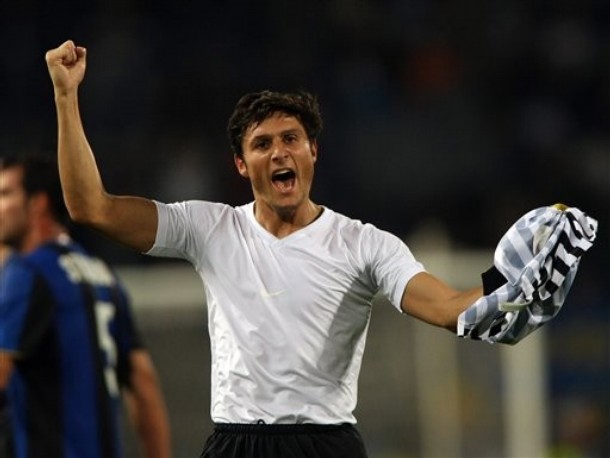 Boy howdy, but that was ugly. But hey, we get three points to bring us nine clear, and that makes everything just peachy. Oh, and grazie, Isla, for the goal. Basically, Inter sat back while Udinese tried to show us up. We had a couple of near misses - but really, we were mostly slow and out of sorts. Dont get me wrong, we did not entirely suck, but we were not anywhere near the level we can play (and better play at next week). In the end, we got the result, and, at this stage of the championship, that is all that counts.

Here are the highlights:

Well, first and foremost, Javier Zanetti. Yep, he comes home on Thursday (or was it Friday?), after playing a full 90 in Bolivia on Wednesday (we wont talk about that horror), then plays a great game for Inter - fresh as a daisy. What did he have to say about it?

"I came from a very long trip back but I didn't feel the tiredness of the match. I think I did well."

Really, the man is unbelievable. 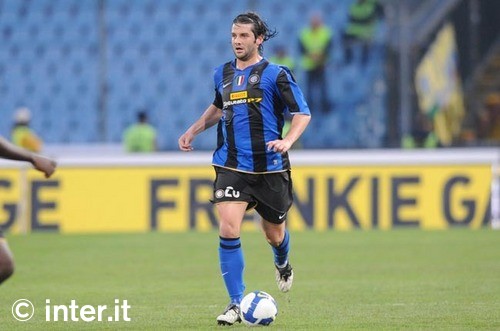 The question is, can he play 8 games without an injury?

Chivu made his triumphant return to the pitch and managed to win Sky's man of the match. Certianly he and Cordoba went a long way to keep Floro Flores and Quagliarella off the score sheet. Now, if he can just stay healthy for a while. 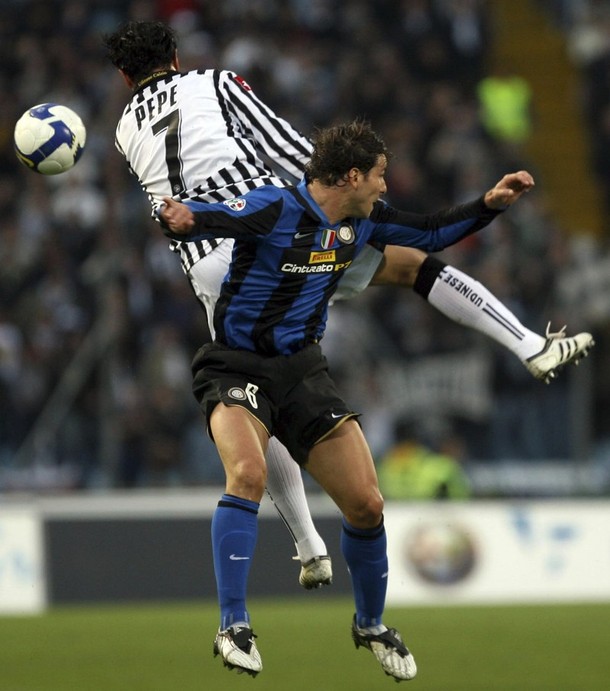 Maxi, back on the pitch... But for how long?

Maxwell found his way back to the first team and he wasn't terrible. In fact, he had a couple decisive saves and everything. Mou seemed happy with his performance, saying:

"Maxwell had a fantastic match tonight. He played with tranquility, the ball at his foot is always perfect for a player in movement. He had a great game. His future? He has a contract with Inter, he's 27, he's a fantastic lad, he's an example for everyone."

And then there is Julio Cesar. Without a doubt, Inter would not be nine-points up were it not for his wonderful magnificence. He also played both internationals last week, and although he conceded with Brazil, his sheet is still white as snow with Inter. The fans agree with me, and have given him the highest rating in the squad: over 8. 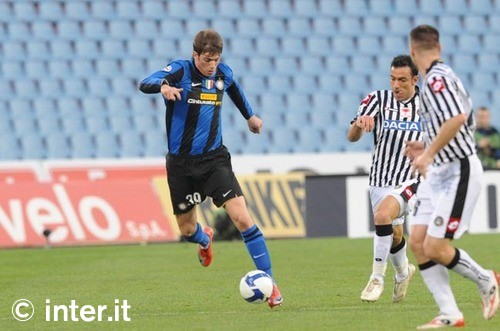 Santon may have been a little stinky but he is still cute as a bug's ear.

Ok, so Santon did not have his best game. In fact, he had a bit of a stinker. Balotelli also was not at his best. I think even the FSC announcer commented that he looked lazy during the first half. Mou commented on their performance saying:

"I didn't like Mario's game and I have already told him. I think he finds it easier playing with three strikers. He improved in the second half and gave a great ball to Stankovic, but he has to do better. I like working with the youngsters because they always need the feedback of a coach.

Santon also found it a harder match today. Perhaps he was tired after playing for the Under-21 national team, but maybe he's already used to playing on the left because he has played lots of games there and they are two different ways of playing football." 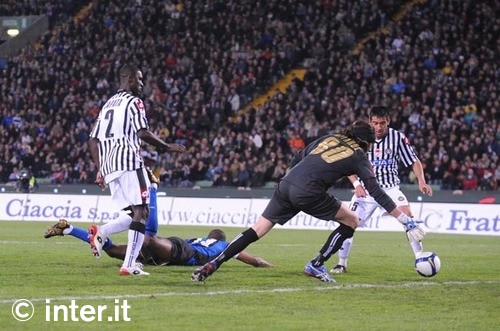 Grazie, Calcio Gods - I will most definitely light a candle tonight.

Vieira saw about 20 minutes. He came onto the pitch and picked up a yellow card on his first touch. Yikes. He got a little better as the game wore on, and was involved in the own-goal - sort of. Well, I suppose it was his run that caused all the havoc and Isla's mistake. Still, I think he needs to retire.

Oh, and the worst thing: Julio Cesar picked up some sort of muscle strain and asked to be subbed off. No word on the severity, or even the nature of the problem. It didn't look terrible, but, then I am trying not to think about it. Maicon was a huge blow, but JC, that would be catastrophic. We will not think about that - only happy thoughts. I SAID HAPPY THOUGHTS!

So, pretty much everyone else had a pretty average showing. They did their jobs, but the moments of brilliance were far and few between. People seemed to have a problem with Figo, but I though he actually had a few really great passes. Ibra agreed, saying:

"I touched more balls in the last 20 minutes than in the first 70, thanks also to Vieira and Luis Figo who created a lot." 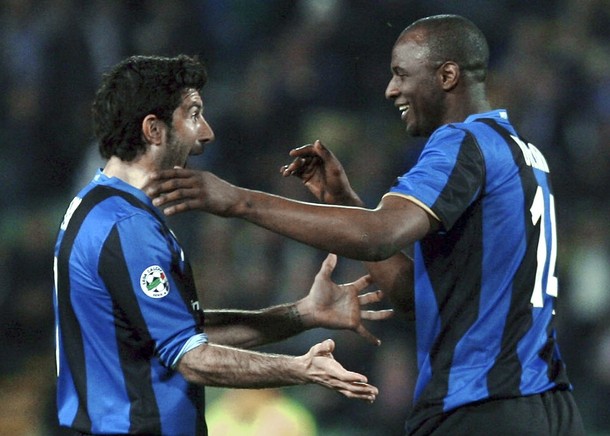 Figo may be old, but he still has a spark, vision, and tricky tricky feet.

Mostly, the squad seemed to be out of practice. There is a certain momentum to be gained by playing with the same 15 or so people every week. Our sense of positioning seemed to be off, and, for long stretches of time, we could not keep possession to save our lives. Hopefully the kinks will be ironed out ahead of next week's match against Palermo.

Around here, we just call him Adriano.

To recap, Adriano did not come back from Brazil as planned. No one seemed to know where he was - there was even speculation that he could be in some sort of trouble. We were even feeling sorry for him - worried even. But now, well, I am just pissed.

It turns out he is in Rio with his family. He wants to stay to watch the Flamengo-Fluminense derby so will not come back until after Easter. Yep. He just decided, all on his own, that he would take a little vacation. You know, if this were you or I, and not some prima donna football player, I think we would get fired.

The new rumors are that he stayed in Brazil because he is depressed over breaking up with is girlfriend. Are you kidding me?!? What is he, 15 years old? He can't even call work to say he isn't coming in? Cripes. I mean, I get it, break-ups are traumatic, especially when you are slightly manic. But that is no excuse not to check in with work. For the millions of euro Inter pays him a season, the very least he could do is answer the phone when work calls.

And then, to say that he is thinking about not renewing his contract with Inter? No. No way. He is not breaking up with us... We are breaking up with him. Right now, right here - in writing! You are all witnesses.

Well, at least he is really going to have to jump through hoops to make this right - huge, flaming hoops of doom. This is way beyond flowers and champagne...

For those of you that like to speculate about transfers, Mou has offered up a shopping list:

"What do we need to improve our game next year? It doesn't need a revolution, we must improve in all sectors. A defender, two midfielders, and and a striker with economic balance and of choice." 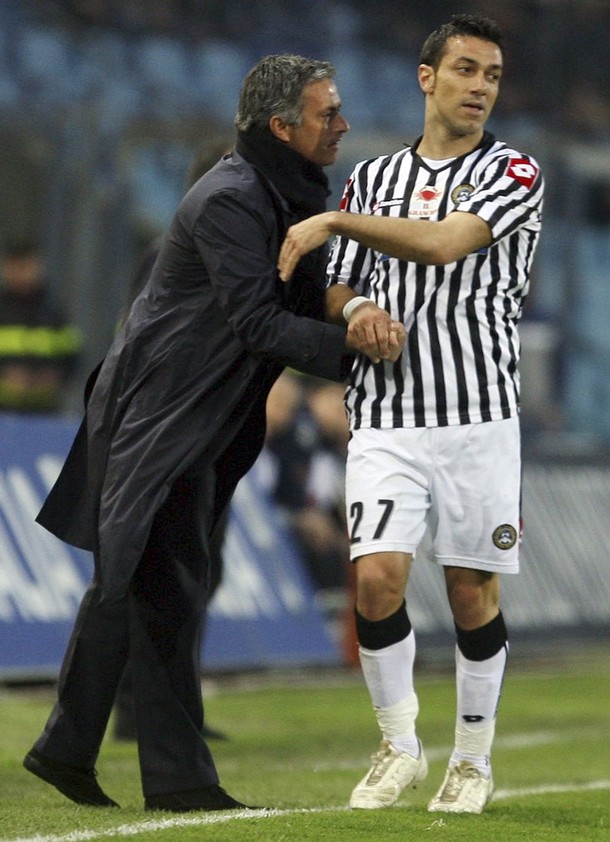 Hey there Fabio, how would you like to get a new set of stripes?

Then, he got the pundits twittering by with this little gem about Quagliarella:

"I told him that a dive was enough to get sent off and he told me he didn't dive, but he's a good lad and he's in our dressing room now. I'd like him to stay with our shirt, I like him a lot (smiles)... Cordoba and Chivu did a great job on him."

So there you go - speculate away!

To wrap up, we are 9 points up, but it isn't over yet. We still need 16 points to put this scudetto away - and we only have 8 games to do it. Basically, we have to win 5 more games. I say we start next week with Palermo.

No fun picture today - just the link for the Italian Red Cross (if you dont read Italian, here are instructions in English. If you are in the US, choose “Stati Uniti” under Nazione)

If you can, please donate. Every little bit helps.