What if… A Tale of the Silly Season

Share All sharing options for: What if… A Tale of the Silly Season 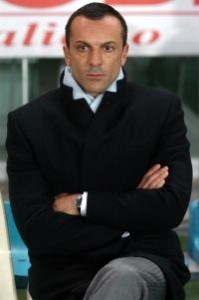 Okay, thinking outside the box a minute, I am trying to understand some rumors I read lately. Basically they boil down to Inter officials going to Spain and talking to the Big Two clubs there – Real Madrid and Barcelona. The only thing that either of the parties involved is saying is that there are no new developments.

Keeping in mind that Inter travel to the U.S. in early July, they really need to get this mess taken care of now. Mourinho strikes me as the type who wants all his players in camp and ready to go with no interruptions regarding comings and goings. So, all deals need to be made in the here and now.

Common - and popular - sense is that Inter want to keep the players in question, Maicon and Ibra. But if this were the case, why would our guys go to Spain to actually have discussions? So, assuming that the grain of truth in this report is that there are Inter officials in Spain, what deal are they trying to broker?

What if... Inter want to broker a deal selling Ibra and Maicon:

Let’s assume for the moment that Inter want some of that crazy money that’s getting thrown around. Inter might be thinking that the core of a very good team is already in place and that at least 2 superstars can be bought for the money that Real or Barca or Chelsea have been reportedly throwing around.

Here’s the possible team if the Genoa deal happens, without players we expect to leave and without Maicon and Ibra with no replacements/reinforcements:

That could be the squad assuming Figo, Cruz, Crespo, Mancini, Vieira, Rivas, Jimenez and Bolzoni are transferred out. Without goalkeepers, this is a 21 player roster. And for the record, I don't see Obinna or Suazo with us next year, but there has been zero talk about their leaving, so I included them.

Analysis: We would weather the loss of Maicon better than we would Ibra. The back 4 would still be very good – if slower, without Maicon. The starting midfield is also very good. The starting pair up front is very decent – but Balotelli has yet to play a full season all the way through. The depth in the midfield and attack is awful.

What if... Inter are in Spain to acquire a player:

I have admitted to not being a La Liga buff. Frankly, I don’t watch it at all, not even the BarcaTV stuff that comes on FSC. I think that if Inter are in Spain to acquire players – and I really think that they aren’t getting out of that country without at least one Dutchman – these are the ones that I think would make the trip as these are the players who would be, as far as I can tell, displaced after Real picked up Kaka and PooPoo.

The only players that Inter would be interested in from Barcalona would be the now famously named Yaya Toure (I see that first name getting a lot of bandwidth on this here blog) and Eto’o. I can’t see Yaya giving up first team on Barca anytime soon. And apparently Eto’o doesn’t want to give Barca the satisfaction of getting a fee from his sale. This is the reason, I think, no one is really bidding for him.

Personally, I would be sad to see Maicon go, although his recent attitude is helping me get over him really quickly. He was my MVP of the season 2007-2008 and I thought that he took an even bigger step up in confidence and attitude this season. He was without question 1 of the 2 best players overall on the team and when he was injured, we missed him a ton.

Ibra, I knew was always going to leave sooner or later, just a year after he got here. He was already talking about leaving and moving on. Plus his attitude was not team oriented – which is fine, not everyone is built that way and I don’t think that it’s good for a team to have too many unselfish players. Just like I know that Mario will one day go – maybe not after his current contract lets up but maybe soon after he renews - and I’m fine with it. It’s football.

Other Transfer “Not Necessarily the News”…

To my great, but still temporary, relief Inter appear to be closer to Carvalho than Deco, thanks in part to Chelsea’s apparent interest in Bruno Alves. Inter have, in my opinion, come to their senses regarding Deco. He's too old, he's too slow, he's too uninterested and he's too much like Figo - who did the right thing by retiring from the team (Sorry Deco fans, I just don't think he's right for this team right now). Unsubstantiated rumor has it that Chelsea are looking to receive ~10 million Euros and Inter are looking to pay ~ 5. No word yet on whether or not the two parties have heard of the number 7.5.

According to Maxwell’s agent, called Raiola, (read as: unsubstantiated rumor) said that there is some movement on the Maxwell renewal. Maxwell (28), despite his and his agent’s actions, has another year left on his contract. If there is a renewal, I hope that it’s a small one. Maxwell will be 28 when the season starts and although I thought he was a decent match for Maicon in 2007-2008 I thought the 2008-2009 version didn't look so hot. Does this mean I am ready to say goodbye to Maxwell? No, because not only can he play left back, but he can help out in the midfield and dare I say it, he can emergency fill in for the left wing - should we use one.

In a related note, there is a rumor that if Maicon leaves or if things take a nasty left turn in the Maxwell renewal – or even if these things don’t happen, there is a new name on the horizon for the Inter defense: Aleksandar Kolarov, fullback for Lazio last season. The 6 foot 1.5 inch 23 year old left fullback, according to his wiki page, has a strong attacking element to his game. Many scouts are “said” to be interested and Inter supposedly has a very good relationship with Lazio (Kolarov is a little cropped here, but he's shown with another name begging us to take him in, Ledesma. After looking at the depth of the midfield if we run a 442, I say sign his ass).

Chelsea, according to the most unreliable British tabloid around (and that is saying something) The Sun, are looking to do their best Real Madrid impersonation and lure Maicon to London. The rumor is that they will try to: 1. add Drogba to lower the cost – which we know Inter won’t accept, 2. bid 30 million Euros - which we know Inter won’t accept, or 3. bid the 40 million that Inter have declared he is worth. Only time will tell on which option they will go with, I suppose…

On the Arnautovic front there is a rumor that Branca will go this Friday to wrap up that deal. The player has agreed to come to Inter and has signed a “pre” contract. The agreement with Twente is stalled on compensation. Inter want a loan until January and then if the player heals/impresses, they want to buy at a prearranged price set this summer. Twente want cash, I think it’s around 10 million, plus a youth player – either on loan or for purchase - in return. I don't see how this deal doesn't go through - even though it'll be half a year until we see if he can do anything.

Jimenez, as Johonna has predicted, is a new West Ham player. The rumor is that it’s a loan with a right of purchase for the English team. I thought we could have used him, but it just doesn't look like it's going to work out.

Viviano is rumored to be loaned out again. I still hope that he will secure the 3rd goalkeeper spot with the team, but the team might be having second thoughts after Brescia’s performance against Livorno.

The Genoa deal, with all its components is slated to be finalized and reported to the public in the first week of July. Apparently not even the players or agents involved are really sure what’s all going to happen, yet.

This isn’t transfer news, but there is a lot of talk about Balotelli joining the Azzurri.

There is some news about youth players leaving on loan, but if they are worth talking about, we’ll hear about it during the season.

Also frankly, looking at the possible roster I wrote about above, I really hope we come up with another midfielder… or 3…

Next week: If things settle down a bit, amongst other things I want to talk about the Manuale di prostituzione intellectuale