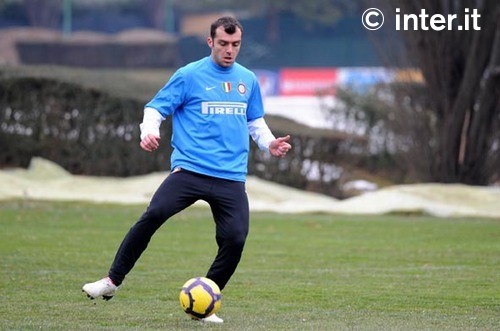 26 year old forward Macedonian Goran Pandev has officially been announced as the newest member of Inter and has signed a contract that ties him to the club until 2014, according to Inter.it. He will be wearing number 27 for the rest of this season. Rumor has it that he will make about 3.5 million Euros per year. 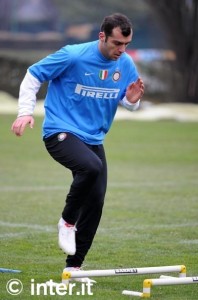 This is Pandev's second stint with the club. Goran was part of the club's youth system at the age of 18, from 2001 until 2004. During that time, Inter sent Pandev out on loan twice. The first stop was in the old Serie C at Spezia where he had 22 appearances and totaled 4 goals. He then went to Ancona after they had been promoted to Serie A where he had 20 appearances and totaled 1 goal.

In 2004, half of Pandev's card was sent to Lazio as part of the deal for Dejan Stankovic to be transferred to Inter. The other half of Pandev's card - and the end of Inter's involvement in his early career - went to Udinese when Inter signed David Pizarro, who couldn't break into the starting group, subsequently transferred to Roma and reunited with ex-Udinese coach Spaletti a year later.

Pandev would go on to have a very good term at Lazio from 2004 to 2009. His career totals are 159 games with 48 goals - which equal slightly less than 1 goal every 3 appearances. However, his first season at Lazio saw 3 goals for 29 games. If we throw out that first year as settling time for a young player, Goran's total's become slightly more impressive - 130 games and 45 goals or a goal in every 2.8 appearances.

Pandev is a classic example of a second, or shadow, striker. He lacks the height, strength and aerial ability of a main striker and, in addition to good dribbling ability and a good shot, he has a decent passing foot.

He has definitely proven himself to be a Serie A worthy forward at Lazio. True to, in my opinion, is his natural position he is best when paired with another forward who has the ability to work off his passing or dribbling. Which is something that he'll have plenty of opportunity to have at Inter. Plus, he adds to the growing trend of high workrate forwards that we seem to be accumulating. 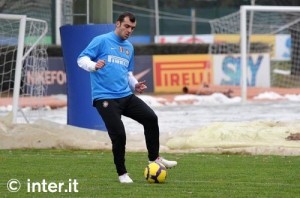 The down side of the Pandev signing is that he has yet to prove that he can settle with a club quickly and become a force the year that he has signed. He also continues the trend of Inter's attack of being a little shrimpish. Eto'o, Milito, Sneijder and now Pandev aren't going to win many balls that the defence hoof up the field nor are they likely to be on the end of many crosses. Besides, how is his condition? Is he game ready? No one can really say until Wednesday.

I understand the move. It is brilliant financially. And it, so far, outstrips what the competition has done this Winter Mercato to improve. I mean, how has Milan improved their squad? They got a youngster who no one knows what he's worth and David Beckham, who we all know exactly what he's worth - or rather, how many shirt sales he's worth. And Juventus have only sent a couple player out on loans.

"Thanks. I'm very happy. It has always been my dream to stay at Inter, but things have gone well all the same. I have grown, I have become a man and a true player, and today I'm happy to be here. I hope to start winning again, and winning a lot more with Inter."

"Yes, 2010 has started very well. Now we need to win, win the Scudetto and do well in the Champions League to make us all happy."

"In these last few days I trained in Macedonia, while in the last two months I worked with Lazio. I'm at the service of the coach; he makes the decisions. I am ready and there are no problems."

"I hope to score a lot, but most of all, to win. It doesn't matter who scores the goals. It's important to give my contribution to the team. I have met my new team-mates and they are all great lads. Inter is a great team and a great group, this is why it's winning a lot." 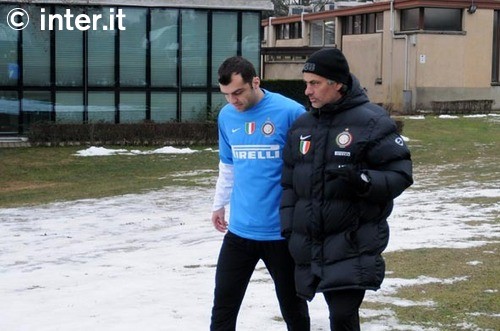