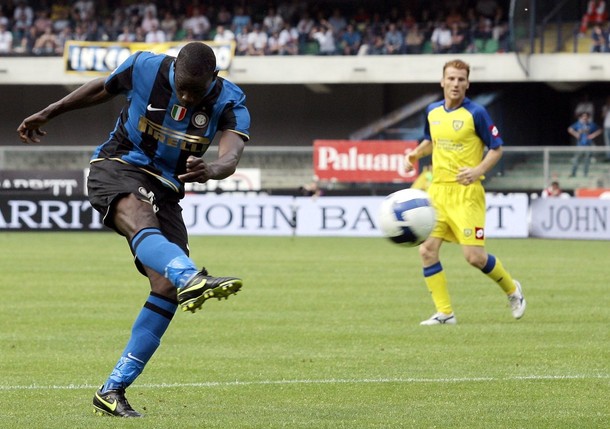 The break is finally over and Inter find themselves traveling to Chievo Verona for the early game on Wednesday. This is one of those games that has me very worried: Inter will be without several key players; we are coming off a break and have lost some of our momentum; and all our rivals have had time to regroup and may come back stronger than before. So, although it is still early days, when we look at MAD's Guide to Winning the Scudetto©™(patent pending), we see that Chievo is one of those teams we must take full points against if we want to win the league. This will be no easy task: except for a little hiccup against Napoli before the break, Chievo were going gangbusters, beating Palermo and Fiorentina at the Bentegodi. This may be a bit of a nail-biter, folks.

What: Chievo Verona v Inter Milan, matchday 18
Where: Bentegodi Stadium, Verona, Italy
When: Wednesday, January 6, 12:30 local time (3:30 am pacific, 6:30 am eastern)
How to Watch: FSC is reshowing this game at 8am pacific, 11am eastern. If you want to watch it live, ESPN 360 will be broadcasting it, or you can find a stream: MyP2P, Rojadirecta, Ustream, and ATDHE.net.

Chievo, being a relatively young team with not a whole lot of Serie A years to its name, does not have much of a history with Inter. In fact, the two have only met seven times in Verona (total!). The results are three wins, three draws, and a loss. All the games were relatively low scoring (no one got more than 2 goals), and in no game did Inter fail to score. Last year we went to Verona at the end of the season, mere moments from achieving our 17th Scudetto. We were also with a largely makeshift squad (no Ibra and with Cruz, Crespo, Burdisso, and Jimenez on the pitch). The game ended a lucky 2-2 (we so could have lost this one). The highlights:

Chievo are an interesting team. You never really know what to expect from them. At first glance, they appear to be your basic bottom-half relegation-battling team: they currently sit at 12th place, with 20 goals scored and 19 conceded - just about dead center of the table. But then, when you look a little closer you see that they are only three points from 6th place, and that with 7 wins, they are at the same level as Palermo, Fiorentina, and Genoa - all usually top-half finishers. So far this season, Chievo have scored in all of their home games. Additionally, they have never been outscored by more than one goal in their three home losses. This team has it in them to do well and should not be written off out of hand. Keeping a clean sheet against them will be a real chore.

Sergio Pellissier, Michele Marcolini, and Giampiero Pinzi all bear watching. Pellissier and Marcolini are the squad's high scorers with 4 goals a peice while Pinzi has an additional 3 to his name. Pinzi is also the team bad-boy, having accumulated 7 yellow cards this season already. 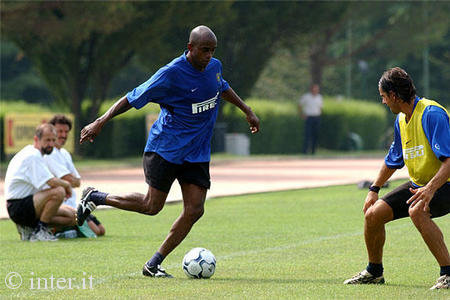 Ex Inter player Luciano (shown here in 2003) scored the equalizer last year. This year he warned his friend Julio Cesar to "be careful" because he is looking to score again.

Something else to think about: it is going to be cold in Verona tomorrow afternoon. Right now the forecast calls for snow showers starting late tonight, clearing by about 11am (local time). Even if it doesn't snow, the high is only predicted to be 37°F by noon. Yikes. There is a slim possibility that this game could be postponed due to weather conditions. 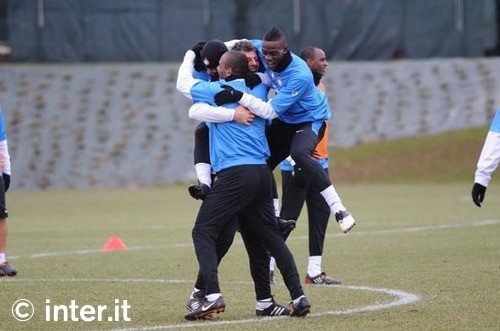 They are huddling together for warmth, presumably.

As you can see, the midfield is looking mighty thin. Stankovic and Thiago Motta are suspended (although Motta is also injured), Muntari, Krhin, and Cambiasso are all injured. I thought Quaresma was also on the injury list, but it looks like a slightly hobbled Ricky is favored over an incredibly sucky Mancini (any of you who watched that last friendly will know what I mean). Samuel is also a surprise. I figured that since they were not ready for the friendly in Saudi Arabia, they would not be on the list today. Santon, though, has re-injured himself.

So, to fill in all the gaping holes, Mou has turned to our youth team giving Donati, Stevanovic, and Crisetig a run out. Plus, there is the possibility of seeing the Inter debut of Pandev. That could be a whole lot of firsts - too many for my taste.

Of all of these new options, I think the most likely new addition with be Stevanovic. He played 70 some-odd minutes against Al-Hilal, and even though it was only a friendly, he played pretty well and in a position we need to fill. Donati also looked ok agianst Al-Hilal, and that would mean Chivu could move up to midfield. I wouldn't hold your breath over Arnautovic. Getting to training three hours early may get you a call-up but I dont see it getting the kid a place on the bench (let alone the pitch) tomorrow.

Ok, now for lineups. La Gazzetta and I disagree on this one. They think Pandev will start - I am not so sure. They also think we will play a 4-2-3-1. Once again, I wonder if, with all the personnel changes, Mou may decide that playing a formation the rest of the squad is used to will make just one less thing to worry about. Here is their lineup:

That just seems overly complicated to me. Plus, I dont like Milito up there alone. Why not just play our more usual 4-3-1-2:

Still, Mou made it sound like Pandev would get some pitch time tomorrow, not to start, but probably at least a couple minutes. When asked if, like Sneijder, Pandev will make an immediate debut, he said:

"They are a little different, because Sneijder had played a few races with Real Madrid and many games for his country, he came in short with enough playing minutes in his legs. For Pandev is a little different because there are several months of not playing, and he has played only two games with the national team. Another difference between the two is the fact that Sneijder arrived a time when the team had a hole there, in that position, while Pandev playes in front, where we have Balotelli, Milito, Quaresma returning, and Arnautovic was also summoned. In short, the situation is different, but he is available and is a player that I like very much: it seems to me that tomorrow he will play. I do not know how long but he will play."

I guess we will all just have to wait and see what happens tomorrow. Mou is keeping his options open. Did anyone else notice that there were not photos from training up on the web page today? Very sneaky, Mr. Mourinho.

Ok. So I think we can all agree that it is very very important for Inter to take all three points against Chievo tomorrow. A draw would be bad, but not nearly as disastrous as a loss would be. The weather conditions will likely be crappy (to put it mildly) and coming back after a break is never easy. Still, if Inter are serious about the Scudetto, it is in precisely these conditions that we must triumph. Hopefully all our missing players will mean the squad is more concentrated and motivated (trying to find a silver lining here). Perhaps being a little off balance will work to our favor by counteracting any complacency playing a mid to lower table team sometimes fosters. Plus, any new guys will desperate to show their worth. You never know, having two-thirds of our midfielders unavailable may turn out to be the best thing that could have happened. Lemons into lemonade - I tell you! 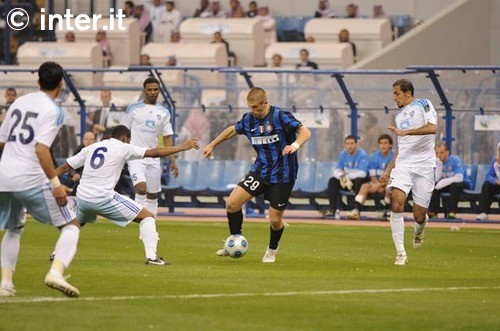 Stevanovic in action against Al-Hilal on Saturday. Tomorrow could be his big break.

I dont know about you all, but I will not be watching this game live. I love Inter but I dont think I want to get up in the middle of the night to watch this. For all you hardy souls, or those in more favorable time zones, cheer extra hard - I think the boys will need all the help they can get.

I hope all you Interisti have been good girls and boys so La Befana will bring us 3 points tomorrow!

Totally off topic, but boy, Javier Zanetti sure likes him some Toldo! Plus, could the caption be any more wrong? Yikes. 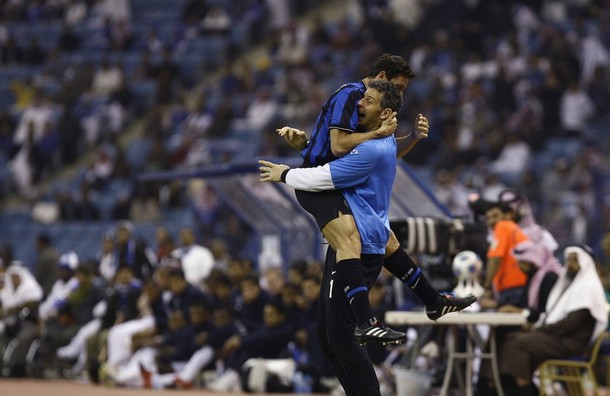