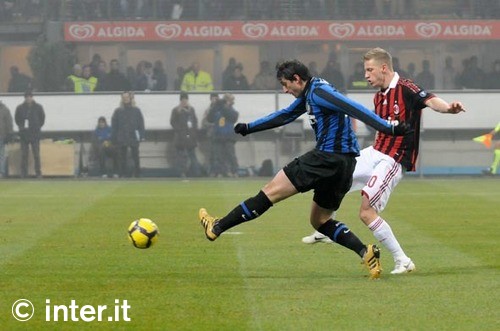 For all of you who have found Inter during the last four years or so, it feels a bit wonky to be coming at the derby in a relative position of weakness. That is, to not at the top of the table with everyone looking to pull us down. For the rest of us, it seems a bit like we are caught in some horrible time warp and transported back eight or ten years. Well, there is no use crying over the spilled milk of this season so far. All we can do now is get behind our team and hope that this will finally be the game that turns things around for us.

What: Inter v Milan
Where: San Siro, Milan
When: Sunday, November 14, 8:45pm local time (11:45am pacific, 2:45pm eastern)
How to Watch: Live of Fox Soccer Channel (and these channels) or find a stream: MyP2P, Rojadirecta, Ustream, and ATDHE.net
Liveblog: Yes indeedy do. 15 minutes before kick-off, with bells on.

Last year, Inter won this tie despite every possible impediment. We were down two players (thanks to some dubious calls) and still managed to win by two goals to zero. And Julio Cesar denying that penalty to Ronaldinho? The icing on the cake. The Inter who played that game got even the most skeptical among us believing in them. It was almost magical. See for yourself:

Wow. Who were those guys? Because it sure seems like a long time since I have seen them. More to the point, will we ever get to see them again?

Here is where I usually do a THEM section. I am not going to bother this time. There is a large and vibrant Milan board here on the offside. Check them out for the other side's view.

On the up side for us, some familiar names are back on the call-up list again:

Maicon is still out, which is, I suppose, for the best. That is, I would rather he take the time to find himself than play and play like crap. There really isn't much point of discussing Samuel for this season. I know that it is horrible to think about, but we may have to brace ourselves for the fact that we may all be living in a post-Wall world. Thiago Motta is another on that list. Best just to assume he no longer exists. Last I heard, he was back to running (again), but they really dont know what the deal is with his injury. Or Mariga's. And to tell you the truth, after the last two games, I am just thrilled to have Cambiasso and Julio Cesar back in the mix. Players like Thiago Motta and Maicon (the real Maicon) just seem like pie-in-the-sky extravagance.

"Between Sneijder and Cambiasso, Chivu smiles." I ask you: who wouldn't?

Word is, Rafa will go back to a diamond midfield, our old friend the 4-3-1-2. Benitez even hinted that he might, although not in response to anything Milan may do, saying:

"We think of ourselves. Before anyone asks me if we would play with the 4-2-3-1, with the 4-4-2, or with the diamond, I said that Mancini, Mourinho, Cuper, and Herrera had used the diamond before me, therefor we will use this formation if we think that it would be best for the team in this moment, otherwise we will change based on our available players and the idea we have for our team, not that of our enemy."

So he isn't ruling it out. He also isn't making any promises about players being ready. Although both Cambiasso and Julio Cesar are on the list, Rafa says that neither are at 100% so either or both could start on the bench. Rafa did say it was a bit easier for JC as goalkeepers dont run as much, but I think the final decision will be tomorrow.

There has also been a lot of buzz around the possibility of Materazzi starting in defense tomorrow (see, didn't I say it felt like old times?). Rafa would only admit it was a possibility. Which has the pundits all a twitter with the possibility of a Zlatan/Matrix battle. I think that Marco has one, maybe two really great games in him a season. He bleeds black and blue, so this could very well be his one for the season. I say, what the hell, give the old guy a run out. No guts, no glory.

Anyway, the speculation is, given that both Cuchu and JC are given the all clear to start, the lineup may go a bit like this:

And that is a best-case scenario. To tell you the truth, it doesn't make me groan and clutch my head in fear. Sure, I would prefer things a little differently, but as we are just about out of full backs, I dont see what choice we have. Santon is still struggling with form and Maicon is broken so it looks like this all-central-defender-all-the-time line up will just have to do. It just has to. 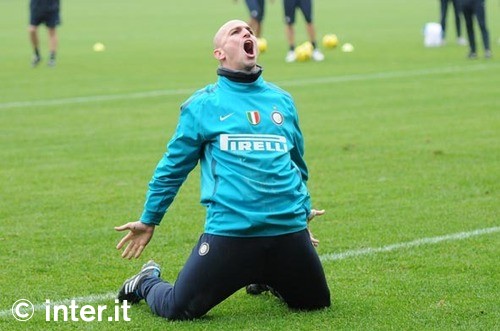 Proof that football players practice those post-goal celebrations. You wouldn't want to pull something, after all.

This game is always a passionate affair - one of the great world football rivalries. Last season we went into both games as the underdog. This year, it isn't any different. Galliani is already making grand predictions that if Milan win the game tomorrow, they will win the scudetto. No such declarations have come from Inter brass. Instead, we have only a slightly desperate Rafa assuring the press that Inter are just as hungry as they were last season, that we are a team of champions, and Inter is still strong.

So yes, we are rife with injuries, our coach has not been inspiring confidence recently, and, well, neither has our playing. I think it is fair to say we are down. But that doesn't mean we are out. There is still time for the team to pick themselves up, dust themselves off, and make a serious stab at this championship.