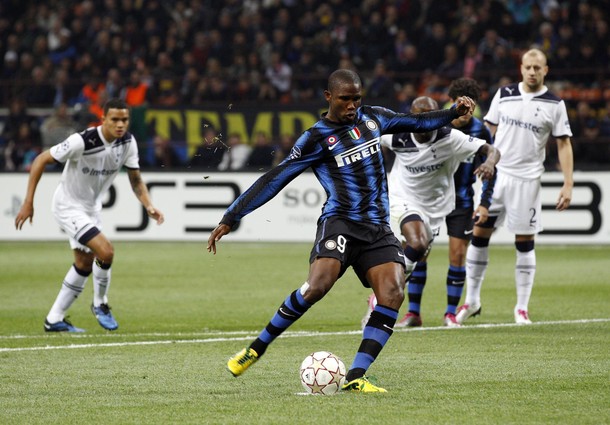 This wasn't ever going to be an "easy" game. Well, with our spate of injuries, it just got exponentially harder. Yep, no Julio Ceasar, no Cambiasso, no Mariga, no Stankovic, no Thiago Motta. If ever there was a time for grit and determination, this is it. I'll tell you what: if Rafa can pull three points out of this game, I will finally take him seriously. How about that for encouragement, Mr. Benitez?

What: Tottenham Hotspur v FC Internazionale Milano
Where: White Hart Lane, London (I am certain that Hotspur fans would like me to point out that a hart is a boy deer)
When: Tuesday, 8:45pm local time, (12:45pm pacific, 3:45pm eastern; Europe has already "fallen back")
How to Watch: Live on Fox Soccer Channel (other channels here) or find a stream: MyP2P, Rojadirecta, Ustream, and ATDHE.net
Liveblog: Yep. Here on the Inter Offiside, 15 minutes before kickoff.

Inter does not have the best record against teams from the UK, especially away and especially against English teams. Of the 21 times Inter has played a team from the UK away, we have only won five times (yikes). More specifically, aside from that win against Chelsea last season, Inter has not won away in England since they beat Arsenal in 2003. So no help from history. Inter and Tottenham have only met one time and we all know how that turned out: Inter played a glorious first half only to fall asleep in the last 10 minutes and almost let it all slip away. Sure, some of their comeback is due to the genius of one Mr. Gareth Bale, but quite a bit of it was our own stupid fault.

I refer you to the highlights:

Two weeks ago was my very first introduction to Tottenham Hotspur and their fans. I learned all sorts of new things. Most importantly, that Hotspur fans are quite tetchy about their crest and slightly defensive about the whole chicken aspect of it. They were all very concerned that I understood it was a boy chicken: a mean, pecky, boy chicken. Ok, I get it, it is a cock... A huge cock. Gotcha. (They did say cockerel, but how can they be sure that bird is less than a year old?).

I was also accused of not doing proper research. I didn't have the heart to tell them then that it turns out the team I thought was Tottenham is actually Fulham. I was quite proud of myself that I figured out the difference. Anyway, I bet I know more about the EPL (or BPL or whatever) than they do about the Serie A so we are even.

According to the British press, Harry Redknapp will have to do without the injured Jermain Defoe, Michael Dawson, and Ledley King; and the suspended Heurelho Gomes. Rafael van der Vaart pulled up injured during Tottenham's game with Manchester United last weekend, but apparently trained today and will be available on Tuesday.

I have no idea what sort lineup they will field, but I expect it will include Gareth Bale. As for the rest, I suggest you take a look at the Tottenham Hotspur page. Anything I come up with would be sheer speculation.

Hot off the La Gazzetta presses (note, they start Pandev over Biabiany): 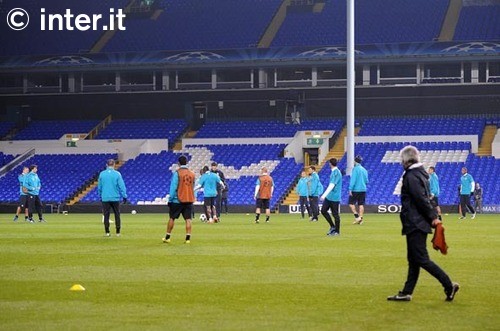 Rafa has called 21 players to try and scrape something together with:

Cripes. You will notice one Alberto Gallinetta on the list. He is our Primavera team keeper and a clear example of the injury hole we are in. This will be Castellazzi's full Champions League debut - he played a half against Werder Bremen, but this will be his first start. So far, he has done a pretty good job the two times he has come off the bench. He has yet to concede a goal. Let's hope his good form continues.

Another clear sign of our predicament is the inclusion of Amantino Mancini on the list. While the sonar generated in his huge forehead may be quite useful for foraging along the bottom of the sea, I doubt it will be much use against Tottenham. Even so, a quick look at the call-up list shows a terrifying dearth of midfielders and Mancini is arguably better than pulling in someone from the stands.

As for lineups, I fear we may see Biabiany again and I still say he is a useless passer. Sure, he is fast, but if you cant pass or shoot the ball, what is the point?

So, that means (I wrote this before I saw La Gazzetta's projected lineup and I am sticking to it!):

Does this make me feel confident? No. Assured? Nope. Do I think they can win anyway? Yes - but it is going to be hard and they will all have to play a damn sight better than they did against Genoa. Personally, I would rather see Eto'o on the wing instead of Biabiany and Milito up front. I know Eto'o has been scoring, but he can score from the wings as well and he is much much better defensively than Biabiany. Does Rafa listen to me, though? Nope. So I fear we will be stuck once again with Jonathan.

Rafa's press conference, as usual, wasn't a whole lot of help. He spent some time talking about Liverpool (who cares? Move on, Rafa) and why we have so many injured players (because of national commitments and they are injury prone; Mariga's case is the only outlier). He did say that both Milito and Pandev have recovered and are available. Besides that, just the typical "it will be a hard game but we will try to win" type stuff. Yawn.

There is nothing much left to do but play the game. On the up side, if we win, we will qualify for the next stage of the champions league nice and early. Also, we dont have to win this fixture; even a draw will put us in a good place to go through. I am trying to remain positive. Certainly Inter has shown that they can do quite well against Tottenham. If that first-half squad shows up, then we might have a shot. Dont get me wrong, I have all faith that our first team can take theirs. What I am not so sure about is what we have left over given all these injuries. While it is true, they will also be missing some key players, I wonder if they are at the Mancini Stage like we are (which is only one small step above the dreaded Rivas Stage). I guess, in the end, it will come down to how well the team has prepared and how badly they want to win. Given that, the more I think about it, the more hopeful I become. Inter really did play well against Tottenham (until we didn't, that is) and if there is one thing I believe Benitez actually knows it is the Premier League (or Premiership or whatever). We know what we are up against, and, if we can go to Stamford Bridge and get a result, we can do it at White Hart Lane.

We can do this, I am sure. Absolutely.

Dont forget to join us here for Kirby's live blog.

How about a little Samu, our Savior, to get us in the mood?