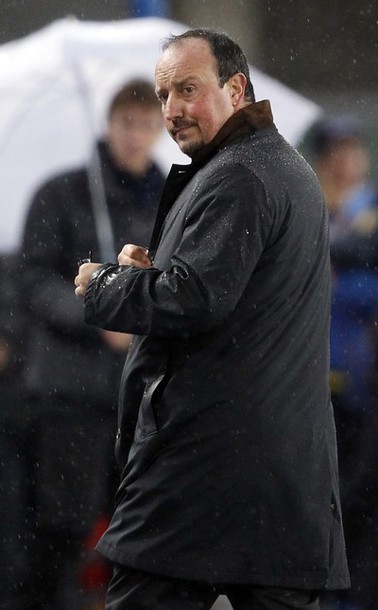 As I have written here before, when your team plays badly, it should lose. And play badly it has.

It’s a mark of a team ready to challenge for a championship, that one can overcome adversity, bad luck and injuries. Clearly we aren’t ready for that.

There was a tantalizing chance for us early on to set a tone and make Chievo climb up hill for the whole game. But when it rains, as the saying goes, it pours and we were only able to hit the post.

My Inter player of the game can only be Lucio. He’s the only one to up his game during the current difficulties. 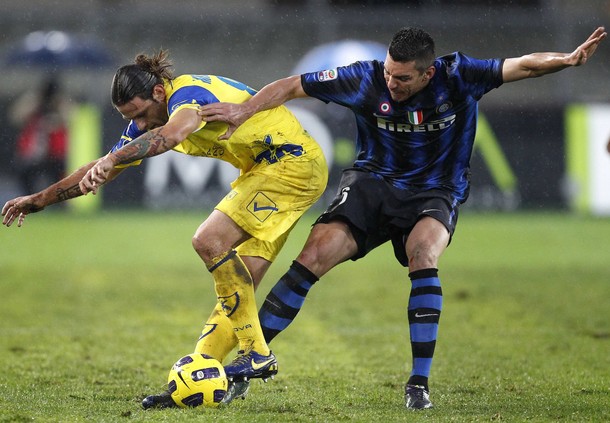 Pandev: Early on Pandev looked okay, but when he blew his goal he wasn’t heard from again. 3.0

Stankovic: I lost count how many times Deki lost the ball on poor passes or poor touches. I understand that a long lay off needs some time to get back in the swing of things. But Poor passing, poor tackling and poor trapping… equals poor game. He certainly took his shots… I sure hope that one day someone can tell me why he’s shooting so much. It baffles the mind. 3.5

Biabiany: I just didn’t hear enough from him this game. Did anyone hear the play-by-play guy utter his name? I don’t recall him doing much at all. 3.0

Sneijder: If he was the third heat from last season, he’s certainly lost his spark this season. He’s coming back too far to get the ball and he’s not making useful passes. 3.5

Zanetti: Both goals from Chievo came from crosses that weren’t pressured enough. It’s hard to know who was supposed to be where as Zanetti and Santon were flipping – but the truth is that both were caught out of position several times. 4.5

Santon: I thought that Santon couldn’t have done much on the first goal; Pellissier is a good forward who’s made better than Santon look stupid. And if I am puzzled by the lack of pressure on the cross for the second goal, then I can’t be mad at the only one who *did* attempt to pressure the ball. Santon also went forward and tried to make stuff happen up the field – including in the midfield, which I will get to later. 5.0

Cambiasso: It was a meh return to the field for Cambiasso, but I was personally happy to see him back. He didn’t look ready and in a fit of sanity Benitez subbed him off before he pushed too hard and we lose him again. 5.0

Cordoba: Very meh game from Cordoba, but I am personally disappointed by his performance. Pellissier is the perfect forward for Cordoba to be on the field for – so why wasn’t he on him more? 4.5

Castellazzi: It’s hard to blame Castellazzi for any of the goals. The crosses in weren’t pressured and the players sitting in the middle of the area weren’t covered. Not much he can do. He did help make the score not be worse late in the game. 6.0

Eto’o: He scored and that’s really the extent of his “good” performance. I’ll get to his other silliness later in the Moviola section. 6.5

Lucio: Hard times, a former coach lectured me, require that you work harder not that you should give up. Lucio isn’t 100%, in case you haven’t noticed. He’s played in almost every game this season, certainly more than almost everyone. He’s upped his game to try to cover more ground and stick his nose and disrupt more attacks. I will give him credit for that. 7.5

There is only one incident that really requires any sort of slow motion and it’s a good example of why I dislike referees.

Cesar, the defender of Chievo tried to get around the arm of Eto’o, who was shielding the ball, by hacking at Eto’o’s arm and caught Eto’o in the back of the head who then squatted down to get the attention of the ref that something happened.

With the ball placed for a free kick, Eto’o, in an attempt to prove how few brains he possessed to Cesar, head butted the defender in the chest. It didn’t look like the rearing back of Zidane in the World Cup but Cesar went down, much like Eto’o did, to catch the attention of the ref.

The ref report says that he didn’t see it, which is why there was no expulsion given – as opposed to the derby where the ref was trying to justify his poor decision to the players on the field.

Eto’o will get at least a justified 3 match ban for his stupidness. Cesar might something as well, but to bring back the opening statement of the moviola into this mess, the ref could have kept both players from missing time through suspensions by cautioning Cesar, which he deserved for a professional foul and telling Eto’o to cool off. The whole game could have been saved from a controversial point of view.

We keep going back to the basics with Benitez and he’s just not getting it. We can’t score. We haven’t been able to average a goal a game for the past month. So, instead of putting players in the back and try to lock down the defense, he continues to attack with players who aren’t scoring.

I’ll say it again – you have to defend before you can attack. If you can’t hold the score down playing against Chievo with 6 players: 4 defenders and 2 defensive midfielders then you need to put more personnel into the defense.

Chievo played the whole game packing their half with 8 players and then launching the ball 40 meters to Pellissier. We were committing so many players to the attack that we were playing 2 defenders on a forward and an attacking midfielder. Folks, 2v2 odds favor the attack. That’s why we start with 4 in the back plus 2 defensive midfielder there to begin with. Once the rest of the Chievo attack, which constituted another midfielder I think, caught up with the ball and one of our fullbacks made the 60 meter sprint back the odds were still crappy for us.

I never minded Mancini playing defensive with 3 defensive midfielders playing in front of 4 defenders. I never minded Mourinho playing counter attacking/stall tactics. I do mind playing stupidly. Maybe with the full compliment of talent on our roster, this plays better, but hard, cold, bitter reality is that we *don’t* have the full compliment of talent available. I used to think that Benitez was trying to attack to take away pressure from the lack of a midfield. Now I am not so sure that the man understands that we had something like 11 players missing – that we are going to be missing Eto’o until next year, soon.

Let me be clear, I don’t think that the man has the mental capacity to realize that there are injuries and that maybe a change in tactics or an adjustment of some kind might be useful, rather than plugging in inadequate substitutes into a formation that isn’t working for us and hasn’t worked since before I was carving pumpkins in my kitchen this fall.

I mean, he does know that he CAN change the formation to add emphasis to the defense and keep us in games… right?

Just out of morbid curiosity, does anyone think that Benitez will make it to the end of the season?

But then again, what do I know, I am apparently just a bandwagon rider from the mid eighties... 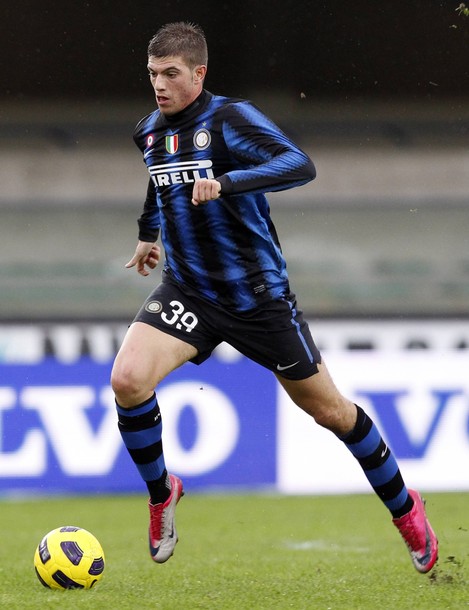