Share All sharing options for: Inter v Brescia: I Shudder To Think... 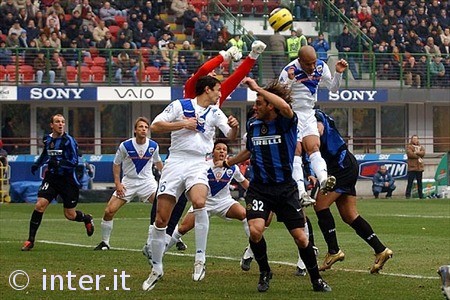 What Rafa is going to come up for this one. Basically, Inter has no midfielders left - Benitez has broken almost all of them (this is why you cant have nice things, Rafa). I, along with many other fans (and perhaps Inter's President as well) have reached the end of my rope with Mr. Benitez. If he cant make something positive out of this game, well then that may just tear it. (Mixed metaphors, what fun!)

WHAT: Inter v Brescia, a Lombardi Derby
WHERE: San Siro, Milan
WHEN: Saturday, Nov. 6, 8:45pm local time (12:45pm pacific, 3:45pm eastern - we still haven't fallen back).
HOW TO WATCH: Live on Fox Soccer Channel, ESPN3, ESPN UK, and Setanta Sports Australia. If none of those work for you, find a stream: MyP2P, Rojadirecta, Ustream, and ATDHE.net

Dont forget to join the liveblog 15 minutes before kickoff. Here on the offside.

Brescia has spent most of their existence in the Serie B. They did spend a few successive years in the Serie A in the early 2000s, buoyed by the genius of one Roberto Baggio (the divine ponytail himself). Baggio wasn't alone, other great players also at one time or another played for the Biancoazzurri. Players like Andrea Pirlo, Luca Toni, and Pep Guardiola. Luminaries, even.

Inter and Brescia have met 60 times in the Serie A: 30 times in Brescia and 30 times in Milan. Lets just say that Brescia doesn't do all that well in Milan; historically speaking, that is. Inter has won 25 of those 30 games, drawn an additional 4, and only lost 1 (way back in 2004). The goal statistics are even more dramatic: Inter has scored 91 goals against Brescia while only allowing 19. Our last meeting at the San Siro was back in 2004 when a first-half strike from Sinisa Mihajlovic saw Inter win by the slenderest of margins (1-0).

And what do you know! I actually found highlights! (in a strange turn of events, Castellazzi was the keeper for that game as well - just for Brescia instead of Inter. Funny old football).

Brescia's squad is sort of a who's who for journeyman calcio players from the last 10 years or so. Players like Caracciolo, Diamanti, Filippini and Baiocco (one of my most hated players) have been kicking around mid-table Serie A teams for years. They do have one fading star in Zebina, but for the most part they are a squad made up of players whose name you know but who never really made it big. And yes, I hate Baiocco. I once heard an announcer describe him as having absolutely no athletic skill what so ever and I have to agree.

Brescia has not had the best start to the season. They have 9 points from 9 games so far, and have only scored 6 goals. They are at 16th place on the table. They have only won a single game on the road (against Chievo), losing the other 4. Strangely, they haven't recorded a single draw in the Serie A yet this season.

La Gazzetta thinks Iachinni will be in the holiday spirit and play a 4-3-2-1:

The really bad news for them is that their starting keeper, Matteo Sereni, is out injured. Arcari is the keeper that helped Brescia to achieve promotion, though, so he cant be all bad. Up front, Caracciolo is the danger man; with 3 goals, he is their top scorer. The other five of their goals come from five different players so they are not reliant on any one guy up front. 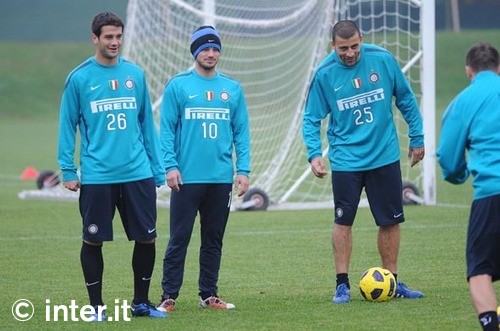 Even when he smiles, Samuel is a little scary.

Rafa has actually found 20 uninjured players to call up:

If the aren't on the list, likely they are injured. I dont know what Rafa is doing to these guys in training, but I find it strange that they all these guys are out with very similar injuries. It is just one more thing Benitez is doing to piss me off.

Well, that and calling Inter a Volvo. I mean, come on... A Volvo?!? A Volvo is probably the single most unsexy car I can think of. Around here, Volvo's are known for their extremely safe station wagons... Basically, cars for yuppie breeders, full of cheerios and toddlers. They are mundane, square, and, well, boring. Mr. Benitez, if Inter is a Volvo it is because you made it that way. Last season Inter was a shiny black and blue SUV, tricked out with bullet proof glass and puncture-less tires. Sure, we weren't fast, but we were confident that nothing could stop us. In a word, we were tough. I still have hope that the team can find that inner SUV 'cause Rafa's sad little station wagon is giving me heart burn. 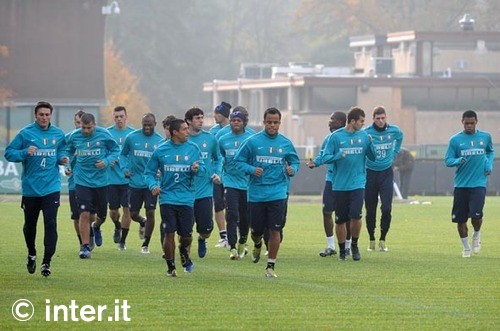 Moving on. Besides the Volvo line, Rafa didn't give up much at the press conference today. He agreed with Moratti that Inter played like poop against Tottenham but pointed out that they have played well in other games. He was asked point blank about why he is clinging to this non-functioning formation, to which he said:

I analyzed the first team, that played last year with different formation: the 4-3-3, 4-3-1-2, the 4-2-3-1. The most important games were played with this last formation. We have kept count of the player we have and we have thought that we would play like this, and I think that the team has done well, has played well and made goals, with balance. Now we have some injured and therefore we have lost something, so if we must adjust, we will adjust, but it is not a question of formation, but of attitude and intensity, of working all together.

.What?!? It isn't a matter of formation? Is he kidding? Hands up: Who thinks this team would benefit with a change in formation, at least until we recover some of the injured?

yep, just about everyone. The team is clearly struggling to defend properly, so why not play a wider, deeper midfield? Plus, since we have two (arguably) great strikers, wouldn't it be to the team's advantage to play them both now and then? Well, you cant do either of these with this formation. How many times do we need to get punched in the face before Benitez figures out that we have to 1) block a bit, and 2) start hitting back?

I swear, that Koala bear is really starting to piss me off.

He wouldn't give much away about lineups, except to say he had been working with both Obi and Nwankwo. And I guess that from the answer above he will play the same old failing formation. La Gazzetta thinks he will mix it up a bit, though, and has predicted:

And that seems like a squad that is there to win. Sure, Eto'o wont be happy with it, but since we are locked into this formation, I dont see what choice we have.

Given all the injuries (and Rafa's completely inexplicable choices), I think this is a great time to bring back the line-up contest. If you can correctly read the Koala Bear's mind and predict the tomorrow's line-up, you will be awarded with the title of "Grand Imperial Poobah of All Things Inter" and all the bragging rights there-in. Plus, you get a certificate. An official one. Suitable for framing. It truly is the greatest honor one can achieve here on the Inter Offside.

But this week wasn't all about getting our asses handed to us in England. We also got to find out a bit more about Eto'o and Santon.

Eto'o was grilled by a group of children on the show "Who Caught Peter Pan."

(terrible quality, but you get the picture)

Santon was interviewed by an adult on Inter 360.

The big news here is that Santon is engaged and has been for over a year! Did you know that? I didn't know that. To a girl named Hera - good, strong name. You just cant go wrong with a goddess.

Oh, and he has 6 tattoos: a scudetto to commemorate his first championship, a Champions League trophy on his leg, his Grandfather's name (Giovanni), his brother's birthday in roman numerals (spent a little too much time with Zlatan), a heart with the initials of some family members, and the symbol that means samurai. Gossip wise, he did admit to not being very good friends with Balotelli. I guess they had a bit of a falling out over something.

Everyone knows this is a must win for Inter. MAD's Guide to Winning the Scudetto™©® clearly states that all lower table teams must be beaten - especially when playing at home. I think the team will come out with something to prove (at least, that is my hope), much like they did in the Italian Supercup after losing the UEFA Supercup. Iachini has the same thought, saying: "I would have preferred that Inter won in London because with that KO they have taken on the message from President Moratti to his boys. And the pride of the great champions has been stimulated in these cases."

I think I speak for all us Inter fans when I say: I freaking hope so! I hope the pride of the great champions has been stimulated because it is time to start acting like a team again. Even if Mou isn't there to whisper in their ears while showering any more. I mean, it is all well and good to win with one of the best coaches in the world, but to win under Rafa? That would be a real accomplishment.

Dont forget to come here for the liveblog. For you here in the States, dont forget we are an hour behind so the game will start an hour after you expect it to. We fall back early Sunday morning then everything will go back to normal.

Plus, the Offside has finally set us up with a Facebook page. It is rudimentary right now, but I hope to spiff it up a bit. Suggestions will gladly be accepted.

For the Inter fan with a bit more disposable income, I give you the Filia Gioielli Internazionale Collection. Christmas is coming and everyone likes jewelry. Everyone.

What could be better than an Inter crest pendant in gold with black and white diamonds and blue sapphires (yours for only € 2,210)?

For the more budget conscious among you, there is a diamond and sapphire ring (only €770), or, my personal favorite: a tiny little football boot charm (a steal at €880). 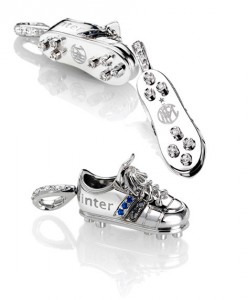 I dont know who actually buys this stuff. I was pretty excited when I got a free rubber key chain with a jersey I ordered. Plus, the Diamondelle "I Love Inter" necklace is in questionable taste - especially for €1820.