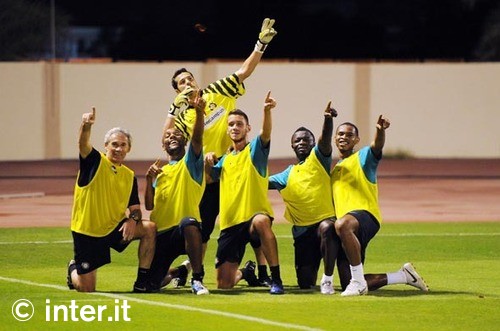 And here we go. Trophy attempt number three for Inter. So far we are 1 and 1 so this will be the tie breaker that may point the way for the rest of the season. A good result here would help point the squad on the path towards making something out of this season. Unfortunately, we have to get through the "All Powerful" Congolese team, Mazembe to do it. And it isn't going to be easy. These guys can play some football. Fast, attacking, organized football. And yikes, even their fans are intimidating.

Tout Puissant Mazembe Englebert are based in Lubumashi, the second largest city in the Democratic Republic of the Congo. It is in the far south of the country, just a few miles from the border with Zambia (everyone educated now? Good). They have done quite well recently in the Confederation of African Football Champions League, winning back to back titles in 2008 and 2009. As such, this is their second consecutive year at the FIFA Club World Cup. Last year they didn't do so well, finishing last after losing both their matches. 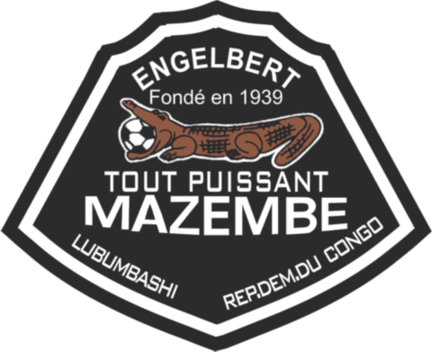 Cool crest. Although I bet that ball would be a little flat after the crocodile was done.

Clearly, they took it as a learning experience because they are doing quite well this time around.

First, they beat Pachuca, a pretty good team from Mexico, using a move that Inter is particularly susceptable to (basically, running fast past static defenders). Then, they moved on to the Brazilian Inter, Internacional, who were arguably the favorites to win this competition at the start. Thanks in large part to their talented keeper, Muteba Kidiaba, Mazembe beat Internacional 2-0, becoming the first African team to make it to the finals. Oh, and those two excellent strikes were a real help as well. Really, we cannot afford to give these guys any space. Zero. 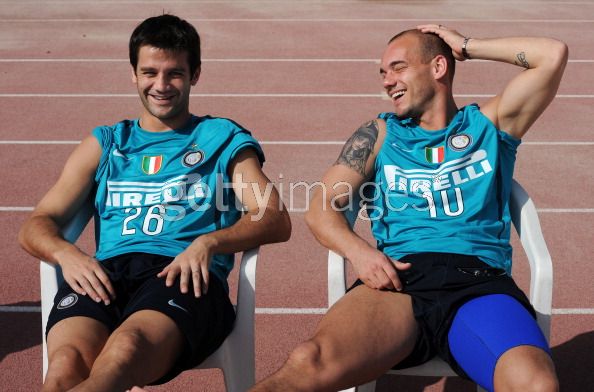 The boys, hangin' at training. Dont hate him because he is beautiful.

With this squad it seems to be take two steps forward, then take one step back: as soon as we recover some players (Milito, Chivu, Thiago Motta), another goes down. Sneijder has a muscle pull and will be out about 45 days. To temper that loss, though, Maicon says he is ready to take the pitch again. Hopefully, that will mean that Chivu will move into the center and Zanetti can play leftback. With Rafa, though, you just never know. 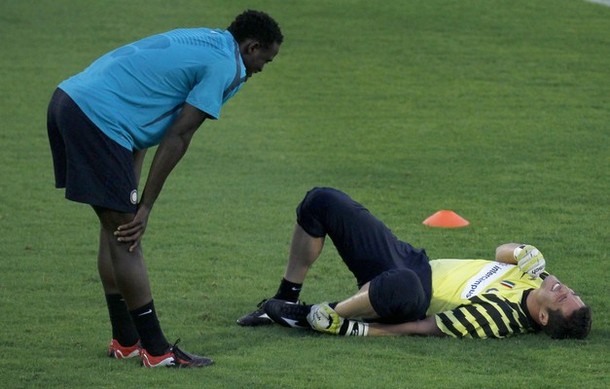 What the HELL is Rafa doing in training?!? He just got healthy! Dont break him again!

There were lots of press conferences today, including ones with Julio Cesar, Zanetti, Cambiasso, and, of course Benitez. The one theme that ran through all of them was that the squad should absolutely not underestimate Mazembe.

"I think that in a game like this we mustn’t single out just one of their players... We know they’re a physically strong team, like most African sides, and that they’ve got some very quick players... This year’s competition proves there are no favourites any longer." 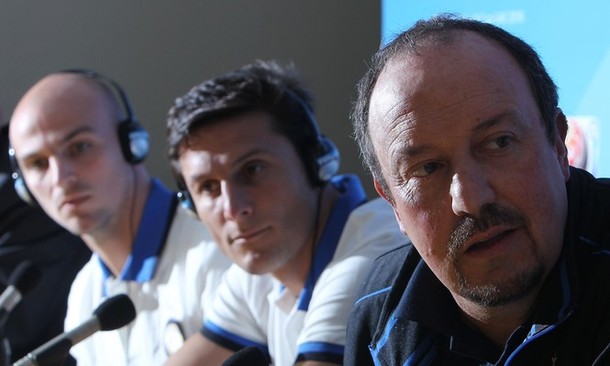 Zanetti and Cambiasso had much the same sentiments:

Zanetti: "It's a final and like all finals there are no favourites. That's even truer in modern football, where the overall level has evened out. There are no easy games and it would be a mistake to underestimate our opponents."
Cambiasso: "You can't afford to underestimate the opposition. On the contrary, we have to give credit to Mazembe for what they have achieved on the pitch: they knocked out two of the sides that were favourites to win this competition."

"Mazembe are a hard-working team, very strong physically, and they have some skillful individuals. A tough opponent. We know that we have to approach this game carefully, make no mistakes and play at the level we're capable of - and to do that we'll need to have maximum concentration."

So, I guess that means everyone is quite clear how important this game is and that it is imperative that the squad approaches it with the correct mentality. It doesn't matter that Inter is the favorite - Mazembe are good and they will totally roll over us if we dont take the game in hand.

I guess that just leaves line-ups...

Well, I know what I want but Rafa and I seldom agree. If it were me:

But I can understand the argument for starting Cordoba in defense and Motta on the bench. He and Lucio have been more time together and sometimes it is best to let things be. Time will tell, I suppose. 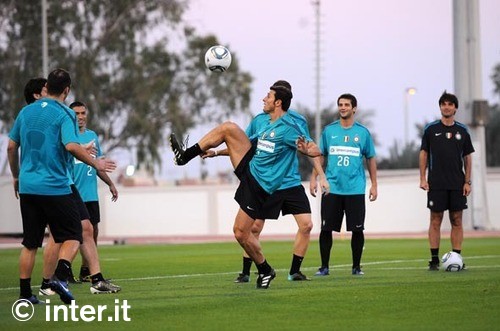 [swoon] The thighs, man, look at those enormous thighs!

Ok, we all agree that this is an important game for the club. Sure, maybe the tournament is silly and a bit of a fluff piece, but the squad seems to feel it is a bit of a talisman: win the Club World Cup and the season will turn around. Success tomorrow means new-found confidence and belief. A loss would be cataclysmic so I dont intend to even think about it.

We need this so everyone think happy thoughts. Happy, winning thoughts. Oh, and do whatever luck ritual works best for you - every little bit helps.

A little training. I guess they are as ready as they can be.