Tomorrow Inter are scheduled to make up their snowed-out game with Parma. Dont get your hopes up too high, though, because there is some snow in the forecast for tomorrow night. If the game is played, the weather will likely be miserable and the pitch conditions all sorts of crappy (sort of like our last game at the Tardini). With the exception of a few players on both sides, not all that much has changed since my original preview for this tie. Inter are still riding high on a series of important wins while Parma is experiencing a bit of a bad patch. Not to say this will be a cake walk for Inter. The squad is tired and sooner or later all these mid-week games are going to catch up with us. Lets hope we get a few more points between us and the chasing pack before that happens, though.

What: Parma v Inter, rescheduled Matchday 22
Where: Stadio Ennio Tardini, Parma, Italy
When: Wednesday, February 10, 8:45pm local time (11:45am pacific, 2:45pm eastern)
How to Watch: Shown on ESPN International, ESPN360, and probably RAI. If these dont work for you, find a stream: MyP2P, Rojadirecta, Ustream, and ATDHE.net
Weather: Iffy. As I write this it is 34° F and raining lightly. The daytime forecast is for a mixture of snow and rain with a high of 39° F dropping down to 36° F by 9pm. Right now it seems like everything should be ok but you never know.

I did all the previous meeting stats and highlights in my last preview for this match. I suppose I could cut and paste them here but it is probably just as easy for those who want to know to go check them out. I will remind, you, though, that the last time we played in Parma it was to clinch our 16th scudetto (now you all remember, dont you).

Francesco Guidolin's squad is a bit different this time around. He has called up 19 players:

Our old friend Luis Jimenez (aka Stable Boy) is one of the new faces on the Parma team. As I recall, people seemed to like him here on the offside. I never thought he was all that fabulous. I mean, he had a couple good games which hinted at potential but none of that ever came to fruition. He may be a little distracted right now, though, as he and his wife are having triplets! Yikes.

Hernan Crespo has also made the switch but is apparently injured. Joining him on that list are Blerim Dzemaili and Damiano Zenoni. In addition, defenders Massimo Paci and Cristian Panucci are both suspended. On the up side for them, Paloschi is back which is definitely bad news for us. Now that Amoruso has gone, Paloschi and Bojinov are the team high scorers - both have 4 goals. 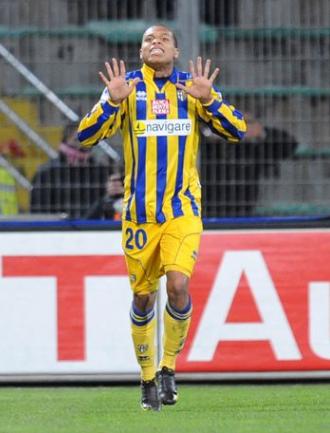 Biabiany got a great goal last week to take him up to 3 for the season. I am sure he would like to make it 4.

Parma still have some great young players on their team and I expect them to come at us with nothing to lose. As Guidolin says:

“We must have no fear, we’re not dead and buried yet. I have faith in my players and we already showed signs of improvement at Palermo. We know that we’re facing a side that can beat anyone, even in Europe, while we are going through a negative streak. I’m convinced we can put in a good performance.”

Lets just hope it isn't better than our own! 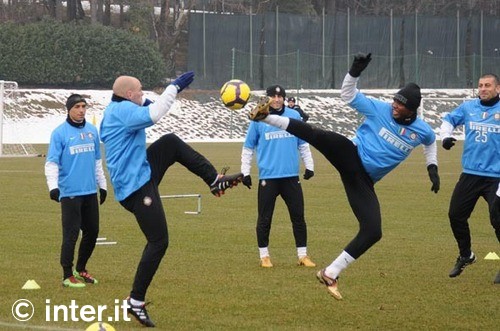 Wow, Eto'o has quite a reach.

Once again, it is all available hands on deck:

Sneijder is serving his last ban from the derby, while Stankovic and Muntari are injured. If you recall, Muntari took a wicked shot to the face during the Cagliari game. He spend the night in the hospital for observation and was cleared. He trained today with the team but I think he is sitting out this game as a precaution. Chivu, while still on the injury list, began light training today at La Pinetina.

As for lineups, I would think it would be just about the same as the Cagliari game. Unfortunately, the press conference today seemed to say otherwise. 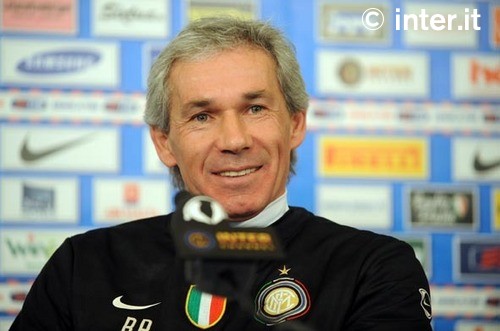 Beppe Barese vice Mou-ing it up.

As a special belated birthday gift to Mou, Beppe Baresi did the press conference today (I swear I read that somewhere). When asked about the possibility for a rotation in this match, Baresi said we would "definitely [see] something different from the previous game." Different how exactly? Beppe threw us a bone by naming four starters: Julio Cesar, Maicon, Lucio, and Zanetti.

So I guess that could mean:

But I suppose we will see tomorrow.

Our win on Sunday allowed Inter to start the week right. Now we just have to get through Parma and Napoli and we can take a breath again. Inter has a whole week between Napli and Sampdoria - plenty of time to obsess about Chelsea coming up the week after. I think our mantra for the month definitely should be "one game at a time."

On another positive note, Inter managed to win without either Sneijder or Lucio last week. Hopefully this means that things are finally starting to click and we can actually utilize some of the that depth I have read so much about. I tell you, if we can get through this month without dropping more than 3 points we should be in a pretty great position.

Fingers crossed everyone and happy thoughts.

How about a little Deki to tide us over until he gets back from injury: