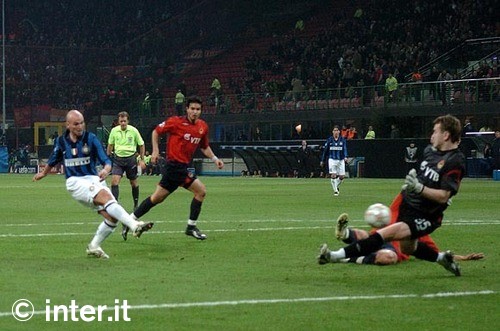 Well, we made it through to the quarter finals and once again, we have drawn the unknown entity that the Russian teams always seem to represent. They are so mysterious: the Russian Premier League is on a different schedule than Europe, their top stars dont get much press outside of Russia so no one really knows any of the players, but we all know they are potentially loaded with talent - just take a look at the Russian National team. Inter, on the other hand, are better known, at least for being an Also Ran on the European stage, and as such are the favorites to win this tie. As we all know, though, anything can happen on the pitch and no game should ever be taken for granted. Certianly, Inter want to win this game, and with a little luck, some determination, and the emotional support of the fans, we just may do it.

What: Inter v CSKA Moskva, Champions League Quarterfinal First Leg
Where: San Siro, Italy
When: Wednesday, March 31, 8:45pm local time (11:45am pacific, 2:45pm eastern)
How to Watch: FSC is showing this delayed at 2pm pacific, 5pm eastern (of course). If you want to watch it live, you can watch it PPV at UEFA.com for $9.95 or find a stream (MyP2P, Rojadirecta, Ustream, and ATDHE.net).

This is not the first time Inter has met CSKA Moscow in Champions League play. Inter entertained CSKA at the San Siro during the group stages of the 2007/8 season. That game saw Inter go two down in the first half only to see doubles from both Ibra and Cambiasso. Pazza Inter finished that game 4-2, and the tie 6-3 on aggregate. Both teams are substantially different, but there are enough similarities that the previous meeting may actually prove useful. Looking at Inter's starting lineup then, I think six could easily start again tomorrow. As for Moscow, five members of the squad that beat Sevilla a couple weeks ago were on the team Inter beat in 2007. So lets just say that while the two teams may not be familiar with each other, they are at least acquainted. Just to remind us all of what happened the last time CSKA came to town:

Gonzales and Honda are both in doubt for tomorrow's game. Honda warmed up with the team then did physiotherapy, ending up on the bench with his ankle wrapped in ice. Gonzales apparently went to a hospital in Rome for an examination.

While they have no suspensions for this game, Aldonin, Berezutski, Gonzalez, Krasic, and Odiah will miss the next leg if they are booked. 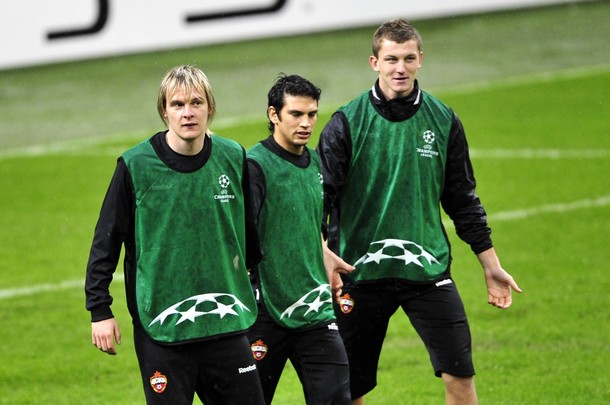 Milos Krasic (L), Mark Gonzalez (C) and Tomas Necid - Here to give all us fans a few more grey hairs.

The Russian Premier League has just begun so there is not much in the way of statistics right now. CSKA has only played three games (won 2, drawn 1), and only scored three goals (2 for Honda, 1 for Necid). Last season CSKA finished fifth, having scored 48 goals and conceding 30 (they finished second in the 2008/9 season which is why they are in the Champions League now. Confusing, isn't it).

In the Champions League, Milos Krasic is their high scorer with 4 goals. Promising young attacking midfielder Alan Dzagoev is their second highest scorer with three goals. Add to that the smattering of other goals from players like Necid, Aldonin, Honda, and Berezutsky, and you begin to see that Moscow are going to keep our defense quite busy.

To go with those 13 Champions League goals, though, they have conceded 12. That tells me that if we can shut down their attack, we have a good chance of scoring.

Come on boys, lets do this!

Lucio and Thiago Motta are suspended for this game. Balotelli is still deep in the shit with no end in sight. Santon is still having knee issues, and while he may be asked to play next weekend, he will watch this game from the stands. For our part, Zanetti, Maicon, and Samuel are a booking away from a suspension.

The big news for all of this is the continuing exclusion of Mario Balotelli from the squad. While no one knows for sure what went down, it seems to have come to a head around the Genoa game (remember the sick, not sick issue?) and that Mario subsequently left training without permission before the Catania game. 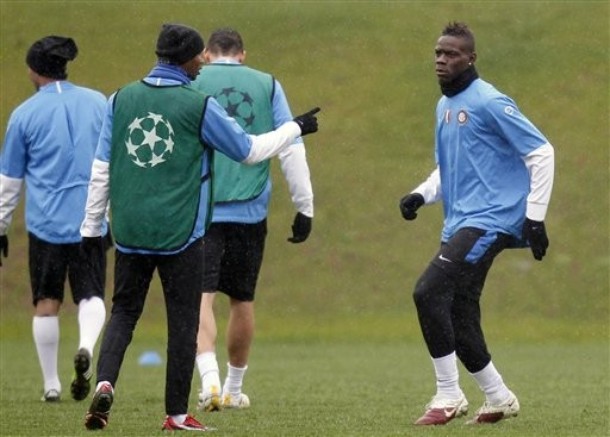 Whatever the issue is, neither side seems to be backing down any time soon. The newest twist is that Balotelli has spoken to Chiambretti Night, possibly without permission from the club, saying:

"I am not so stupid as to miss out on five games: if I had to apologize to him I would have after the first. Having reason, I will not apologize. There was not only one episode, there were many episodes, but I will speak about them later on, when everything is finished. If you are asking me to put aside my pride, you will have to ask someone else." 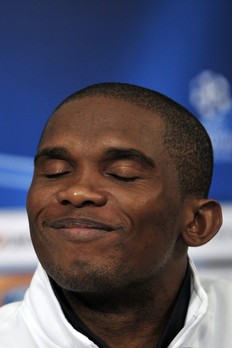 Mourinho wouldn't speak about Balotelli in the press conference today (of course). Eto'o, though, made his feelings quite clear, saying:

"You journalists have to understand that Mario has to put the team first. Mario is one of us. He's 19 and he's young. I'm ten years older than him and I have good experience. Zanetti, Materazzi and Toldo are the oldest players in our squad and these people try to speak to him. I rate him, but in this situation we have to think about the group. Mario knows what he has to do to return. We're all fond of Mario, but we won't miss him tomorrow."

I think that says it all. I just dont think this issue is Mourinho vs Balotelli. I think whatever the kid has done, he has managed to alienate a large portion of the team. Frankly, we just cant have that. I know Balotelli is a great young, home-grown talent, but he is not larger than the whole team. I would bet cash money that if Mario makes it up with the squad, Mourinho would call him up. Mou knows we are strapped and dont have the luxury of not playing talent just to make a point. Clearly there are larger issues at stake and, until Mario does his tell-all interview, we will just have to bide our time and trust in the club.

As for Mourinho, he did shed a little light onto why he is no longer doing press conferences. Today he said:

And, really, I cant blame him. This season he has already been banned any number of times, plus fined more than 67,000 euro this season, the lions share coming from the repercussions of the now infamous handcuff gesture. Rumor is that referees were prepared to go on strike if Mourinho was not severely punished. Accordingly he was given a three-game touchline ban and fined 35,000 euro. Strike avoided.

I love Mourinho and if the FIGC drive him out with their ridiculous fines and bans then Serie A will be the less for it (and I will be very disappointed and slightly disillusioned). He has not said a single thing that I wasn't thinking and the fact that he (and probably any coach) is so severely punished for speaking his mind is disconcerting. I really find that video troubling. A lot.

In any event, back to the game at hand.

Both Eto'o and Mourinho have pointed out CSKA Moscow's strong points (they are tall, quick, good at scoring, and play a tight game), and said the full support of the home fans are a must. Mourinho specifically called out Krasic as a dangerous player. I know for a time he was a transfer target for Inter (apparently Juve are also interested), but he only has eyes for Spain.

And I guess we will know if they are correct soon enough. Personally, this formation worries me without Lucio and Thiago Motta. I would much prefer to start with our more defensive 4-3-1-2 as a counter to their very fast, very attacking midfield. If it looks like we can contain them with 2, then moving into the more "top heavy" formation would be a snap. It is essential that we do not concede tomorrow so for me that means maybe we play one more in the midfield, and Milito and Eto'o up front. But then, what do I know (besides that the proposed formation makes my stomach churn).

Ok. I guess tomorrow is what we have been sucking in the Serie A for. Word is we are putting all our eggs in the Champions League basket, and if that is the case, I want to see the boys playing that way. I want to see a tight team, focused, and determined to make it to the semi finals. If everyone plays like they can, with will and intelligence, then we might just have a shot.

Happy thoughts, everyone, moonbeams and roses and rainbow unicorns.