Share All sharing options for: Inter Escape Unscathed from the Injury Russian Roulette of International Friendlies 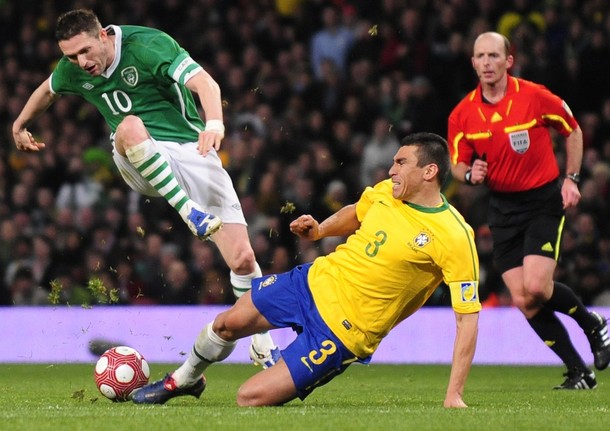 I hate International friendlies. They always seem to pop up at an inopportune time in Inter's fixture schedule and they paralyze me with fear that someone will pick up a terrible injury. Now it is one thing to go all out for a qualifier, world cup or otherwise, but for a friendly - that just seems crazy. I know, many of these games are auditions for World Cup squads, but damn it, we have games coming up - important games - and half our first team plays for their respective national teams. It just would have been nice for the whole squad to have a couple days off for a change. Oh well, at least no one got hurt.

Inter had 13 first-team members out with their respective national teams. For the most part, they all did pretty well with all but Muntari's Ghana and Eto'o's Cameroon winning their fixtures. All but Milito played at least a half (Milito didn't play at all), and most played at 70 minutes or more. Arna, Muntari, and Pandev got goals; Julio Cesar, Maicon, Lucio, and Samuel kept clean sheets; and Wesley Sneijder introduced himself to fans of the US National Team. All and all, it was a good showing by Inter players. Best yet, they are all on their way home to Milan, safe and sound. Whew. 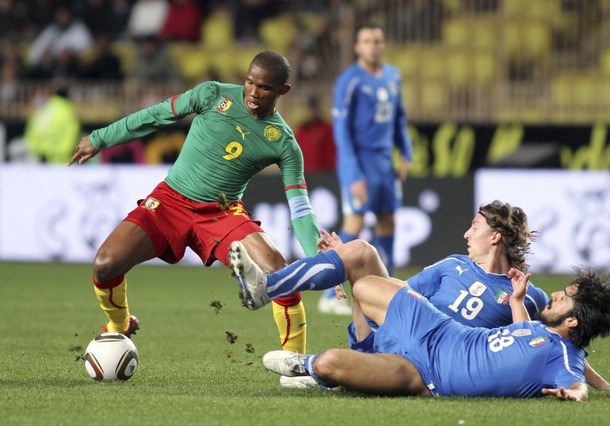 Couldn't watch the game, I have no idea how he played... Anyone?

Samuel Eto'o (Cameroon): Cameroon v Italy. This ended goalless, but Eto'o played a full 90. I have no idea if this was a good or bad game for Samu. So far, my only experience with Eto'o and his national team is that when he goes away to play with them, he comes back a shell of his former self. That team just seems to suck all the good right out of him. Of course, his drop in form may just have been a coincidence... yep, I am sure that is the case. You just wait, he will come back and score a corker against Genoa... (and I like to call it positive thinking; denial just sounds so dysfunctional).

Lucio had me worried a couple times in this game.

Julio Cesar, Maicon, Lucio (Brazil): Brazil v Rep.Ireland. Julio Cesar played the full game while Lucio and Maicon played 82 and 84 minutes. Brazil beat Northern Ireland 2-0, note JC's lovely snow white sheet. Lucio went down a couple times in this game which just about gave me a heart attack. I mean, at this stage, what does Brazil have to prove? Couldn't he just have stepped it down a snitch? And what about Maicon. He says he never gets tired. Maybe next time he "crosses" a ball into the stands someone could remind him of that. Oh, and the swelling around JC's eyes is almost completely gone. I bet this is the last time for a long time that Susana leaves him alone with a sports car.

Rene Krhin (Slovenia): Slovenia v Qatar. Krhin only saw 15 minutes of this game, but the fact that he is a full international at his age speaks volumes about his talent. Slovenia smashed Quatar 4-1. 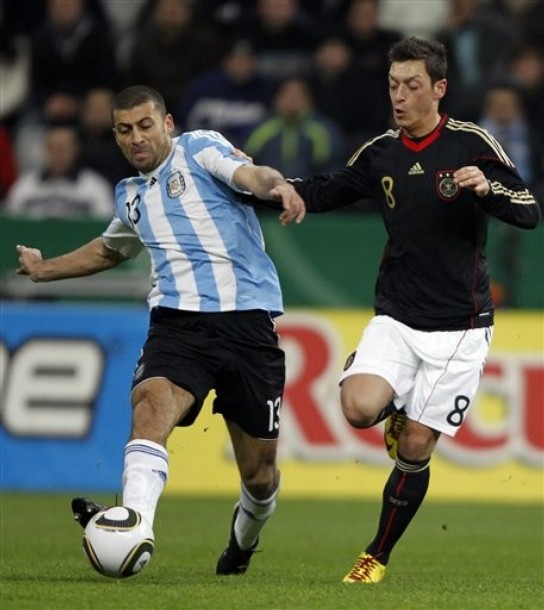 I am glad Samuel is back on Maradona's list but I am crushed for Zanetti. I will never forgive the little coke fiend if he doesn't bring JZ to South Africa.

Diego Milito and Walter Samuel (Argentina): Germany v Argentina. Samuel played a full 90 in Argentina's win over Germany. My heart was briefly in my stomach as I scrolled though photos today and saw a defender being stretchered off. A huge sigh of relief, though, as I saw it was Demichelis. Terrible for him and Bayern Munich but lucky for us (it is a cheekbone injury requiring surgery). Nico Burdisso took over for Demichelis and finished the game. Technically, Nico is still owned by Inter (just saying, he counts). Milito warmed the bench and I cant say I am too upset. Milito has been run ragged and we have some pretty important games coming up - games where we could really use a couple of his goals. A day off may be just what he needed. 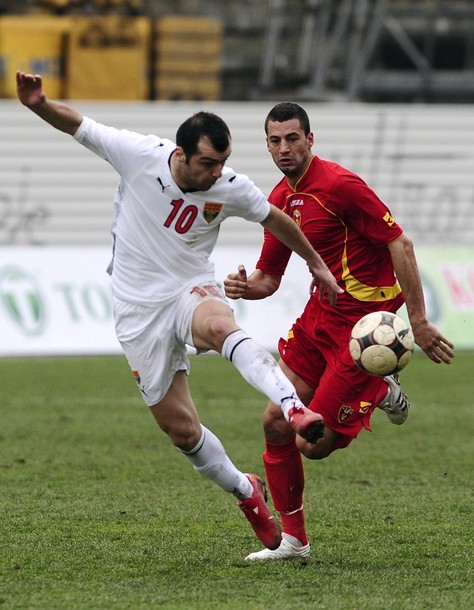 Goran Pandev (Macedonia): Macedonia v Montenegro. Pandev played 75 minutes for Macedonia and scored the second goal in their 2-1 win over Montenegro. Good job, Pandev. (Just wondering, does he have a nickname yet?) 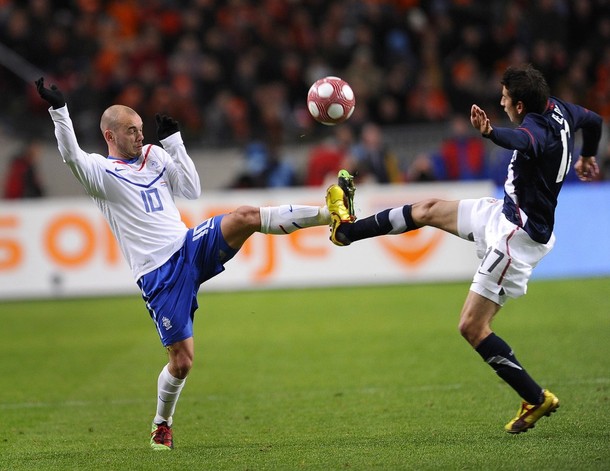 Wesley Sneijder (Holland): Holland v USA. Sneijder was the stand-out player in this game. He played a full 90 in Holland's 2-1 win over the USA. He didn't score, but was involved in just about every single Holland play - he was everywhere. I hope he still has some legs left for Genoa. Still, given that the last time he went to play for the Netherlands he came back unable to play, a little tiredness is nothing. 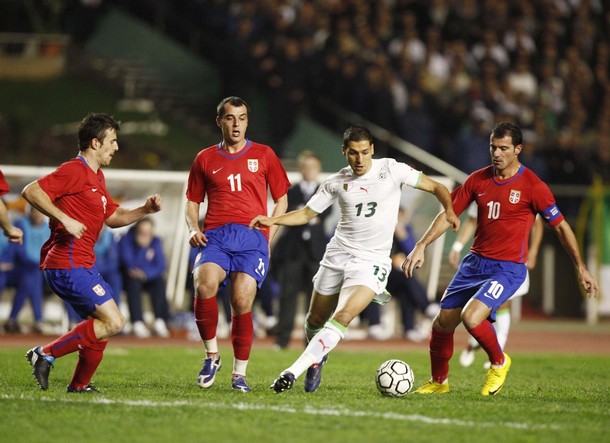 I am glad he got to contribute but they didn't make him play a full game.

Dejan Stankovic (Serbia): Algeria v Serbia. Deki played a half in Serbia's 3-0 win over Algeria. At least he didn't have to play a full 90. Right now, he needs a little rest more than a run out with his national team 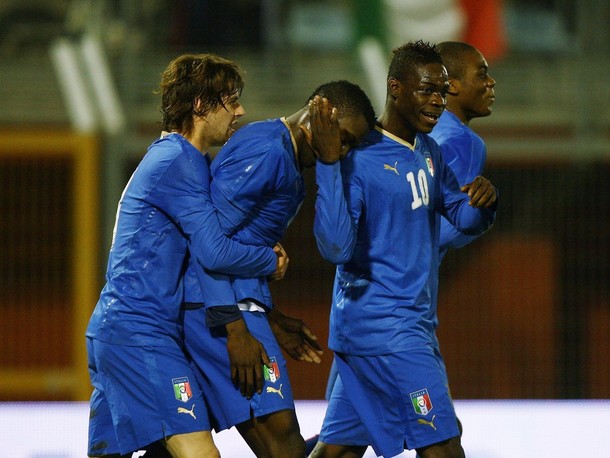 I love this photo. The face of Italy is changing and there is nothing small-minded people can do about it.

Mario Balotelli (Italy Under-21): Italy v Hungary. Mario played 89 minutes in the Azzurrini's 2-0 win over Hungary. Even better, he did not pick up a single card (!). Casiraghi even had good things to say about Balotelli's performance. Better and better. Not that there weren't cards flying around - both teams had a player sent off. For the Azzurrini it was our old friend Bolzoni. I am actually quite proud of Balotelli for this performance. This game was an important qualifier for the U21 team. Balo kept it together and didn't let his temper get the better of him. He is learning... bit by bit... game by game. It may not be happening as quickly as some of us would like, but he is progressing. For a great look into the psyche of our enfant terrible check out his interview in Le Iene. It is in Italian but still worth it.

Ok. So dont forget we have a game this weekend and it is the evening one for a change. No 6am this Sunday (hooray!). Also, I have noticed that many of you have your own Inter-themed blogs. In an attempt to build community and share the love, I would like to collect a list of all of them and post them up here. If you have a blog - or know of a good blog - send me the URL and a brief description (like a sentence or two). I will make a bibliography of sorts and post it up here and we can all wallow in our Inter fandom. Send them to: johonnars [at sign] gmail [dot] com.