Lazio v Inter: Where the Rubber Hits the Road

Share All sharing options for: Lazio v Inter: Where the Rubber Hits the Road 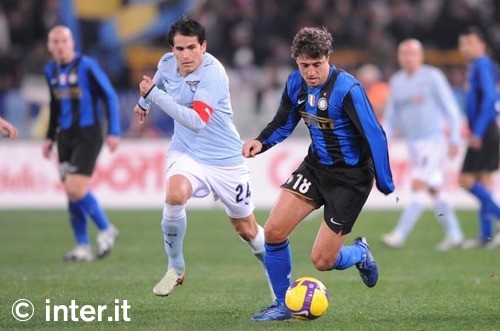 Now is when we see if all this talk of the treble has any legs at all. As we head into the last few weeks of the season, every game is a test of our determination. No mater what some Lazio fans are thinking about the game, I dont believe for one single second that Lazio will (or would) roll over for Inter, or any team in any circumstance. Roma have gotten their result, now we have to go get ours.

What: Lazio v Inter
Where: Stadio Olimpico, Rome
When: Sunday, May 2, 8:45pm local time (11:45am pacific, 2:45pm eastern)
How to Watch: Live on Fox Soccer Channel or you can find a stream: MyP2P, Rojadirecta, Ustream, and ATDHE.net

Join me here for a live blog beginning 10 minutes before the game.

Historically speaking, Lazio plays pretty well at the Olimpico against Inter: they have beat us 22 times, while Inter have only won 17. A further 28 matches ended in draws. Last year, this fixture ended 0-3 after some poor officiating from the linesmen and a Lazio own goal.

The highlights from that meeting:

Lazio have not had the best of seasons. Currently, they sit just fifth from the bottom with 40 points - only 6 above Atalanta and the dreaded drop into Serie B. Interestingly, their home form is actually a snidge worse than when they play away. Lazio have only won 4 home games and scored 16 goals at the Olimpico this season. They have done a little better in the last couple months, taking 14 points from 9 games (really, it was much worse before).

Part of Lazio's woes this season is without a doubt due to their insane owner Claudio Lotito. For some reason he has systematically run the club into the ground predominantly by benching some of the team's most talented players. He is the personification of the adage "cutting your nose to spite your face." Of course, Inter has profited by this nuttiness in that Pandev finally won his release and fled into our open arms this winter.

Reja is suspended for this game but has called up a full roster of players:

Lazio are dealing with a huge injury list but seem to have recovered Floccari, Lazio's most prolific striker (7 goals so far). Ledesma is suspended, but Rocchi is no slouch (5 goals). Our old friend Julio Cruz has not been called up so there will be no emotional reunion (which is GREAT because I still have feelings for Cruz and it would break my heart to see him score against Inter and celebrate).

Mourinho has not minced words, coming out and saying again how much he would like to coach Kolarov (although he did not say he would like to bring the boy to Inter - worrying) and that the only thing standing in Kolarov's path to greatness is the price tag Lotito has placed on this card. He is a great player and one I would love to see come to Inter this summer. There are definitely some good players on that call-up list and Lazio have the talent to take points from Inter if we dont keep our wits about us. 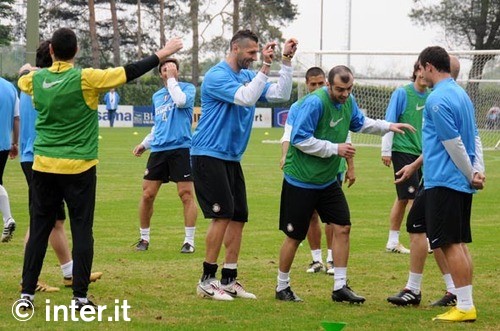 Mourinho is playing things close to his chest - he has called up every available player to go to Rome:

There was some speculation that Pandev would not recover in time, but he was at least on the plane. We shall see if he makes it to the pitch tomorrow or not. Balotelli, though, is ready to take his place in the line-up. It looks like he has made up with the squad and fans, according to his evil agent, though, his relationship with Mou is still firmly on the rocks. Still, Mario seems likely to play tomorrow, especially given that Inter have the big Coppa final midweek. Santon, poor boy, is injured. This has just not been his season. Still, he is young and that bright future will wait a year for him.

La Gazzetta thinks Mou will play his favored 4-2-3-1 with no turnover:

I am not so sure, though. I wonder if Chivu and Thiago Motta wont start. I suppose we will all have to wait and see. 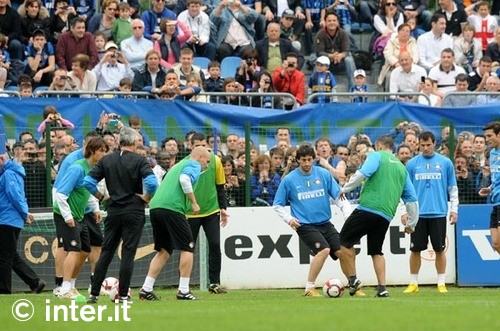 Oh how I wish I could have been there today. Next trip will be the pilgrimage to the training grounds.

The gates of the Centro Sportivo Angelo Moratti were open today for the May Day holiday and 3000 fans came to watch the team practice. Everyone is in high spirits, and although we have not won a single thing yet (and may finish the year that way), I feel like this has been a successful season none the less:

- We have beaten Milan ever time we have played them this season (always a great thing).
- We have shown that we can compete in Europe by knocking out two of the early favorites to win the UCL.
- We showed Zlatan once and for all that we are better off without him (and now even I can get behind that sentiment)
- We have united as a team and shown the world what great heart our players have.

Now, if only we hadn't dropped all those points this spring. Oh well, woulda coulda shoulda. There is everything left to play for and this way, things are more exciting, no?

I know everyone is exhausted. Still, this is what great teams do, if we want to wear the label, we have to walk the walk. That means playing at the highest level every three days and generally kicking butt. I think we can do it. What's more, I think we will do it.

I wonder if this means that the Deki-Chivu-Marco thing is on the skids.