Siena v Inter: For All the Marbles

Share All sharing options for: Siena v Inter: For All the Marbles

Well, here we are, the very last game of a hotly contested season. If Inter fail to win this game, they will fail to win the scudetto. Simple as that. We have it all in the in the palm of our hands, all we need to do is close our fingers and grab it.

What: Siena v Inter - The title decider
Where: Lovely Siena, at the other Stadio Franchi
When: Sunday, May 16, 3pm local time (6am pacific, 9am eastern)
How to Watch: Live on Fox Soccer Channel or find a stream: MyP2P, Rojadirecta, Ustream, and ATDHE.net

Join me here for a liveblog during the game. Sure, 6am comes early (very very early), but every little bit helps. We need all the good mojo we can muster.

Siena is one of those tricky teams for Inter. For the past few years they have figured prominently in our Scudetto celebrations. In 2007, Inter mathematically won their 15th scudetto against Siena (away) with a brace from Materazzi (oh how I miss good Materazzi).

In 2008 Inter could have won the scudetto against Siena (at home) but that self same Materazzi insisted on taking a penalty which was then saved, the game ended in a draw and the championship went down to the wire.

Last year, the night before the Siena game (at home) Milan's loss meant that Inter had mathematically secured their 17th Scudetto. In the end, the game was a celebration for Inter - Siena didn't really put up much of a fight, and the boys, as hung over as they were, managed to pull a 3-0 win.

This year, things are not so rosy. This is an all or nothing situation (no do-overs, no takey-backies) - we either win and win big, or fail to win and see the scudetto go to Roma. 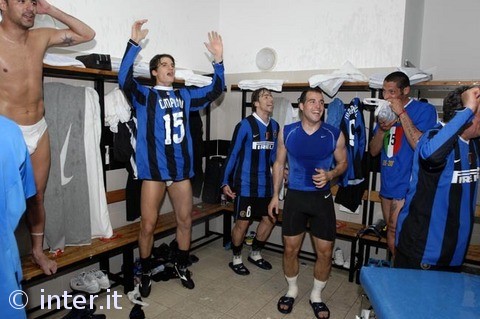 We have done this before, we can do it again.

Aside from being intimately embroiled in our scudetto hunts, they are generally sort of a tricky team for inter. We have managed to beat them at the Franchi these last few years, but it hasn't been easy. Last year this tie finished 1-2 with a brace from Maicon. The second goal was incorrectly allowed to stand (Maicon was offside), though. The year before was close as well (2-3) with only an Ibra penalty to bring home the win. In fact, only twice have Inter come away from Siena with a clean sheet: in 2006 the game ended 0-0 and in 2003, 0-1. Basically, Siena can (and probably will) make our lives difficult this Sunday. One thing I am absolutely positive of: they will make us sweat.

Last season we traveled to Siena right before the Christmas break. Mou was still new, and for me, his celebrations with Maicon endeared him to me more than any trophy ever could. After that, I knew he suffered with us fans. I like that. The highlights:

Well, first off, they are relegated. No matter what the outcome of the match, Siena is going down. They have only won four of their home games (drawn an additional 7) and have only scored 17 goals. Still at home their defensive record is not so bad - well, mid table at least- as they have only allowed 24 goals. To put it into perspective, that is four more than Milan (20) but two less than Juventus (26).

Offensively, the big name in Siena is Massimo Maccarone. He has scored 12 goals so far for them, and I wouldn't put it past him to pick up another tomorrow. Other players to watch out for are Calaiò (8 goals), Ghezzal (6 goals), and Vergassola (5 goals).

La Gazzetta thinks he will play a 4-1-4-1, the same formation that gave us such fits when they visited the San Siro:

Mourinho has called up everyone -even the injured Santon and Cordoba. Mourinho's recent comments shed a little light on the call-up, he said:

“I think everybody must be together now. I think this is important, when you go to the big moments where it's very difficult. Everybody must trust everybody around them. We are living a crucial moment of the season, everything in two matches; we play for the two most important trophies, the championship and the Champions League,” 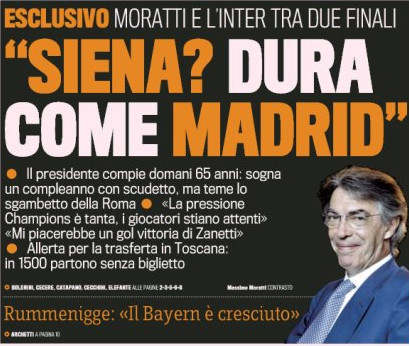 How about a win to celebrate the president's birthday?

Moratti is also worried a bit about the upcoming game. When the interviewer pointed out that this was Inter... against an already relegated Siena, Moratti was quick to point out: "Ah, but there have many Inters full of very strong players that never won. If I look back, I see champions like Ronaldo, Baggio... I cannot list them all. Yet we never won."

When he was then asked if he could choose a "man to score the goal for the Scudetto," Moratti replied:

"They all deserve it... Okay, I say Zanetti. Firstly, because his the captian and therefore represents the group. Then, because he is the oldest, even if nobody notices ... Every year that passes he improves so instead of getting older, he gets younger... [and] I was sorry that he was cut by Maradona, I know that Javier is still upset..."

If that doesn't pull at your heart strings, I dont know what will. 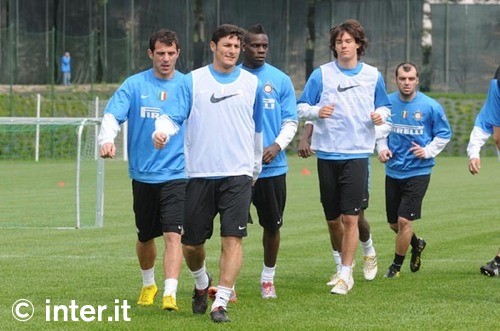 It is all about you, now, boys.

Ok, so this is it. This is what it all comes down to, 3330 minutes of game play, blood, sweat, tears, injures, and countless miles of running. I know it is hard to tear your focus away from the CL final, but this game is just as important and I want this scudetto. I want it for Zanetti and Cambiasso who have cruelly seen what may be their last chance at a world cup stripped from them (through no fault of their own). I want this for Cordoba and Materazzi, two of Inter's heros who chose to stay and fight, even if their roles were greatly diminished. I want this for the new guys, Lucio, Sneijder, Milito, and Thiago Motta, as a reward for their trust in Inter. I want this for Mourinho who has almost had to physically drag this team to the top of the table through force of will alone; he has fought the good fight this season and he deserves to win for it. Most of all, though, I want this for myself; each of these wins is one more swipe, wiping away all those years of heartbreak and loss.

We can do this. We can win on Sunday. We can take home the scudetto and keep the dream alive.

A little something to remind us what we are fighting for: