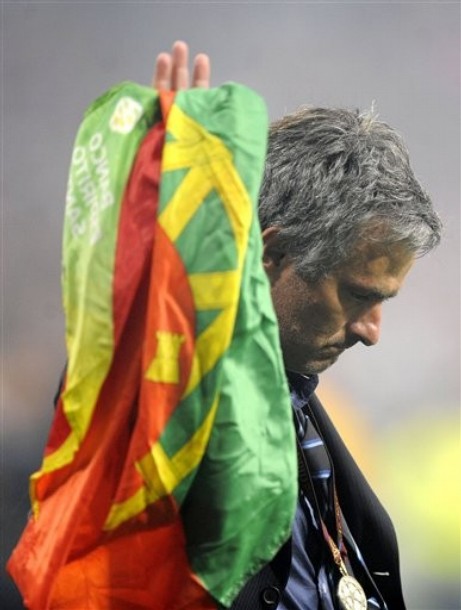 Well, it is all but official, Jose Mourinho has left the building. Pelligrini has been given the sack, all that is left now is for Inter and Real Madrid to negotiate Mourinho's exit clause. We all knew it was coming, but it hurts just the same.

As for what happens now, it is anyone's guess. The air is rife with rumors: some say that Moratti and Mou had a handshake deal that Inter would wave the 16 million euro buy-out clause if Mou won the Champions League. Other say that Moratti has proposed a deal that Real get Mou, Maicon, and Quaresma for 35 million euro (the stumbling block there seems to be that Real doesn't want poor Ricky). The one thing that seems clear, though, is that Real Madrid doesn't want to pay the clause.

So the negotiations continue and the hunt for Inter's new coach begins.

On that front, the only hint Moratti has given was a quick quote from today's La Gazzetta dello Sport: "It would be a mistake to search for another Mourinho because it does not exist. We should address ourselves to a figure of undoubted quality. It will not be a choice of friendship "

Jose did great things for this club and I will always be grateful for that. I know people call him the ultimate mercenary, but what we had together sure felt real.