Share All sharing options for: Muntari Goes the Way of Anelka -- Sorta 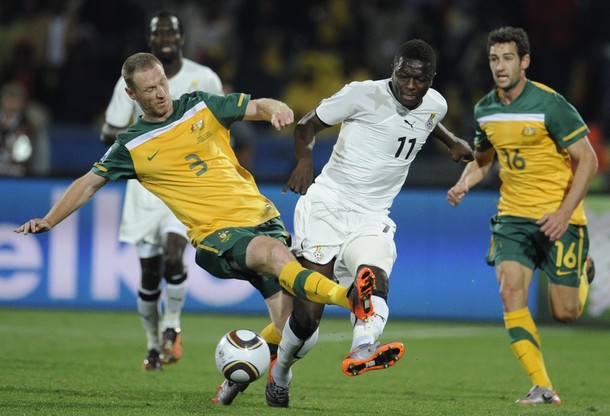 It seems that Sulley Muntari has found himself in hot water, much like France's Anelka.

Reports from South Africa are that Muntari was not at all happy with the level of participation he had in Ghana's 1-1 draw with Australia. Apparently he "stormed off" after the game and confronted Ghana coach Milovan Rajevac on the team bus. Rajevac did not take kindly to this treatment and asked the Ghanaian FA to relieve Muntari of his international duty and send him home. Despite the intervention of Senior Ghana FA officials including president Kwasi Nyantekyie and captain Stephen Appiah, Rajevac looked to not back down and for a while, it seemed Muntari would in fact be sent home. This is not the first time that Muntari has not seen eye to eye with Rajevac: he was left home from the Africa Cup of Nations due to personality clashes and there was an issue earlier in the WC campaign when Muntari sought medical attention without first checking with the team doctors.

Recently, though, it seems that Muntari will only be reprimanded. The Ghanaian Football Association said:

"We wish to state that Sulley Muntari reacted angrily and in a manner that was offensive to the team's code of conduct in the aftermath of Ghana's game against Australia," the GFA said in a statement. He was accordingly reprimanded for his behaviour with the player explaining that his actions were borne out of his frustration by the team's inability to record a win."

These new reports say that Muntari apologized to the coach after the intervention of team captain Appiah and "four other senior players."

So, my question is: Was Muntari right to express his opinion to an arguably under performing coach? Or should he just shut up and do what he is told?
Follow up: Should coaches send home players who question their authority?

I am torn. I understand that the hierarchy must be maintained and for a team to function, there can be only one head, but if the head is wrong and stupid and you know they are wrong and stupid, I think you have a responsibility to express your opinion. Of course, the real problem is with the way he handled the situation. He should have waited for a quite moment and calmly expressed his concerns without any expletives or raised voices, but I can understand how, in the heat of the moment, you might lose your cool.

I could go either way on this.

Muntari sent a press release to GhanaCelebrities.com in which he denies any wrong-doing and asks all of Ghana to support him. Here is what is reported to be the unedited release:

First of all I want to say that, I respect the coach’s decision totally, and as a member of the Ghana Black Stars, will serve mother Ghana and die a little to raise her flag high.

Whatever is going on in the media circles is untrue and I have the utmost respect for my teammates, coach, administrators and the entire team personnel.

We have a very important game ahead of us against Germany, which requires harmony and unity in order for us to advance to the next stage.

I will plead that you continue with your support, so that we stay focused on the task ahead.

So, does this change anyone's mind?