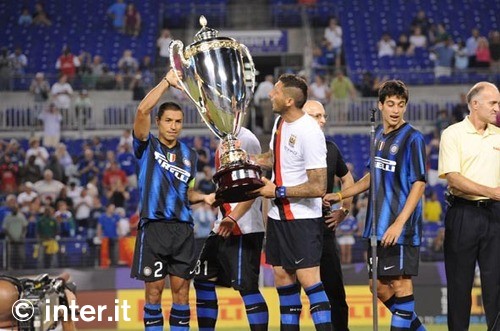 Wow. I really didn't expect that. I figured that Manchester City had all that play time under their belt and we were all new-coach clumsy and without something like 7 of our starters. It turns out, though, that we actually looked pretty ok. Sure, that is much easier to do when one of them gets sent off half way through the first half (bogusly, I might add), but still, some of those boys showed some promise. Victor Obinna (23) got a goal and a half (that second was helped a bit by a Manchester City defender) while itty bitty baby Cristiano Biraghi (17?) got an absolute screamer. Although I could not watch the game live, I was able to download it and catch up. That Coutinho may live up to the hype yet. Oh, and the best thing? Rafa gets to start his tenure out on a high note - everyone likes big shiney trophies.

For those of you who did not see the game, you can watch highlights:

Though they dont really do the game justice. You dont really get the sense that for a good part of the game, a good number of Inter players out there were Primavera players (or quite recently there of). I am pretty devoted to the team and up on who is who, but I found myself saying "wait, who is that again?" more times than I can count. Oh, and Rafa used everyone but Orlandoni.

Lineups (although the formation my have changed a bit throughout the game):

See what I mean - lots and lots of babies up there.

As for the win itself, I think having a player sent off early did wonders for making Inter look good. Sure, Vieira may have had a high arm, but I think a red was excessive - especially as it was a friendly. The scuffle that followed was downright ridiculous. Oh well, no one can say the teams weren't there to win. 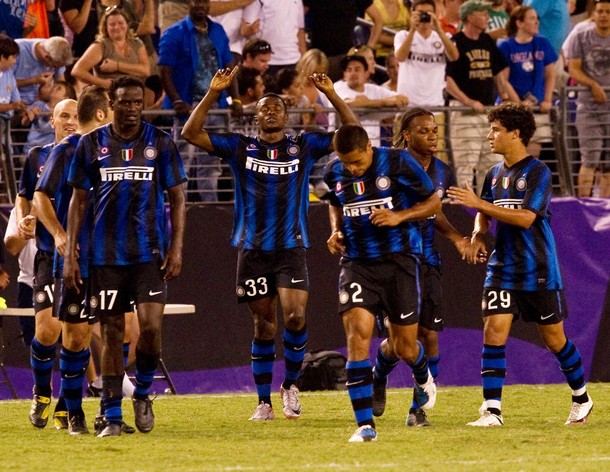 Even though there is a lot of interest from other clubs, he said he would like to stay with Inter. We shall soon see, I suppose.

Rafa had typically bland things to say about the match:

“It is always better to win, even in a friendly. We were organised, got off to a strong start and when we had the extra man knew how to take advantage of the situation.”

Before once again reminding everyone that he is only Inter's coach, not a manager, with:

“Balotelli didn’t play because he has a muscular problem. I don’t know the transfer situation, as I am only the Coach of Inter.”

In the end, I think it was a good first run out. We have two more in North America (against Panathinaikos in Toronto on the 3rd, then against FC Dallas on the 5th) before heading back to Italy for the Trofeo Tim (against Milan and Juve in Bari). That should give the team plenty of time to get ready for the first two real tests of the team, the Italian and UEFA super cups. Until then, hopefully the team can find rhythm and a winning attitude - we will need that for Athletico and Roma.

Oh, and if anyone would like to share their experience here, just send it to me at johonnars [at] gmail [dot] com. Also, pictures, if you have them. I will dutifully publish them.

You know, I was resigned to Balotelli leaving until I saw this. Now I am all verklempt again...