Share All sharing options for: 2010/11 Champions League Draw: Time to Learn Our Fate 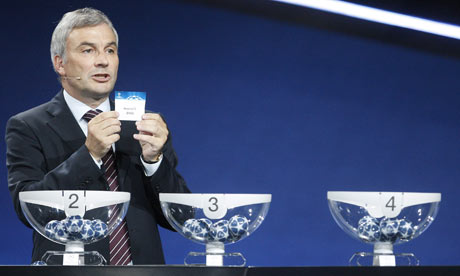 Alrighty. It is time to once again enter the European Stage with the Champions League draw (cue the choir with the theme). To fit the occasion (and because I was going to watch it anyway), I thought we could hold a little liveblog. Everyone likes the liveblog (9am pacific; noon eastern, 5pm CET). Plus, we have the added bonus of seeing which (if any) of our players pick up an award. As for the draw itself, Inter are finally seeded in Pot one along with most of the other big boys (Barca, ManU, Chelsea, Arsenal, Bayern, Milan, and OL). Funnily enough, Real Madrid is not seeded, but in Pot 2 and therefore, right now, I will make a prediction: Inter will draw Real Madrid in the group stages. Yeppers. Because it is totally a fix. The rest of our possible adversaries after the jump.

Back to the draw

so the rest of the teams are placed into 3 pots, and, since we cant draw someone from Italy, the possibilities go like this:

I feel that it is inevitable that Inter will draw Real Madrid. As for the others, I would like to avoid Russia and keep the traveling down to a minimum. So, who do you hope we get?

I think we have a pretty good chance of taking home three of these Club Football Awards.

Ok. So join me here for the liveblog (the box above) and we will watch the draw together.