Share All sharing options for: Napoli 0 – Inter 0 aet. (4-5); Coppa Italia, Froggy Rots on the Bench and Pazzo to Pazza 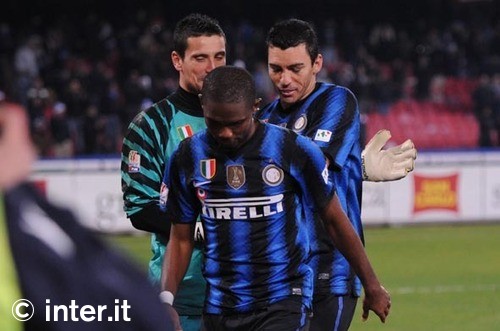 Another Coppa Italia game has come and gone. It was a good fight by both clubs who were trying to in the game. During the LiveBlog I mentioned that our boys were giving about as good as they were getting despite the injuries, match congestion and the hostile environment.

Inter hadn’t won at Napoli in 13 years, part of that stat is inflated because of Napoli’s financial troubles and relegation for a few years. The other part is that Napoli is a hard place to play. Either way, during the Liveblog on Wednesday, before extra time, I made the comment that Inter might lose the game but they wouldn’t have been beaten. I stand by that statement. The boys fought up to the end and gave themselves a chance to go home and get ready for the next round, instead of just going home…

Player of the Game… I was hard on him during the game because I think he needs to be more assertive and aggressive, especially in the small 6 meter box but Luca came through for us with a number of very good saves. 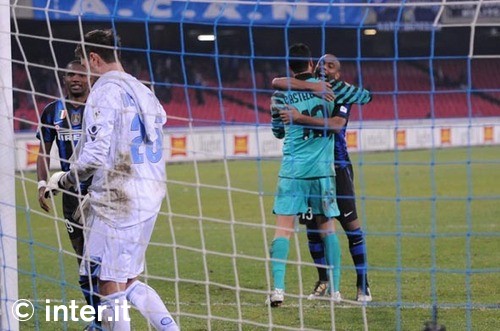 Castellazzi: As I said I wish he would get off his line quicker – or at all at times, but he saved our fat at least twice. 8.0

Maicon: At times he was Inter’s only way to link the attack with the back 7. He was very competent in defence although he was caught up a couple of times. 7.0

Ranocchia: Clearly I was seeing a hologram on the field, because this kid never plays, right? Well, whoever it was played very well. This person also saved our fat on one occasion, seamlessly backing up Castellazzi and heading the ball off the line. He also made numerous tackles and was very dominant in the air. 7.0

Cordoba: I thought Cordoba played very well in the first half of the game. He looked more cautious because of the kid back there, I am sure. In the second half he looked more reckless as evidenced by the sneaky little shove in the back of a Napoli player. 6.0

Chivu: Playing Chivu is a double edged sword. When he stays back to defend – which he does moderately well – you have to play someone in front of him (Eto’o) to account for the zone on the left in front of the half way line. He missed an open chance on goal in play but sunk the winning penalty which surprised some people (the man played for Ajax for heavens sake, he’s technically good). 6.0

Zanetti: Javier played well and was solid. I thought that he faded a bit in the second half. 6.5

Cambiasso: Like Javier, he looked like he faded quite a bit at the end. He was incredible to get in a position to receive Maicon’s cross and very unlucky to hit it right to De Sanctis who was left high and dry by the defense. 6.5

Motta: I liked a lot of what Motta did on Wednesday. He was probably the best passer we had on the field and switching with Cambiasso to stay back and direct the ball was a stroke of intelligence. 7.0

Deki: Deki does a lot of things well and that makes him valuable, but I don’t think that he particularly great Wednesday. Without him we miss the threat of a long shot that draws the defense out though. 6.5

Eto’o: Ugh. I didn’t like his game. I thought he looked tired and when he sits back in the midfield to switch with Pandev and Deki we lose out, in my opinion. 5.5

Pandev: I don’t think I have read anything in the last two days that disagrees with the notion that Pandev was terrible on Wednesday. I am withholding vitriol because I think he was played out of position. Pandev isn’t a striker – which is where he played a lot on Wednesday. He’s a support forward or wide-ish type. 4.5

Highlights for the Masochistic

I am including a moviola for 2 reasons. First, there were at least 2 questionable calls and second I am writing this late enough so that I have had a chance to see/read some media outlets to get more than one opinion.

The first incident was the offside call on Cavani. At the time on the Liveblog I thought that he was even with the ball and the linesmen made the wrong call although it was bloody close. I have since read that others saw him centimeters off. Now I don’t think that the linesmen saw it that close – I DO think that the linesman was to Cavani’s back (the right side of the field looking at our own goal, or opposite side of the field from the ball) and only saw that Cavani was past the defense, which he was, and I think that the linesman didn’t see any of the ball in front of Cavani, either. Either way, it was a tight call.

Cordoba should have gotten a caution and Napoli should have gotten a free kick just outside the penalty area, but in realty no ref is going to make that call. The Napoli player was in a crowd of blue and black shirts alone, without the ball and then went down. Everyone agrees that it should have been something according to the law, but that call never happens.

Lastly there was Lucio’s handling. This one is tricky because there is quite a bit of disagreement. Those who are advocating for a penalty say that he leaned towards the ball and that showed intent – which is absolutely correct on both accounts. He leaned in and he probably meant to hit the ball with his upper arm, no question.

However, on the other side is the fact that he held his arm against his body as much as possible and the fact that handling is not considered illegal if the arm is so positioned as it is assumed that the ball would have hit the player’s torso. Plus the proximity of the ball and the speed at which it was hit is also a factor. Lucio definitely turned into the ball, but that doesn’t necessarily make it a penalty.

Also I didn’t see it on the crappy web feed I was watching but there was a laser on Castellazzi’s face on the first penalty by Cavani. Napoli was fined 25,000 € for some fan's stupidity.

Either way, these were all close calls.

Well there were some good things to come from this game. Inter managed to hold the other team out of the net for a whole game questionable offside or no. Ranocchia, or someone who looked just like him, was used for the entire 120 minutes in about as unpleasant an environment as there is in Serie A and he played very well in a tense atmosphere. As did Castellazzi who will be called to duty a couple more times until Cesar gets back.

Some negative things from this game were the injuries of course. We were just getting back to health before we lost Milito, Deki and Cordoba to join Cesar, Samuel, Sneijder and Coutinho. Plus the attack looked very, very, very, very weak. If it weren’t for some long shots from Deki or the blast from Cuchu that was unlucky not to go in we generated very little.

This brings me to the winter signing of Pazzini and the two – that’s right I said TWO midfield signings. 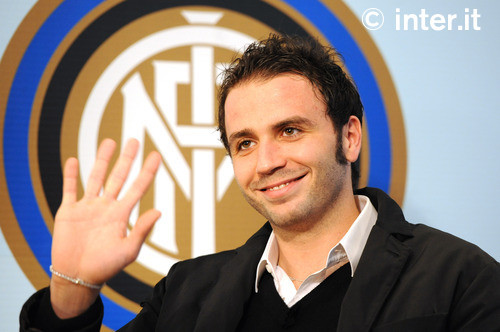 Yesterday, you might have noticed how I mentioned that Inter was in the process of signing Pazzini and Kharja. The Pazzini deal is done and dusted. It only awaits the official presentation – he’s going to wear #7 by the way. Kharja needs a medical still, I think, but that move is not yet official as far as I know.

Pazzini has been a little off form this season – he has only scored in 4 Serie A games this season, one of which was a hat trick, I think – but he has a record of being able to score when he’s given service. He’s much more like Milito than he is like Eto’o, if you haven’t seen him play. One of these days I am sure that we will get to a full bio, but suffice it to say, that there is a possibility of a third scoring option that we needed since we sold Mario for a wheelbarrow of cash. Unfortunately he picked up an ankle injury against Juventus so we are going to have to wait a week or so before he makes his debut. Pazzini is rumored to have signed a contract until June 2015.

Inter had to give up Biabiany and 12 million in cash. There were rumors that inter gave up youth product Luca Caldirola, but those proved a misunderstanding. Helping the process along was Muntari's move to Sunderland, where he currently rumored to be getting a physical. A sure sign that the process is well along... assuming no one finds any problems with his gums, of course.

But you also might have noticed that I also mentioned two Austrian midfielders that Inter had signed yesterday from Bayern Munchen. Well, today Inter made it official on the 18 year old Christoph Knasmüllner from Bayern Munich that is supposedly going right to the senior squad training grounds. Apparently he was training with the Bayern first team as well this season. The injuries to Sneijder, Deki, Nwankwo and Coutinho have also made his addition to the senior squad very important. 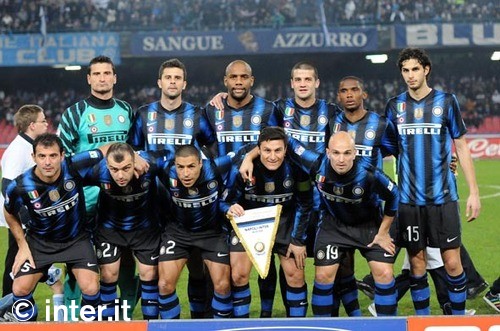