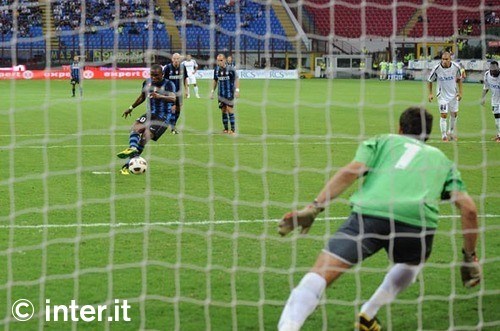 Well, I am back from my vacation and ready to watch me some football. To be clear, I had every intention of writing my blog from San Diego (where I went on vacation), but come on, it was 85 degrees out and there was a beach. And a zoo. Did I mention it was 85 and sunny out? Ya, so anyway, I didn't do a whole lot of sitting and staring at computers last week. But I am back in the 40-degree drizzle and dark at 4pm land so I am ready for some computer face time. And a whole lot of football. Lots. Luckily, Inter has a game this Saturday (yay) and even better, it is in the afternoon. Yipee!

What: Inter v Udinese please let us win please let us win please let us win
Where: The lovely San Siro (where you can get Ringos and airline bottles of Baileys Irish Cream from vendors instead of beer and pretzels).
When: Finally, a decent time. Saturday, December 3, 8:45pm local time (11:45am pacific, 2:45pm eastern).
How to Watch: This one is on regular TV! Live on Fox Soccer, RAI, and every other self-respecting sports outlet (like these). If that doesn't work, find a stream: Rojadirecta, Ustream, and ATDHE.net
Liveblog: Oh ya, you know it. And I will be freshly pedicured so totally in the mood.

(oh my god if I hear this iPod "Take me to your best friend's house" song one more time I may have to throw this shoe through the TV. And I really like this shoe.)

Ok. Udinese. The Bullies from Friuli. These guys are tricky: out of the 39 times we have met in Milan, Inter has only taken full points 23 times. That is better than our stats when we go to the Friuli, but really not fantabulous. And now, given our relative positions on the the table (ouch - best not to look), I have my doubts. We managed to beat them last season, thanks to strikes for Lucio (out with injury) and Eto'o (gone to Russia). Yikes.

Udinese is doing really well this season. They have only lost two games and are tied for second place with Milan. They even have a positive goal differential (remember when we used to have that as well? Happy times, happy times). They are coming off a mixed bag, with a draw against Rennes in the Europa League most recently, a win over Roma before that, and a loss to Parma the week before last.

No surprise, up front their big goal scorer is Mr. Tony Christmas (Antonio Di Natale). With 9 goals, he is responsible for 60% of Udinese's goals (the rest are shared with Bašta, Isla, Domizzi, and Benatia). Just as crucial for Udinese's good showings is their keeper, Handanovic. I have always liked him and with 8 clean sheets so far this season, he is shaping up to be a pretty good keeper. Wow, who would of thought: good offence and good defence gets you second/third place in the table.

As for lineups, Udinese has no disqualified players but Barreto, Abdi, Bomizzi, and Coda are injured... or at least, injured-ish. Some of them may pass a late fitness test and be available. Right now, though, La Gazzetta is thinking:

Which is similar but not quite the winning sqad from the Roma game. The big change would be Ferronetti. He has only started three games this season, so I wonder where LG is getting their intel. In any event, Udinese can go either way. They played midweek (0-0 draw with Rennes in the EL), something the squad may not be accustomed to, so they may be a little tired this weekend. At least, that would be my hope. We need all the lucky breaks we can scrape up at this point. 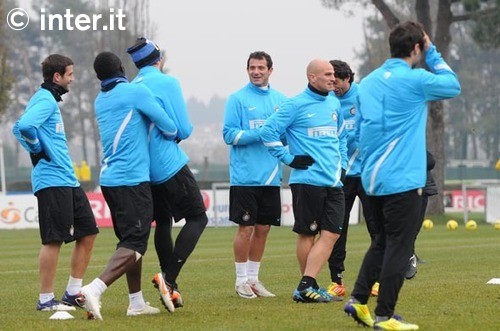 Everybody grab a Pazzini and head on out to the San Siro.

Ranieri has called up 21 players:

Muntari, Forlan, Maicon, Sneijder, and Lucio are all injured. Which is really a shame. We could use Maicon and Sneijder right about now. Forlan could be useful... or not. Who can say, really. Lucio is another enigma. He was pretty skippy but now, I just dont know. The projected lineup (from La Gazzetta dello Sport) for this game is also a little wacky - but I dont know a darn thing about lineups or tactics. I will say it looks static on paper (er... or on the screen). Well, see for yourself:

Nagatomo is hit and miss. He has been pretty ok, but then sometimes he just loses his marbles completely and gets caught waaaaay out of position. And what about Coutinho and/or Castaignos? You would think that one of them had earned a start over Deki (I love you, Dejan, but you aren't getting any younger... or faster). But like I say, what do I know?

CR didn't have anything all that interesting to say* in today's presser (oh god how I miss Mou). Basically, just that Udinese are a good team, a fast team, with a great academy and that this will be our toughest test yet. Of course, he also said that he liked the way the team played against Siena, something I dont really agree with. Then there was the usual "the team is grown and and I am confident" sound bite that every coach of a bottom table team that really should be a top table team says. I have to say, in the end, he doesn't sound all that confident (or excited). If only he had a little charisma... if only...

* looks like Inter are now streaming these pressers live on Youtube. Not so handy for people like me who are 9 hours different from Italy but some of you may want to tune it.

Oh, and as an aside, look who showed up at La Pinetina today.... Julio Cruz ♥♥♥♥! I know he aged out of the game but I still have a soft spot for him. He just had this way about him - everything looked so easy, so elegant. It is nice to see him again and I hope he is doing well.

See, now dont you feel all warm and fuzzy inside? But back to the game at hand.

I would be cautiously optimistic but I just dont know. Udinese are good. Inter has been not so much this season. I think this whole thing will hinge on 1) if our youngsters play and 2) how well they play. If they dont play at all, we are in the poop. If they do play but suck it up all over the field, we are in the poop. And it is sort of scary to put all our hopes on these kids.

Wow, look at this! A preview for the game and everything. If they keep posting these, you all wont need me at all any more.