Mercato Madness - It's All Over But The Playin'

Share All sharing options for: Mercato Madness - It's All Over But The Playin' 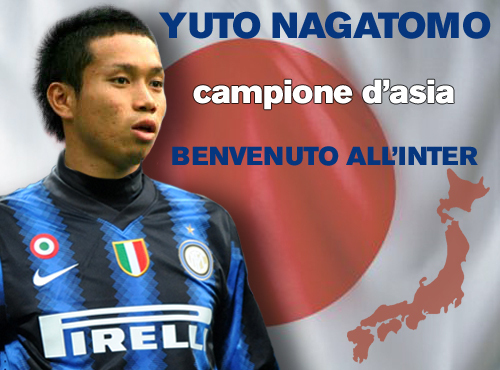 So after Branca told everyone that Ranocchia would be our sole winter market purchase, he went back out and rustled Inter up a striker for now (and one for later), another defender, and a midfielder. All that, plus a whole host of movements in the youth division and more deadwood got trimmed. It has been a busy week, alright, but was it busy enough? Now is your chance to play pundit and rate Inter's market. What fun!

This was a surprisingly busy market month for Inter. Really. I mean, after this summer and Branca saying that Inter fans had to learn to see the glass as half full, I though that Ranocchia would definetly be all the incoming we would see until June. And then the mercato hit the fan. All told, Inter took six new players and sent four out into the world. And, if one believes La Gazzetta dello Sport, all for a profit.

Giampaolo Pazzini (Sampdoria) 12 million + Biabany. This was our winter big ticket item. So far, I like what I see. Too bad he cant help out in the Champions League.

Houssine Kharja (Genoa) on loan with right of purchase for 4.5 million. Also, so far so good.

Andrea Ranocchia (Genoa) Lots. 19 million euro in total, but only 12.5 this winter and, if they take Destro, it could be cut down to 12.5 million total (Destro is worth 6.5 million). Really, how did we ever live without him?

Yuto Nagatomo (Cesena) on loan for 2 million with right of purchase for another 4 million. Alright, I wont lie, this guy is completely new to me. Some of you are quite excited by this, so I will take your word for it.

Christoph Knasmullner (Bayern Munic) sale, for the Primavera team but transitioning to first team. He trained with Bayern's first team and is apparently quite the hot prospect.

Lukas Spendlhofer (AKA St. Polten) sale, for the Primavera team. I dont know much about this guy. Anyone?

Luc Castaignos (Feyenoord) sale, from June. Also a very hot prospect. On all sorts of pundit up and comer lists. Has anyone actually seen him play, though?

Federico Mannini (Siena) sale, for the Primavera team. Quite young. Strictly for the babies for now.

Jonathan Biabiany (Sampdoria). I get attached to players. I was starting to get attached to this guy as well. I guess that if Pazzini proves to be as decisive over the long haul as he was against Palermo, it was a no brainer. Still. Jon made a good story (young prospect picked from the Paris slums...)

Mancini (Atletico Mineiro). So long, Flipper. Dont let the door hit you on the way out.
Obiora Nwanko (Parma) partial ownership. I guess he just didn't work out. Happy trails at Parma.
(Parma also bought half of Joel Obi's card but he will be staying with Inter)

Davide Santon (Cesena) loan (sniff sniff). I think I made it pretty clear how I feel about this. I understand that, in the long run, this will be a win win situation for Inter and Davide. But it still hurts.

Muntari (Sunderland) Loan with the right of redemption. See, I always sort of liked Muntari as well. He had a lot of heart and the rest of the team loved him. Sure, sometimes he let his passion get the better of him, but better to be too hot than too cold in my book. I hope he does well in Sunderland. I wish it could have worked out better for him here at Inter.

Nelson Rivas (FC Dnipro Dnipropetrovsk) loan with the right of redemption. Please please please redeem. I dont think I could stand to see this guy back in an Inter jersey. He seems like a nice fellow, he just really isn't very good at football. Fly, little bird, fly.

Overall, I think Branca did a bang-up job this winter. I cant say if it will really be enough to catch Milan (or maybe Napoli), but I think we have a strong shot at top 3. I am a bit less optimistic about the Champions League. I think that will all depend on who is injured come game time. Most of the incoming players are entirely new to me so I have to rely on Branca's judgement (he just has to know more than I do about this).

If we are to believe the paper, when you take into account summer sales (the estivo number above), Inter actually turned a profit on the market as a whole. Which is pretty spanky. Especially considering that almost all the other teams posted an overall loss (Milan, -20.3 million euro; Napoli, -20.95; Juve, -19.95).

Of the teams who actually made money, most were pretty slim (Palermo +4.8 million euro; Sampdoria +5.4; Roma +0.85). Really, only two teams were anywhere near Inter in terms of monetary gain: Udinese (+13.3) and Catania (+13.1). Who was the big spender? Probably not one you would have guessed: Genoa. They spent 11.2 million over the summer, then an additional 22.1 this winter for a whopping -33.3 million euro. Ouch.

Against this backdrop, La Gazzetta rated Inter's market an 8 (see above), which, along with Milan (they got an 8 as well) is the highest grade they gave.

I guess the question for me is, is it better to be fiscally responsible and chasing or splashing the cash (like Milan) and be in first place? Because I think we would have been in a much different position table-wise had we opened the wallet last August. I dont know if we would have been at the top (our coach was Rafa Benitez, after all), but I think we would be much closer than we are right now.

But maybe that is a question for history to decide. Right now, we are talking winter market.

Overall, I think I give our winter market a solid 7. It probably would have been an 8 but Pazzini is cup-tied and I have no idea who this Japanese fellow is (although, I hear the club stands to make a mint off his image rights in Japan). Maybe I will feel differently after the Bari game, but this is now.

What do you think? Did Branca get the right players? If not, who should he set his sights on for June?

Rate our winter market (until midnight Wednesday) and have your say in a totally non-binding and non-reality-effecting way:

How do YOU rate Inter's winter market?online survey

If nothing else, the next couple months will be exciting.