Share All sharing options for: Serie B Champions 1 – Pazza Inter 0 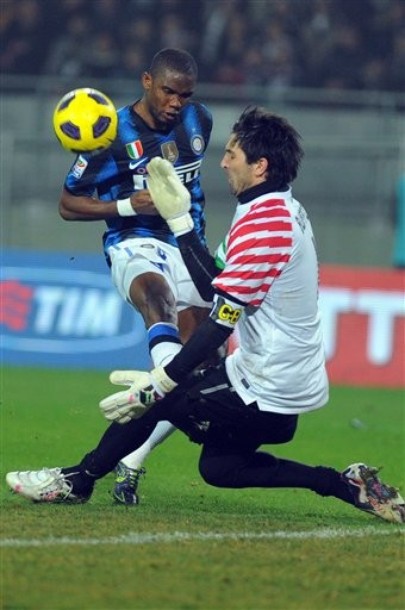 This could have been the first of his three goals on the evening.

It's never easy with this team...

When you play badly, you should expect to lose - I don’t think that I used that phrase since The Benitez Fiasco. We didn’t play well, they didn’t either particularly, but we were the ones that missed our chances.

And we did have them, just too few and without the performances that we would normally associate with the players in question. Eto’o missed 2 very good chances – one extremely unlucky to go in. Sneijder looked like he had an opening and unleashed a laser into the area only for it to bounce violently off our own guy. Pazzini hit a glorious header off a Maicon cross right to the center of Buffon’s mass.

It was a day in which nothing went right and there are going to be those days. The difference between last season and this season was that there were a lot fewer of them. Also, we were a lot more ruthless on the counter last season, but I’ll get to that later.

By the way, I would like to point out that I was the one who kept saying, "The Champions League is our goal this season..." In 4th now with Lazio, Napoli and Milan in front and in a fight with Lazio for group stage entry. Just saying.

Cesar: I can’t tell, really, if Julio could have attacked that ball to Matri on the goal. A lot broke down on that play and I think that the blame can be shared between 3 players – Cesar to blame least of all. Otherwise Cesar did just okay. 6.0

Maicon: Offensively, Maicon did his job as an option down the right wing. He made at least one very good cross that landed right on Pazzini’s melon. Defensively, Marchisio did nothing coming at him and Kharja switched and communicated with Maicon well. Also on a side note, it was great to watch Maicon and Kharja make Chielllini resort to diving because he couldn’t make his way through. I counted 7 times that Chiellini flopped over without a touch and protested the “get up” wave from the ref once he realized his passage was going to be stopped. Before this game I thought simulation was worth a caution – I guess it’s only for us. 6.5

Ranocchia: The goal was an issue as Ranocchia played Matri onsides, but that’s what happens when you are young and rushed onto the field. The offside trap is a discipline of organization and a 22 year old playing with a team for 1.5 months is going to have these issues. Otherwise, I thought that he played very well for such a high pressure game. He showed a lot of speed – that I didn’t think he had – and was very calm for most of the game. 6.0

Cordoba: I think Cordoba was the most to blame for the goal. On replays it looked like he realized he was keeping Matri onsides and then overcompensated by leaving him all alone right in front of the goal mouth. He did it again when Matri missed everything wide left. On another note I thought it amusing that Luca Toni – who looks half a body taller and must weigh at least 60? 70? pounds more than Ivan fell at every breath Cordoba took. That’s pretty good defending if you can make a guy almost twice your size fall over with the barest of every touch – odd how there were no cautions for all the diving and protesting for a call, huh. 3.5

Zanetti: Javier had a very good game as a fullback making Krasic a nonfactor in the game despite being 10 years older than him. It was just bad luck that the goal came when Zanetti had done such good work only to see the central defense fall asleep on the job. 6.0

Cambiasso: Cuchu was a ghost. I don’t know if it was the new position blues or what but he was a nonfactor – and his only shot, taken in the area and wide open went up to row H. 3.0

Motta: Probably our best midfielder – which isn’t saying much. He, at least, played like he thought it was a good idea to win. But it wasn’t on par with the Roma game, that’s for sure. 5.0

Kharja: This is his worst game since his signing. I can cut him some slack as he’s playing off to the side and back more than he’s used to – but he’s done it for a few games already and he wasn’t this bad in them. We’ll have to see if this is a one off or if it’s a sign of things to come. 3.5

Sneijder: I will give credit to Sneijder for taking a beating, late, every time he touched the ball. Sissoko got a yellow for being late and his tag team partner, Melo, should have gotten one as well. But there were too many lobs over defender’s heads for some reason. If Juve is playing 8 back and clogging the lanes, then it’s better to try and find a good look and shoot. Next time when they step up to prevent the shot, you pass in the gaps. But you have to start being dangerous in the first half; you can’t set the defense up in 30 minutes. 5.0

Eto’o: Easily the worst performance that I have ever seen from him. Eto’o has his off days like anyone else, but I have never seen him miss a 1v1 with a keeper, a rocket off the crossbar instead on in the open goal and a wiff on the volley in the ensuing attack. He had his chances - more than. The man could have had a hat trick away in Turin. 3.5

Pazzini: I am not going to kill Pazzini too much on this game. He had his chance on what looked like a great header right before it landed in the center of Buffon’s mass. He also beat the offside trap once but the flag went up anyway. He also made a great trap on a lob but the ball was slightly off where he wanted it and it was desperately cleared off. So, the service that he got, he just couldn’t put it away. Too bad that’s his whole job. 5.0

Highlights
This is the best highlight video I could find. For some reason I am having a hard time finding good highlights for this game. 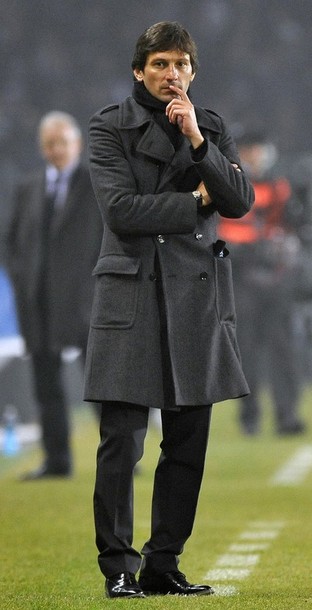 Truth be told, this game is always a snoozer for me. It’s not just because I already know – like the match officials - who is going to win. Both teams play so tight that no one really attacks, it’s just who can capitalize on mistakes. Sunday, Inter didn’t capitalize on mistakes. Juve made them too, just like Inter did. They were playing a high offsides trap to compensate for the fact that Eto’o, Sneijder and Maicon have the ability to beat Juve’s defenders if they are caught by themselves. Both Eto’o and Pazzini beat the trap. Eto’o missed a 1v1 and Pazzini shouldn’t have been called for offsides in one instance.

The real problem is that the coaches and the management won’t play against Juve the way they should. They keep pretending that this is match against a top 3 team. It might have been once and it might be again in the future if Juve can crack the Europa league ceiling without too many free penalties, like they got last season. But this season, Juve is playing for nothing and haven’t been playing particularly well at that. There was no reason to be so cautious. We just should have played forward with a good attitude and as a team enjoying their jobs like we have been doing all winter. After all, we played that way against Udinese and Napoli. And they were both much more dangerous than Juventus has been this season.

And if we are going to be cautious and play tight, then we need to be more ruthless on the transition. I have said it before and I will say it again, this team is built around the change of possession, the transition, Showtime Basketball, whatever you want to call it. We are most effective taking the ball on the turnover and launching a quick attack that has Eto’o, Milito/ Pazzini and Sneijder all moving directly to goal in waves with defenders running towards their own area. We did none of that on Sunday, despite having some opportunities to run and gun.

Another problem with playing tight and cautious is that the refs always swallow their whistles in these games. Actually in this game, it starts before kickoff - Aquilani shouldn't have even played in this game. When was the last time you watched a Serie A game and a caution wasn’t given in the first half? Especially considering the defensive nature of the two teams involved? This situation always seems to benefit Juventus as it did on Sunday. Chiellini could have been sent off twice on cautions just for diving and there was no whistle for his handling near the Juve penalty area – which could have been another caution as it was for Lucio in the Derby last season. No caution for the late tackle by Melo on Sneijder? Really? How about Sissoko grabbing Zanetti by the shirt twice and then going for his face as Zanetti motored by? The only players that we had that took advantage of the slack rules was Cordoba, who probably could have gotten a caution for shirt tugging and Motta who actually got a yellow for a late challenge. Maicon's yellow was a joke. How many folks picked up on Zanetti lecturing Matri for diving with his finger pointing in Matri’s face?

So playing tight in this kind of game isn’t worth it. One mistake too many or a call that won't go your way and Leo’s got to find a way to change the nature of the game in mid stride from the sideline with half the bench out injured. It’s far easier to slow the game down if you can get a lead than it is to pick up its speed when you are down. 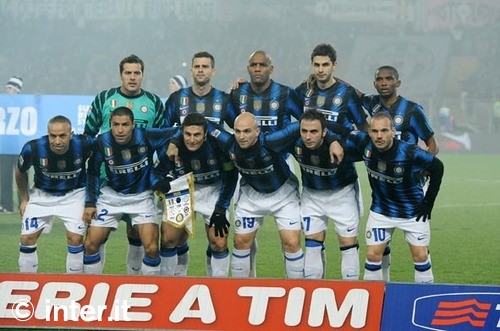