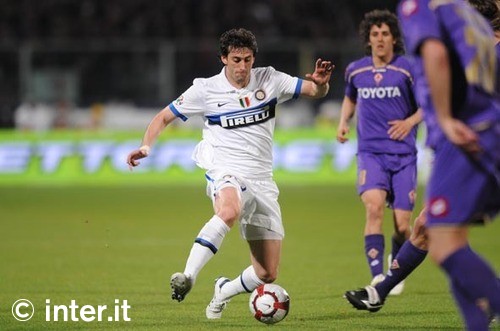 While the rest of the European footballing world will have their eyes turned toward the Champions League, Inter will be playing their second game in hand, this time against a resurgent Fiorentina. Many of us fans have been secretly counting on these points, but, if there is one thing that the Serie A has taught me, you can never count your points until you actually win them. Sure, Fiorentina were going through a rough patch, but they are feeling much better now. Inter, on the other hand, have to show they have the ability to get up, dust themselves off, and come out of last weekend's loss and get on with the business of winning.

What: Fiorentina v Inter, Day 17 makeup
Where: Stadio Atemio Franchi, Florence
When: Wednesday, February 16, 6:30pm local time (9:30am pacific, 12:30pm eastern)
How to Watch: RAI, ESPN3.com USA, Fox Soccer Plus, FoxSoccer.tv or the regular streaming places (MyP2P, Rojadirecta, Ustream, and ATDHE.me)
Liveblog: Not unless MAD pulls one out. Kirby has class and I am at work. Sorry.

Fiorentina is a good team. As such, they usually win their home games. Of the 73 times Inter has traveled to Florence for a Serie A game, we have only won 17 while Fiorentina have won 25. The other 31 games have been draws. In addition, they have outscored us by 104 goals to 82. Last year this game finished 2 all after a late Viola equalizer:

For a view of this game through Violet tinted glasses, I suggest you check out the Fiorentina board. It is a nice place filled with nice people and as such, I would ask that anyone who does make the trip to the Viola board be nice as well. Let's leave the trolling out for this one.

There are a lot of ties between the two teams these days. Frey spent some time here at Inter, while Pazzini had a few seasons in Florence. More importantly, our old friend Sinisa Mihajlovic is their coach (and he really rocks those purple scarfs!).

It is interesting to see Mutu on the list - I wonder if he will actually play against us (oh ya, he played for Inter as well). Frey, Jovetic, Koldrup (last year's hero), and Vargas are all still injured. 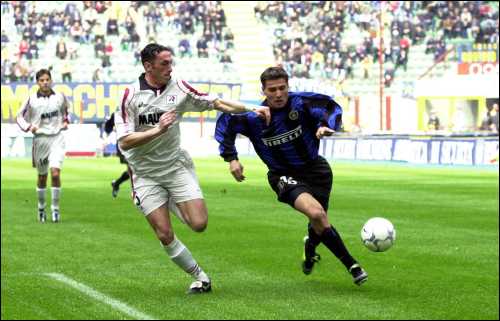 Mutu from his Nerazzurri days.

Fiorentina sit at 10th place, which does not really reflect the quality they can bring to the pitch. No matter what road problems they have (and they have road problems), at home they have a decent record: 7 wins, 2 draws, and only 2 losses. Not bad. Plus, they won an epic game last week against Palermo. Nothing gets a team's tail up like a 2-4 win. Especially over a quality team. 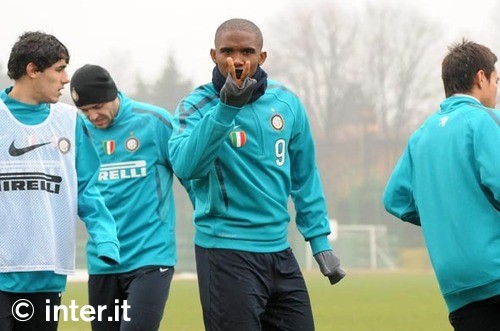 I dont know if this means Eto'o is out for three points or he is saying he wont flub up two games in a row. Either way, it works for me.

I guess the FIGC has decided that we can use our new guys for this make-up game because Leo has called them all up:

Lucio is still not ready to retun (damn), but it is nice to Stankovic and Mariga up there again. Chivu is out and will be until Samp at the end of the month. Thiago Motta is also suspended for yellow card accumulation. Milito is still in Argentina.

Leo got quite animated at his presser today, Mourinhoesque even. He defended himself a bit against the criticism that he doesn't put enough emphasis on defense, saying:

"I like beautiful football: take me or leave me. And also the people want to see beautiful football. And this team can do it: Inter today is the best team in the world. Are we here to cry? To cry about what? I am not here to join in these dramas. I'm sorry, but you can take me like this or leave me. I think of attacking football. The objective is to make a great game. If I cannot do this then I wont stay here my whole life. Italy is the cradle of tactics, it is a beautiful thing to see, but the love of football is born from the goal. I search for this, the people search for this. And then, a team that is attaching is not one who isn't defending."

As for the rest, he is not interested in crying over the loss, or criticisms that the squad is too old, or idle talk of this crises or that crisis; he wants to get on with playing and playing well. Good for him. After 40 days it was interesting to see what he looks like when poked a bit. I have to say, I like the passion. Still, now the pressure is on. He certainly got his fair share of bad press with Milan and he is no stranger to scrutiny, but this is a first for his career at Inter (though I am sure not the last).

He wouldn't let anything out about lineups, saying that he would choose tomorrow before the game. There is some speculation that with TM out for the game, Nagatomo would get his first start. I know that this worries many of you - we fear the unknown - but if he is going to play for us, he has to start sometime. Plus, this means Cuchu can move back into center midfield where he belongs. I am not going to attempt a lineup, you are free to if you wish. Unfortunately, if you are right you will have to make due with the smug self satisfaction of knowing you bested the ones who were wrong. That is to say, I dont have time for GIPATI certificates this week.

We all know that this is a must win for Inter if we are serious about top 3. We need these points. Unfortunately, so does Fiorentina. This will all come down to confidence and determination. In the end, Inter has to want it more. Because we all know what this team is capable of - we have seen it, lived it. They just need to remember... and believe.

Oh, and happy birthday to Ranocchia. He is 23 on February 16! Aguri, Froggy. I hope you get a Birthday Goal!

I just love these training videos.