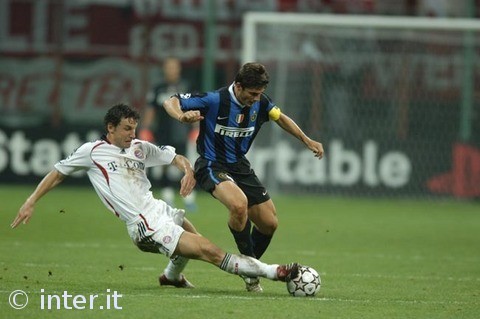 I wish I felt better about this game. Even more, I wish I could go back two years when the Champions League was just a write off for me. You know, something akin to winning the lottery: super great if it happened but so unlikely as to practically be impossible. And then it happened. And it was glorious. But now the expectation is there as well. Now we know and we have learned to want, and with the want comes suffering. What I have to remind myself is that success in the Champions League is special: it requires not only meticulous preparation but a hefty dose of luck as well. Last year, when we played Bayern, it was as if the planets were aligned for Inter - Inter's win felt like destiny. Something like that just doesn't happen all that often so I simply cannot be disappointed if things turn out a bit differently tomorrow. At least, that is what I tell myself. But it doesn't stop the wanting. Or the suffering.

What: FC Internazionale Milano v FC Bayern München, Champions League Round of 16, Day 1
When: Wednesday, February 23, 8:45pm local time (11:45am pacific, 2:45pm eastern)
Where: San Siro, Milan
How to Watch: Live on Fox Soccer Plus and here, ppv on UEFA.com and FoxSoccer.tv, or find a stream (MyP2P, Rojadirecta, Ustream, and ATDHE.me).
Liveblog: Kirby says yes so be here 15 minutes before kickoff.

If you miss it live, you can watch it delayed on Fox Soccer Channel at 2pm pacific, 5pm eastern. Basically, we got bumped for the ManU game.

Bayern Munich have come to the San Siro twice before. Both times, Inter lost. The first time was the second leg of a UEFA Cup round of 16 tie in 1988. They hammered us 1-3. They came again for a Champions League group match in 2006. They won that game 0-2 while Inter had two players (Ibra and Grosso) and an assistant coach (Miha) sent off. I think it must have been so traumatic that I have blocked it from my mind as I have absolutely no memory of this game. Not even the highlights jogged my memory:

Not so much fun. These are the highlights I wish I could embed instead (curse you UEFA highlight rights lawyers!)

And that's it. This is as far as I got and now I seem to have food poisoning so I am generally not interested in anything but bed.

Anyway, you can get everything you need to know about the match from the UEFA Match Press Kit.

Now, if you will all excuse me, I am going to go do something in the bathroom that is best left unsaid. :(