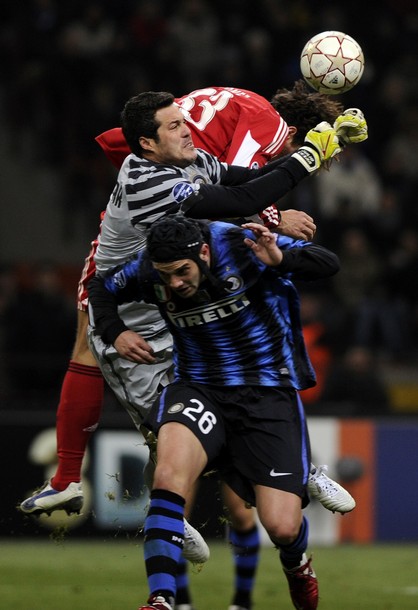 There was always the hope that Inter’s surge up the league table and advancement in the Coppa Italia rounds would translate into Champions League success. Like I said, there was always hope. Reality, on the other hand...

Depending on how you measure success determines how you view the result of this game. Inter’s play was a large step up from the last Champions League game they participated in – Benitez’s debacle against Werder Berlin. Against this perspective I can’t get too down in the dumps. Also, the fact that we are in the round of 16 at all considering the crap job that Benitez is also a huge plus financially.

On the downside, losing a game in the last minutes on a lousy mistake really sucks. Especially considering that 0-0 at home in the first leg of a round of 16 game is not a bad result at all for the home team. If that draw stood, 2 out of 4 outcomes would have been in our favor. Now, at 0-1, there can be only one outcome, or we go home. 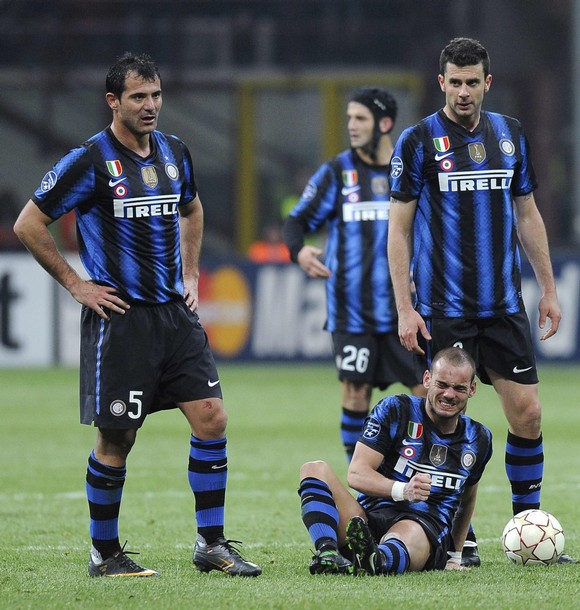 Cesar: Well, the game losing mistake occurred by Cesar spilling a hard but not even close to impossible to handle shot. But mistakes happen and I can't eat his lunch for that considering how many fingertip saves he makes. He's still a world class keeper and this mistake is jarring for it's rarity. 5.5

Maicon: One of the best chances of the game came through Maicon bursting through the right with the ball on his right foot in good angle for a good shot. Like all the rest of our chances, it was squandered. 6.5

Lucio: There aren’t many athletes that can come off a month long layoff and put in a very good performance in a tough situation. Hard to tell, but it looks like he missed Gomez following up the Robben shot that was spilled. 7.5

Ranocchia: Frog Boy was very, very good. He looked poised and asserted himself in the game. His exit from this game was a huge blow. 8.0

Chivu: We all knew that Robben’s side was going to be the only real problem area that we would need to deal with. Chivu did a very okay job, especially since he had Cambiasso helping him out. I thought that Chivu did a decent job as a center back also. He certainly looked more at home. 6.5

Zanetti: Javier had a very good game at both positions that he played in. I thought that his ability to tackle the ball and retain possession on the dribble frustrated the right side of Bayern. 6.5

Motta: As usual, Motta was doing a lot of the scut work in the middle of the field. I still have doubts about Cambiasso’s and Motta’s position switch. Motta’s vision and passing further up the field would have been helpful. As it is, players who bust their ass in defense and offense is okay by me. He was extremely unlucky not to score off a header off a corner late in the game. 8.0

Cambiasso: Cuchu looked a little lost out on the left. He did his defensive job and helped to double Robben, but he had two glorious practically open net shots deep inside the area and he wasn’t even close on either one. Plus, he was practically invisible when between the offensive and defensive duties. For a player who is built for the transition game like he is, he just wasn’t clicking tonight. 5.0

Deki: I thought that, like Cambiasso, he was one of the worst players we had out on the field. Now, he’s just coming back from an injury and all but Deki just didn’t look right. 5.0

Sneijder: Sneijder was kept pretty much under wraps on Wednesday. He made himself available and tried to work a lot of combinations with Eto’o but Bayern were too quickly closing in on him. 6.0

Eto’o: It’s hard to criticize Eto’o for his performance when we owe him a lot for keeping us afloat this season but he’s been in something of a slump that weirdly coincides with his temporary loss of form last season about this time. Maybe Eto’o just doesn’t like winter? However, he had a couple of chances that looked like had a good shot of going in. Considering how much ground he often had to cover and how many men he had surrounding him I am pretty impressed with what he was able to do – make some nice runs at the defense, make some dangerous passes and take a bunch of shots. I just can’t be too hard him for performing everything asked of him except scoring in a very tight, nervy game. 7.5

This game, like the one in May of last season, was a match of two teams who are on nearly equal footing. Last season, Bayern’s defense was a lot worse than ours, but this season the two are much closer in current form.

So like a lot of Champions League games, the difference was in the preparation and execution of the coaches overall plans and strategies. I think that a lot more should be said about how close and tense the game was from the beginning to the end and how well our players stood up considering the way this season has panned out. We, as supporters of Inter, have been on a roller coaster ride this whole year trying to figure which team will show up and which way the ball is going to bounce.

In terms of talent available, I thought going into this game that we looked to have an advantage over Bayern. On current form I didn’t think that either team really impressed me – as I said, Inter’s season has been up and down and Bayern has been almost a reflection in Germany, also having a challenging season for a team so large in reputation and finances.

On Inter’s coaching situation, I think that Leo was admirably astute in his plan coming into the game but I think that he was a victim of his inexperience while the game was actually playing. However, and I can’t stress this enough, I thought that his performance as a second year coach far outstripped the last offering of feces, embarrassment and imbecility that was Benitez’s last Champions League game with us.

I can’t tell you how much – even as a person who sees the Champions League as a money making tourney and not at all a romantically idealized competition of greatness – that last game against Werder made me hate Benitez. I can forgive almost everything else that man did while with this team, but that was such an unprofessional job that firing his lazy, fat ass was too good for him. My blood was calling for 3 days in a sound-proofed room, an unlimited amount of bamboo shoots, a chair with straps, 10 pounds of raw, diseased pork and earplugs.

Hooookay, I am back from my tangent, I hope you all enjoyed the trip. Leonardo’s Christmas tree worked well to create chances and allow us options in defense. But I thought that he had the wrong personnel out on the field and I thought that he was too timid in his substitutions. Deki was terrible from the get go. He provided little in defense and his contributions in attack were almost nil. He needed to start this game on the bench. Cambiasso, was terrible on attack, but he and Chivu did a good enough job on Robben – so he was at least useful in one phase of the game.

In an open game like this, Kharja’s ability to run back and forth and make sensible passes is really needed. This game was tailor made for his skill set. Leo was smart enough to put him in when a sub was absolutely vital. By the way, bringing on Kharja, moving Zanetti to left fullback and moving Chivu to center back was an astute move – even if it was a little forced by Cordoba’s absence on the bench due to injury. Bringing on Materazzi or moving Cambiasso or Motta back into the defense would have subtracted from their contributions not added Kharja’s.

But not bringing on Mariga for Deki and switching him with Kharja or not bringing on Coutinho nor Pandev as a straight swap for Deki was a mistake. Either of the three options available to Leo would have brought something to the table that Deki was lacking on the night. Leo’s defense for leaving well enough alone was that the team was creating chances. And he’s right to an extent. The team was creating chances, but it was creating those chances in spite of Deki and Bayern was having a much easier time than we should have allowed them because Deki did squat defensively. Actually, I wished he did squat. Squat would have been an upgrade over what we actually got from him.

But there’s nothing we can do now about it. Bayern played their game and capitalized on our mistake in a way that we failed to capitalized on theirs. A week or so ago I thought that we had about a 50% chance to get through and I think that we are still right around there. I still think that we have a better team and maybe we might recover Milito and Ranocchia for the next round. Bayern will have to defend their 0-1 lead on us and despite being at home, defending is not their strong suit. It will be imperative that Inter continue their good domestic league form though so that spirits and confidence remain high for the 3 weeks or so that separate us from the next Champions League nail biter.

Yes folks, even in defeat we have the MIPOG which no one will win since no one put forth My Inter Player of the Game - Frog Boy. I don't think that there is any doubt that Bayern looked more dangerous after Froggy left the field. Plus, it was his first Champions League game and he looked like a million bucks. 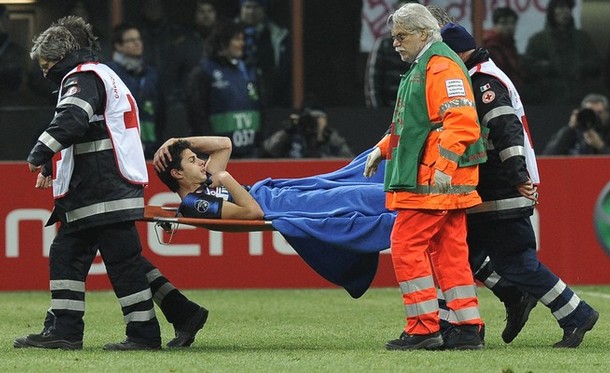 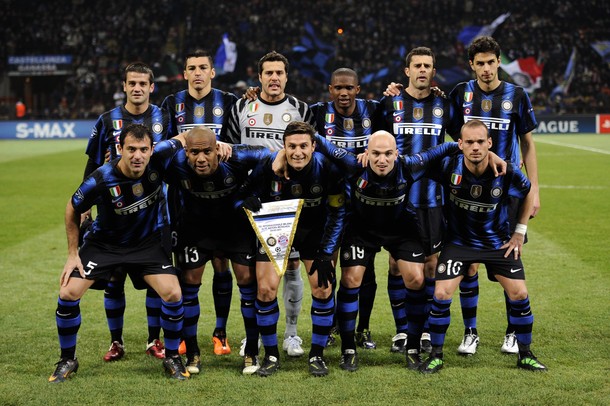