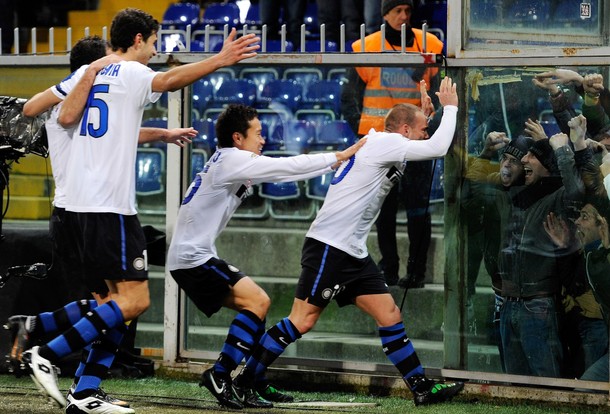 All games against Sampdoria are a test of your midfield. They flood their end of the field with tough tacklers and dare you to try to pass your way forward. If your midfield and fullback are found wanting then it’s going to be a long day for you.

If you can muster a piece of magic and force them to come out of their shell, then you have the job half done. The ‘doria attack isn’t what it used to be with Pazzini joining the Blue and Black and Cassano gone to some other team. The game today was a classic midfield slog between two tough teams that can take and give punishment.

To be honest the best team – on the day and in overall talent - won, but it’s always a battle. If I am not mistaken this is our first win away to ‘doria in 4 tries. Something like that.

Cesar: Okay, so Cesar is allowed to make a few mistakes per season and he answered the blunder he made against Bayern with a clean sheet and 2 goal saving stops today. You are absolved of all sin my son. 8.0

Nagatomo: Samurai had a hell of a game today. He ran the sideline, he made tough tackles and he passed the test that Samp tried to inflict on him when they mistakenly thought that he would be the weak point of the defense. How old is he again? 7.0

Lucio: Tough game from Lucio who battled all day in only his second game back from injury. It’s games like this that I can’t understand why we were able to steal him away from Bayern Munich in the first place. He’s a tough player and he had a nice touch on the ball today. He knew just when to put pressure on the other team and dribble it out of the defense forcing a reaction and open passing lanes… it just took him a while to figure out when to pass the ball. 7.0

Ranocchia: Frog Boy was absolutely immense. He made a tackle that was so beautiful… I… I still don’t have the words to describe it. And no, I am not tearing up about it, either. The fact is that it doesn’t matter who you partner him up with, he’s just an elegant, tough, smart player. I hope they extend his contract for another 4 years. 9.0

Zanetti: Not a spectacular game from Zanetti, but it was the usual strong showing that he usually has against Samp or a team like it. 6.5

Stankovic: I didn’t like Deki’s game today but I don’t know who else I would have put in his place. I know that he was out of position where he played today, but frankly, we have a lot of people who can play his position better than he can right now. Where will leave Deki at the end of the season? 5.5

Kharja: I think that I really nailed Kharja when I said that he plays his best when he’s able to range forward and pass and move because I saw him try to navigate through the slog today and he was just not having it. There was no space and the passes all had to be pinpoint to make it through so many legs. It wasn’t his type of game and his substitution was a very astute move by Leo and the coaching staff. 5.5

Sneijder: Remembering back to last season’s debacles against Samp it occurs to me that Sneijder was really trying to prove something in this game. Maybe I am trying to read too much into this but he was really pushing – not necessarily with a whole lot of success – to boss the game. The fact that he scored, I think, meant a great deal to him since he was definitely trying to be the hero today. 7.0

Pazzini: Well, we have come to the first game that I thought Pazzini disappointed in. I am not too distraught since I think that he has had such a positive impact on this team in the time that he’s been here so far. And it was his last team before joining us, the team that he found his professional success at. I’ll give him a pass, this time. 5.0

Eto’o: If Sneijder wanted to be the hero today, Eto’o wanted to be one today as well. He hadn’t scored in a few games and you could see that against Bayern he was pushing very hard for a goal and he was doing the same today as well. Last season he had a terrible winter that he had to work through, I hope we just witnessed his breakthrough for the winter. 7.0

I had three pros and three cons about the game today. But, before I get into that, I think that it was important for us to win today. Not just because of the table which, on a team like Inter, it is always a consideration. This win was important because we are entering the meat portion of the season here. I don’t want to go through the whole season as parts of the Easter dinner metaphor, so trust me when I say that we are at the meat section. If we can hold onto our relative position (that is to say second-ish and within grasp of the top team) from now until the derby in early April, we can have a Champions League (which is the single most important thing that we need to accomplish this season) place sown up and perhaps tempt our fates for the rest of it.

Okay three cons I had with this game:
1. We have three subs to use and a tired squad on the field. I understand that Leo thought that things were going well and that he didn’t want to wreck the connections that were happening on the field, but there were elements that weren’t working well. Deki for one. Pazzini probably could have been relieved of duties earlier as well.

2. We don’t have to use the same players every game. I understand that injuries dictate a lot of who we play, but the guys on the bench need to play sometime. Mariga needs time on the field. Not because he’s needed for this game, but because in April we might be in injury crisis again and it’ll be easier if we don’t have to play him into shape. Same goes for Pandev – who got some time, which is nice – and Nagatomo. Nagatomo is an injury and suspension salve right now but he’s a player and should see the field more. Deki… is another player that is starting to show his age this season.

3. We need to have some remedial defensive work. I know for a fact that Leo isn’t really training the defense tactics. And I don’t care. Baresi is more than capable as a former player and a coach of several years experience to run the defense through its paces. But there needs to be some remedial work on who goes with the runner, who stays at home, who attacks the ball, who sets the trap, who are the players in the wall on set pieces and what do the other guys do. We need a brush up before my coronary hits.

1. Using Frog Boy as much as possible is great. As bad as our defense was at Christmas, it’s miles ahead of that now. And that’s just the personnel change. When Walter Samuel comes back we will have a defensive rotation that could crush boulders. It’s almost mouth watering.

2. Keeping the 4312 in use as much as Leo is while knowing that he’s just itching to go to the 433 might actually be a sign of maturity for Leo. If we used the 433 today, I think that we would have been eaten alive. We need to have the bodies in the midfield collecting, distributing and most importantly, shielding. The formation that we have been using is our best bet to winning – in my opinion.

3. The going got tough against Samp early and a lot of nice combinations didn’t make it through the sea of the dreaded 9-1 formation, but the heads stayed up and the tails were still up and when a mistake occurred Inter were able to take advantage with an absolutely stunning free kick that the keeper had no chance to save. And once Samp found themselves in a position where they had to attack and things started opening up… well, Eto’o can only be denied for so long… But the idea that the team had that they were going to go for the win was very strong. Benitez couldn’t make it happen with this team. But the change in coaches somehow made the team believe/know that they were going to win. It’s an awesome thing to see in a team, that belief. 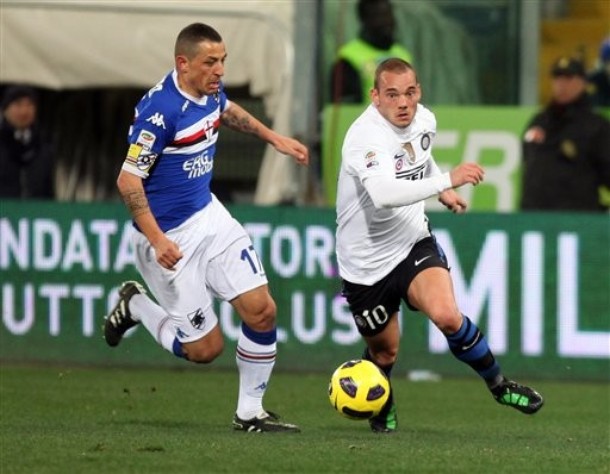 My first instinct is to give this to Julio Cesar because he had a bad game midweek. He came back this game and showed how much he loved this team and how dedicated he was to them. He didn't spill a single ball. He made a 1v1 save against Maccarone that probably saved a goal and the game. He's one of my favorite players and it really wrenched my heart to hear how despondent he was that he blew the game and possibly the team's Champions League chances.

But the more I watched the game the second time around, the more I realized how much Sneijder wanted to win this game. He got beaten up today - not that he's usually very protected in other games - just like he always is when he plays against Samp. Samp - and by extension a lot teams in Italy - like to defend Inter by pushing, kicking and punching Sneijder all game long. I have only seen one player get thrown out for fouling him - it was in his first game as an Inter player and Gattuso was already working a yellow. Anyways, he puts up with a lot of shit just because he's a dangerous player who happens to be short of stature. He proves how tough he is by making other teams pay - either with a nice pass, a shot on goal or with a wickedly curving free kick for a spectacular goal. So I'll give the MIPOG to Sneijder for proving what a tough little bastard he is. 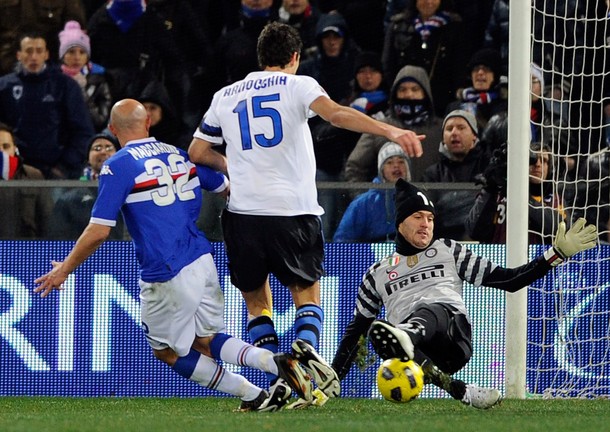