Bari v Inter: Going Down to Come Up

Share All sharing options for: Bari v Inter: Going Down to Come Up 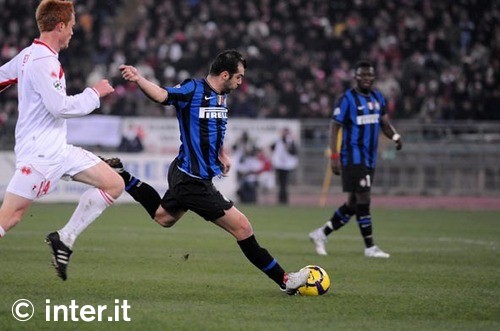 Inter next travel down to Puglia to see if they can pick up a couple of those points that have been dropped this week. Along the way, we may get to check out a new guy or two (hooray). Anyway, the weather should be nicer than in Milan and the atmosphere at the San Nicola is always electric. What's not to like? Is it just me, or do any of you have a an urge for cornflakes... with bananas.... mmmmm. Bari's crest always does this to me.

What: A.S. Bari v F.C. Internazionale Milano
Where: Stadio San Nicola, Bari (aka a seething cauldron of Inter hate)
When: Thursday, February 3, 8:45pm local time (11:45am pacific, 2:45pm eastern)
How to Watch: Live on Fox Soccer or one of these channels. Also, you could find a stream: MyP2P, Rojadirecta, Ustream, and ATDHE.me
Liveblog: I just jot it straight form Kirby and he said yes yes YES! So be here 15 minutes before kickoff.

Traditionally, Bari rules the San Nicola. As such, Inter doesn't have the best away record against them. Of Inter's 30 Serie A matches in Bari, they have won 33 (good) drawn 16 (meh) and lost 12 (yikes). The last time Inter won at the San Nicola, it was thanks to a double from Recoba way back in 2001. Of course, they spend the next 10 years in the lower divisions, so we didn't have much chance to play them.

Last year, this game turned into a penalty fun fest: the game ended 2-2 with three of those goals scored from the spot (2 for them, one for us). At the time, it was a fairly good result. Last season Bari won the vast majority of their home games so a draw was ok. Lets just say things are a little different this season.

There is a Bari board here on the Offside, and between Aaron and Mikey P, it is usually pretty well kept up. Check it out any way if you want a Baresi view of the game.

After finishing comfortably mid table last season, everything has gone horribly pear shaped for Bari this year. They are dead last with only 14 points. They have only won 3 games all season and they have the worst offensive and defensive records in the league (14 goals, 34 allowed). Really, it is shocking how badly they have deteriorated. Part of the problem is that last year's star forward, Barreto, has been out injured for some time (and is expected to be out another month). Plus, Bari no longer has either Bonucci or Ranocchia to shore up their defense.

Still, all is not entirely gloom and doom. They participated in the winter market, most intriguingly, bringing in the young Roma striker, Okaka, and the Norwegian, Huseklepp. Those two may be just what the Cornflakes need to drag themselves up the table. Okaka has already made his presence felt, scoring two goals in the two game he has played for Bari. Huseklepp says he is ready to go but I suspect he may need a little time to get used to the Italian game. With the influx of new talent, I think salvation is not unreachable for them. 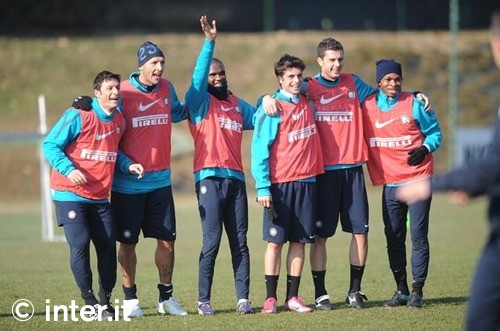 Who's ready to score some goals and win a game?

Ok. Deki, Lucio, Castellazzi, Samuel, Cordoba, and Mariga are all injured. Apparently, Stankovic is on the mend, though, and may be back for the weekend. Cordoba as well. Which is good news. You will notice that Sneijder and Cambiasso are on the list. I suspect that neither will start tomorrow, but that at least Sneijder will see some pitch time. He needs some minutes back in his legs before Roma comes to town this weekend (yikes). I expect Cambiasso to make the bench and only be called upon if things are truly dire. 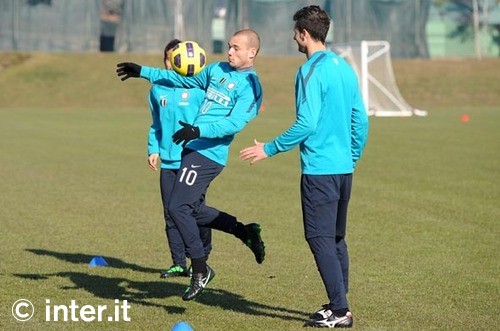 Hopefully Leo has worked his magic on Wes. I want Mou-era Sneijder, not that icky Benitez version.

As for the new new guy, I have no idea if Leo will throw them in or not. He did say today in his presser that Nagatomo is "ready to play his part," but I dont know if that means he is ready to play tomorrow. Certainly, Chivu could slot in with Ranocchia in central defense, but usually it takes a while for a partnership to develop and I dont think the two have been practicing together much. Plus, I am sure both Pazzini and Kharja will play at least some minutes and Leo may not want to run the risk of introducing too many new elements at once. 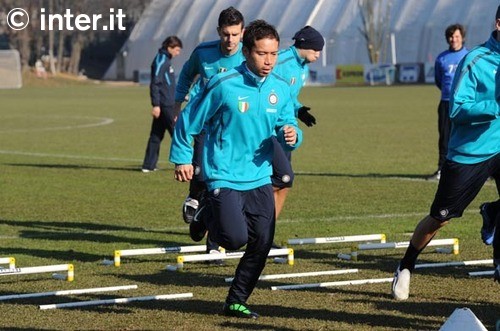 Once again, I am stumped with Leo. The will he wont he has totally paralyzed my ability to predict a lineup. I will throw it to you all - especially as no one has been declared the Grand Poobah of All Things Inter for quite some time. So, have a go and see if you can out Inter the rest of us. Plus you get the certificate - the personalized certificate - declaring your prowess for all to see. Years from now you can show your grandchildren and they will be duly impressed.

La Gazzetta gives us this prediction:

I dont think I can stress enough how important winning this game is for Inter and our standings. Every single team above us in the standings dropped points. All of them. A win will see us leapfrog Roma to third, on equal points as Lazio. Plus, as I say, Bari has only won three games. Three. It would just kill me if we made it four tomorrow. No. This is our chance. We need to reach out and grab it because opportunities like this dont come along every week.